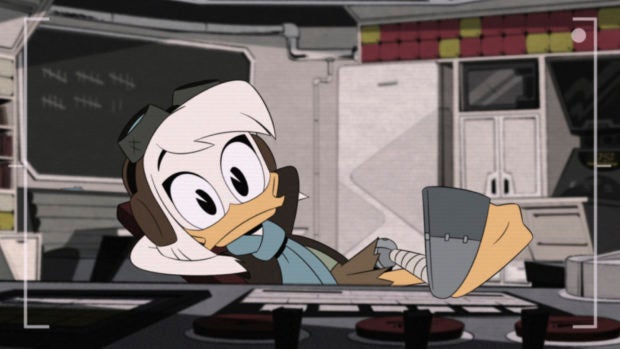 This photo provided by Disney shows a scene from “What Ever Happened to Della Duck?!” in an episode of the animated series “DuckTales” that airs Saturday, March 9, 2019, on Disney Channel. Image: Disney Channel via AP

Della Duck is a brave and resourceful fowl, the sort that refuses to be defeated by a solo crash landing on the moon — even when it costs her a leg.

Della, an elusive and lesser-known member of the Donald Duck family, took center stage in Saturday’s episode and quickly proved to be a groundbreaker, one of the few TV characters with a disability who’s part of a children’s series.

“Pretty cool robot leg!” Della says gleefully of the prosthetic she fashioned with debris from her ship, downed in a space storm.

The loss is handled off-screen: She is shown with her left limb trapped under spacecraft wreckage, then a short time later with the replacement.

Della, who’s had a minor and shifting role within her venerable flock, is depicted in “DuckTales” as Donald’s twin sister and long-lost mom to Huey, Dewey and Louie. In making her an amputee, it was critical to demonstrate that is only one aspect of her and her life, said the producers of the Disney Channel series.

“We got really excited about the opportunity to show an aspirational version of a character that has a prosthetic and that isn’t entirely defined by her prosthetic,” said Francisco (Frank) Angones, co-producer and story editor.

A spunky adventurer in the spirit of her family, she has a buoyant catchphrase to match: “Nothing can stop Della Duck!” In a story arc this season, Della focuses on getting back to her kids but must also confront the unexpected company she has on the moon.

Voiced by Paget Brewster, Della made a cameo appearance in the season-one finale and was seen as a young woman in last year’s holiday special. There’s more Della history: She was first mentioned in a Donald Duck newspaper comic strip and animated short film in the late 1930s, according to Disney.

She’s the latest example of “DuckTales” inclusive approach, said executive producer Matt Youngberg. The series debuted in 2017 as a reboot of the 1987-90 “DuckTales” show.

“We’re trying to make sure that unique and interesting voices are being heard, and that we’re embracing the differences in all types of people,” Youngberg said.

Jack Richmond, president of the Amputee Coalition, a nonprofit advocacy and support group, assisted in Della’s creation. He advised the series on elements including an authentic gait for Della and her can-do attitude, which he said reflects that of a determined friend who quickly adapted to becoming an amputee.

He’s optimistic about how children will receive Della with a prosthetic leg.

“Kids usually are the first one to adjust and move on. They tend to accept things and say, ‘OK, that’s cool.’ As adults, we struggle with it a little bit more,” Richmond said. Even a cartoon character’s depiction can carry over into the lives of young viewers, he said, allowing them to accept differences among people they encounter.

There’s more than enough room on TV for characters like Della. She and Julia, a Muppet with autism who’s part of “Sesame Street,” are rarities, said Jay Ruderman, president of the Ruderman Family Foundation, which advocates for inclusion for people with disabilities.

“If you are a child with a disability, you almost never see yourself (portrayed) in popular entertainment,” Ruderman said. “That’s why seeing a character with a disability is so empowering.”

The lack of such characters also affects how people perceive each other, he said.

“There’s so much stigma of people with disabilities being different,” Ruderman said. But positive portrayals on TV and in movies “can really change attitudes.” CC