CAMBRIDGE — Pop icon Lady Gaga, known around the globe for her flamboyant music and fashion, told Harvard students Wednesday that “a culture of love” is needed to combat school bullying and low self-esteem among teens. 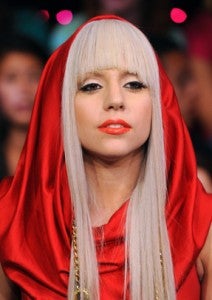 Appearing at Harvard with TV mega-star Oprah Winfrey, Lady Gaga launched her Born This Way Foundation — named after her hit album and single — which aims to boost teens’ self-esteem and encourage adults to help out.

“I’m not here today to give you an answer, and I am not here to tell you I can solve these problems,” Lady Gaga told a packed theater of Harvard students and faculty.

Lady Gaga said “it’s not that hard” to change the world through, for example, “little acts of kindness” and standing up for others being bullied or going through hard times.

The entertainer said her foundation will promote safety in schools and communities, help people develop skills to be loving and tolerant, and then encourage them to find opportunities to express themselves.

She added work needs to be done to reach out to bullies.

“What breeds anger?” she asked.

Winfrey, who interviewed Lady Gaga, likened the idea of a youth empowerment movement to earlier successful campaigns to reduce drunk driving and smoking.

“What you are creating is not just a foundation but a movement,” Winfrey said. “And literally by speaking out today, it is a shift that you want to happen, a shift in the way people think about bullying.”

According to the American Psychological Association, 70 percent of middle and high school students have experienced bullying and up to 15 percent of youth are chronic victims.

Some are fighting back: Katy Butler, a Michigan high school student who says she endured brutal bullying, has launched a petition at change.org now signed by 135,000 people to urge the Motion Picture Association of America to relax the rating of a new film, “Bully,” from R to PG-13 so more teens can see it.

By the end of the event, about 300 fans gathered in swirling snow to try to get a glimpse of the five-time Grammy winner.

Some fans had dressed for the occasion, as they explained, donning black leather boots, leather pants and leather jackets.

Lukas Freitas, a 19-year-old Harvard freshman, laughed when asked if his all-black leather outfit was his usual school attire.

“No, this is a Gaga outfit, in honor of Lady Gaga,” said Freitas, who managed to get a photo with her.

“She has been very important in helping me in developing my identity. I really like that she is using her fame to help people.”

Mark Mauriello, a 19-year-old Harvard freshman, was similarly dressed but with the addition of Lady Gaga-like sunglasses.

“I’m here because she’s an artist like no other. And it’s wonderful what she is doing because school bullying is a real problem,” Mauriello said.

Harvard and local businesses also joined Lady Gaga’s cause, donating part of profits from sales of cupcakes with her famous image in sunglasses and of cocktails with Jameson, her favorite brand of whiskey.

Nearby the event, a “Born to Be Brave” bus was parked that is the prototype of a larger bus that will follow her on when she tours, offering teens a safe place to create music and perform.

The entertainer sparked laughter when she said the bus will turn into a giant tailgate party where people can “hang out and talk about kindness.”

Sabrina Aguilar, an 18-year-old student at Simmons College in Boston who waited in the cold to see the singer, said she has witnessed kids being emotionally bullied.

Asked if anyone could solve bullying, Aguilar replied: “If anybody could, Lady Gaga could.”