Before Charice, there was Carina Afable 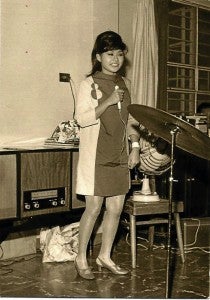 AS TEEN star, she hosted a number of musical-variety shows in the late 1960s and early 1970s.

Decades before Charice Pempengco was seen in “Glee,” another petite Filipina had landed a recurring role in an American television show.

“I came out in four episodes,” Carina told the Inquirer. (Now based in Los Angeles, California, she visited Manila in August last year.) “I was supposed to tie the knot with a regular character, Inspector Frank Luger, played by the late James Gregory.”

Unfortunately, the show was canceled in the same season that she got on board, in 1982. But Carina has no regrets about that. “It was fun,” she recalled.

She found the work system in Hollywood impressive. “On the first day, we had script reading. On the second day, rehearsals. Then, we taped the show in front of a live studio audience.”

She added, proudly: “The show’s props are now on display at the Smithsonian in Washington DC.”

After “Barney Miller,” she appeared in a string of commercials—for the Reggie Jackson barbecue grill and Wienerschnitzel hotdogs, among other products. “I even sang the jingle for Wienerschnitzel,” she said.

These days, however, when her name crops up in print, it’s usually before or after the words “Ryan Agoncillo’s aunt.” She explained: “Ryan is the son of my brother Chito.” Her real name is Carina Agoncillo.

Carina was the original star in the Agoncillo family—having cut her teeth as a performer in the noontime variety show “Stop, Look & Listen,” which was hosted by the late Eddie Mercado and which ran from 1968 to 1972 on ABS-CBN.

Before migrating to America in the late 1970s, Carina had a thriving career in local movies and TV. She top-billed several musical-variety shows in her teens—from “Chelsea Dance Time” to “Spotlight on Carina,” from “Carina” to “May I Sing to You.” 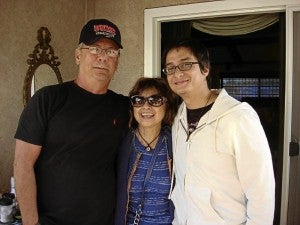 HUBBY Sam Gray with Carina and nephew Ryan Agoncillo in the United States.

During her August 2011 visit, the star became an audience member, watching the GMA 7 noontime show, “Eat Bulaga,” in Broadway Centrum, as Ryan’s guest. That gave her the chance to reconnect with comic Joey de Leon, her nephew’s cohost, who kept teasing her on air.

Carina recounted that she first met Joey when she sang with Norma Ledesma and Linda Magno in the ’70s girl group Hi-Pertensions. “Joey, who was a deejay at the time, would carry our glittery costumes whenever we had auditions,” Carina related.

Before that last visit, she was in town in 2001. “The main reason I came home after 10 years was to attend the 100th birthday celebration of my lola, Nena Agoncillo-Manalo,” Carina related. “She is the great-granddaughter of revolutionary heroine Marcela Agoncillo.” It was a huge event, she said. “The entire town of Rosario, Batangas, turned up.”

Last year, she hung out a lot with Ryan, his wife Judy Ann Santos and their kids Lucho and Yohan. “Lucho is so malambing (affectionate),” Carina said. “He always offers his cheeks to be kissed.” 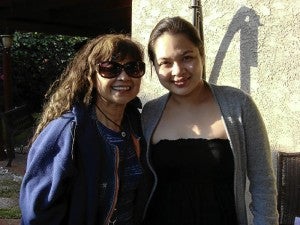 In the United States, Carina never treats Judy Ann like a celebrity. “She’s just Judy Ann, the take-charge girl we like playing board games with,” Carina said. When she vacationed inManila last year, she realized how huge a star Judy Ann was.

“I saw her commercial with Yohan on TV,” Carina said. “I was the same age as Yohan when I joined show biz.”

Yes, she was seven years old when she started tagging along with her late aunt, Dori Villena, who took her to different radio and TV stations in the 1950s.

“She introduced me to the big stars, like Eddie San Jose and Dely Atay-Atayan, on the ABS-CBN lot,” Carina said. “Tita Dori was my stage aunt. She badgered the executives to hire me for their shows.”

Her aunt’s persistence paid off. “I was cast in a lot of radio soap operas,” said Carina. “It helped that I could make my voice deeper and portray a boy. I also did a lot of commercials. One was for Carnation milk.”

As a child in the biz, she also met her idols Susan Roces, Irma Alegre and Charito Solis.

A big break came when she joined the radio program, “Botika sa Baryo,” which was later turned into a TV show, and then a movie, in 1960.

On the set of “Botika,” she developed a fast friendship with Marita Zobel, then an LVN star. “We were like sisters. I used to chaperone her when her late husband Boy Roxas was still courting her.”

When Marita left “Botika,” another singer-actress, Helen Gamboa, replaced her. Carina recounted: “On the set, a constant visitor was Helen’s niece, Sharon Cuneta. Sharon’s mom, Elaine, used to take Sharon to the location shoots. Little did I know that small girl would grow up to be the Megastar.”

Carina also acted in movies—“I’m a Tiger” with Helen and Chiquito, and “I’ll See You in September” in 1967 with Jean Lopez and Romano Castellvi. 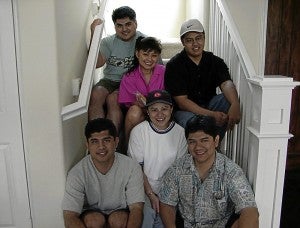 CARINA (in bright pink shirt) with her grown-up kids (clockwise, from top right) Chris, Robert, Cherry, Ronnie and Richie: They sing and jam at family gatherings.

In 1968, Carina acted with Bernard Belleza and Pugak and Tugak in “We Only Live Wais,” and with Chiquito and Zaldy Zshornack in “Agents Wen Manong.” In 1970, she starred in her last local film, “Intensity ’70,” which featured the top stars of that time—Novo Bono Jr., Eddie Mesa, Esperanza Fabon, Perla Adea, Boy Mondragon, Jeanne Young and Sahlee Quizon, among others.

Her most memorable film role, however, was opposite former President Joseph Estrada, Eddie Garcia and Barbara Perez in “Patria Adorada (Dugo ng Bayani).” For playing a nun in this action-drama, Carina was nominated for best supporting actress in the 1970 Famas awards.

Still, she considers television as her main medium. “I even had a children’s show called ‘Kiddie Land’ on Channel 5.” (“Spotlight on Carina” was aired on Channel 3; “Carina” on Channel 11; and the last one, “May I Sing to You,” also on Channel 5.)

She kept moving from one station to another because of her marital status. The teen star, who also waxed records on the Villar label, was already married to TV director Raul Silos then. “I became a mother at a very early age,” she said. “I had my eldest at 16.”

The kids came in quick succession. So as not to disorient conservative viewers, Carina would disappear from the boob tube every time she was heavy with a child—which was almost every year.

When martial law was declared in 1972 and the TV studios were padlocked, she found herself jobless. Live shows became scarce as well. 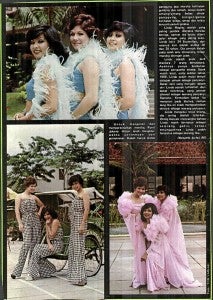 A MAGAZINE feature of the Hi-Pertensions, with Norma Ledesma (center, top photo) and Linda Magno (left, top photo). They top-billed concerts all over Asia.

She recalled: “Norma, Linda and I formed Hi-Pertensions. We had concerts all over Asia—we’d spend two months in Singapore, then move to Malaysia, then to Indonesia.”

In the 1990s, she had a reunion show with the Hi-Pertensions and the Reycard Duet (whose members have both passed on) at the Caesars Palace. “Norma is now based in the United States; Linda in Canada,” Carina said.

On her own, Carina did concerts all over North America and Europe (Germany and France), before deciding to try her luck in the United States.

After Raul and Carina divorced, she married American Leonard Bell in the 1970s. “We were together for seven years—until he passed away.”

Carina has five children: Richie, Robert, Cherry and Ronnie Silos and Christopher Bell. “And now I have a dozen grandchildren!”

In an e-mail, daughter Cherry described Carina as a “cool” mom. “She has developed a deep friendship with each one of her kids,” Cherry said. “We love her. We enjoy hanging out with her because she’s youthful and fun. Her grandkids adore her.”

Having a singer-actress as mom was a blast, said Cherry. “Growing up with a talented artist … we all learned to sing and play at least one musical instrument. During get-togethers, we 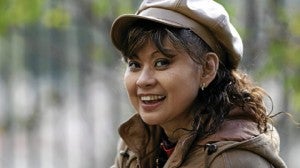 often jam as a family.”

Cherry explained that seeing their mom work hard at a very young age “instilled an exacting work ethic” in them. “She taught us to be self-sufficient. She deserves credit for the fact that we are all doing well in our respective careers.”

While Carina auditioned for shows and commercials in the United States, she also held a day job. The rat race can be grueling, she admitted. “To unwind, I sing. I do concerts on weekends. I let go onstage.”

It was in one of those weekend concerts that she met her current husband, Samuel H. Gray. “He used to watch my shows,” Carina said.

Cherry noted that her mom and Sam stick to a pretty active and vital lifestyle. “She enjoys life to the fullest! She and Sam travel a lot,” Cherry said. “Aside from getting together for the holidays and on special occasions, the entire family also tries to go on a major trip at least once a year.”

Carina currently works for the insurance company, Anthem-Blue Cross. “Our clients include the Screen Actors’ Guild, the Directors’ Guild,” she said. “It’s a large company.”

Last year, the couple flew to Tacloban to visit Sam’s relatives as well. “I thought my husband was an American. Waray pala,” Carina jested. “He was in the US Marines. His father was an American but he was born in Tacloban, where a lot of Americans decided to stay after World War II.”

They visited Leyte to check out a piece of property that her husband had bought. “He plans to build our retirement home there.”

Will Carina ever slow down?

Not in the foreseeable future.