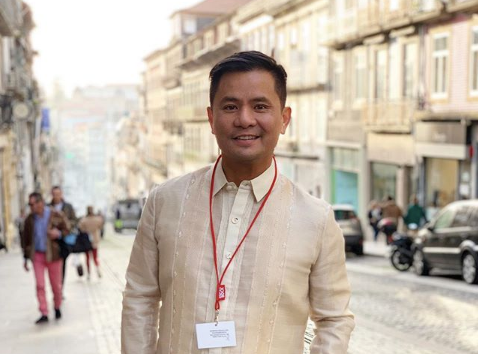 Alcasid took to social media on Feb. 24, sharing a photo of him at the Ninoy Aquino International Airport before his flight.

“Flying out to Portugal for 39th Oporto film festival,” he said. “Please pray for our film ‘Kuya Wes’ during its screening on Feb. 27. To God be the glory!”

Alcasid arrived in Portugal with director Mayo and made sure to snap a picture the moment they landed at the airport.

Before attending the film festival, Alcasid first went out and about to see what the country had to offer. He dropped by the Livraria Lello at the Vila Nova de Gaia, where he gushed about the historical bookstore.

“#livrariadelello the most beautiful bookstore in the world opened in 1906,” he said as he snapped a selfie.

He also took to the Dom Luís I Bridge where he posed with the gorgeous clear waters as his background.

Alcasid seemed to have felt right at home when he shared to his fans that Filipino food was offered to them by Philippine ambassador to Portugal Celia Feria.

Meanwhile, he looked dapper as he sported a barong Tagalog for the festival, as per his post on Feb. 28. He also carried with him a small Philippine flag when he posed in front of the festival’s poster.

He eventually had to bid the country goodbye, for now, but not without posing in front of the BMW taxi cab he took to the airport.

“My taxi cab to the airport! Ty #porto will definitely be back with the fambam by God’s grace,” he wrote on Feb. 28. “Such a wonderful experience joining the Fantasporto film festival. Have to head back now to my beloved Philippines and my wonderful family.”