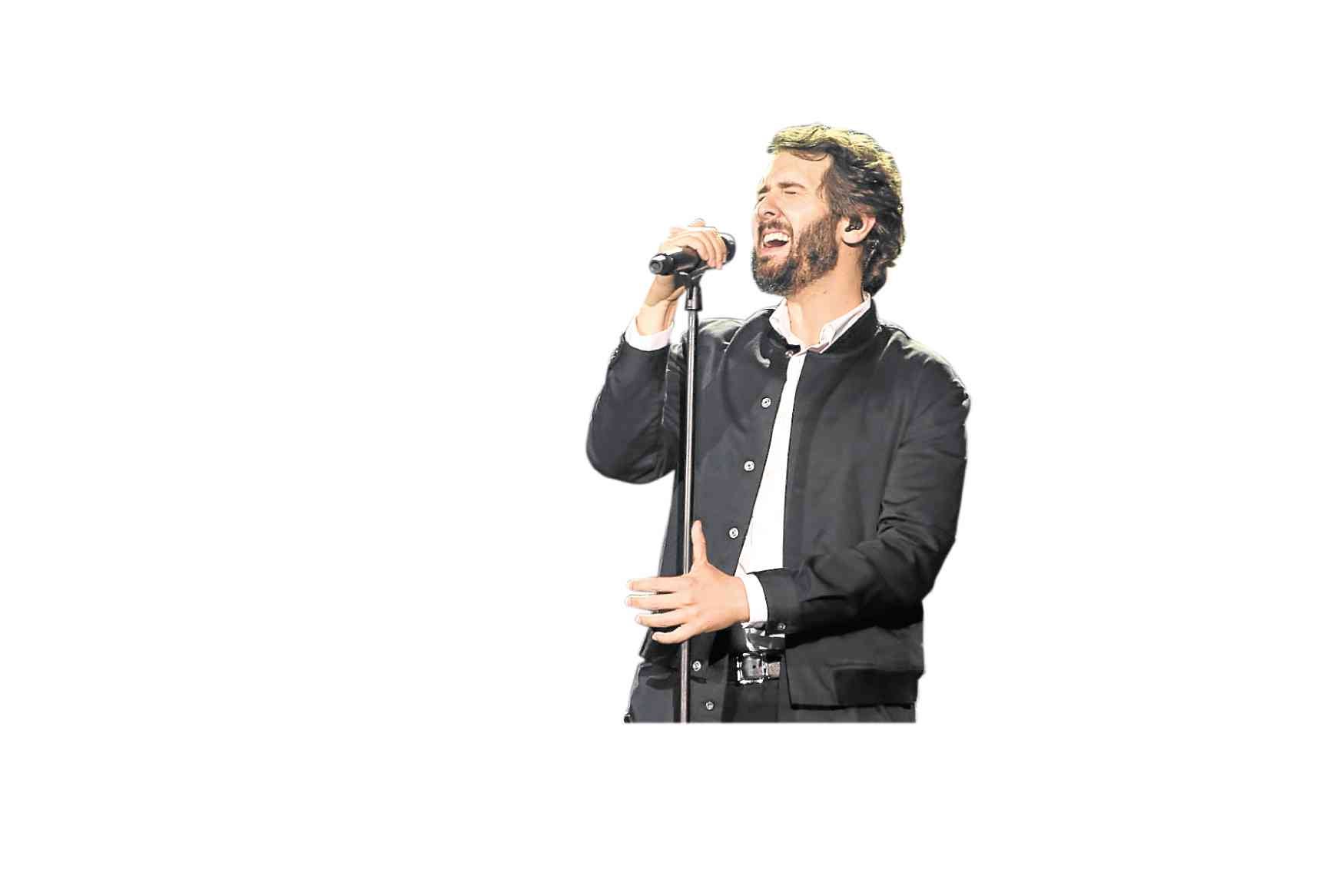 Josh Groban opened the show with an apology.

“I’m so sorry it took me 12 years to get back here. I remember fondly the first time I did a concert here … That and the time my debut album came out. I was told that, outside America, the Philippines was loving it,” he told the well-heeled crowd at SM Mall of Asia Arena, where the Manila stop of his “Bridges” world tour was recently held.

The last time Josh performed in the country was in 2007, to promote his third record, “Awake.”

Since then, he has released five more albums, appeared in four films and numerous TV shows, topbilled a Netflix series, and made his debut on Broadway.

“To have an audience so far away from home who appreciates  me and my songs, and wanted me to come over … I can’t tell you how much it meant to me then and how much it still means to me now,” he said. “It has been a dream to finally return here.”

But all was forgiven when he opened his mouth and started to sing.

His baritone voice flirts with tenor territory every so often. His tone is warm and reassuring; his singing, braced with thick vibrato. And he deftly wielded his instrument in tackling sweeping love ballads and orchestral pop pieces that evoked opera arias.

The slow-burning “You Are Loved” conjured up a picture of an imminent sunrise over the Savannah. “Bigger Than Us” was more upbeat with palpable rock elements.

In “Pure Imagination,” Josh reined it in and let his voice float, creating an air of whimsy. Behind the grand piano, in “She’s Out of My Life,” he sounded pained, almost crying.

“Bring Him Home” brought out some of Josh’s rawest, most committed singing of the concert; “To Where You Are,” on the other hand, his most controlled and resonant.

“You Raise Me Up”—one of his most popular hits—had Josh urging everyone to sing along, as the number neared its surging gospel climax.

“I have a lot of incredibly talented singers from the Philippines who are not stars—so many could-be-stars!” he said. “I know that music and singing are part of your lives.

With one of the night’s guests, Lea Salonga, who was still nursing a broken leg and came out onstage in a wheelchair, Josh performed “All I Ask of You”—much to the delight of the fans, many of whom fumbled for their phones and cameras to capture the moment. The two also did a rousing duet on “The Prayer,” which Josh hadn’t touched in five years.

Christian Bautista, who was packaged in Josh’s likeness—the songs, even the hairstyle—in his stint in the singing contest “Star in a Million,” joined the  singer for “We Will Meet Once Again.” It was a full-circle moment. 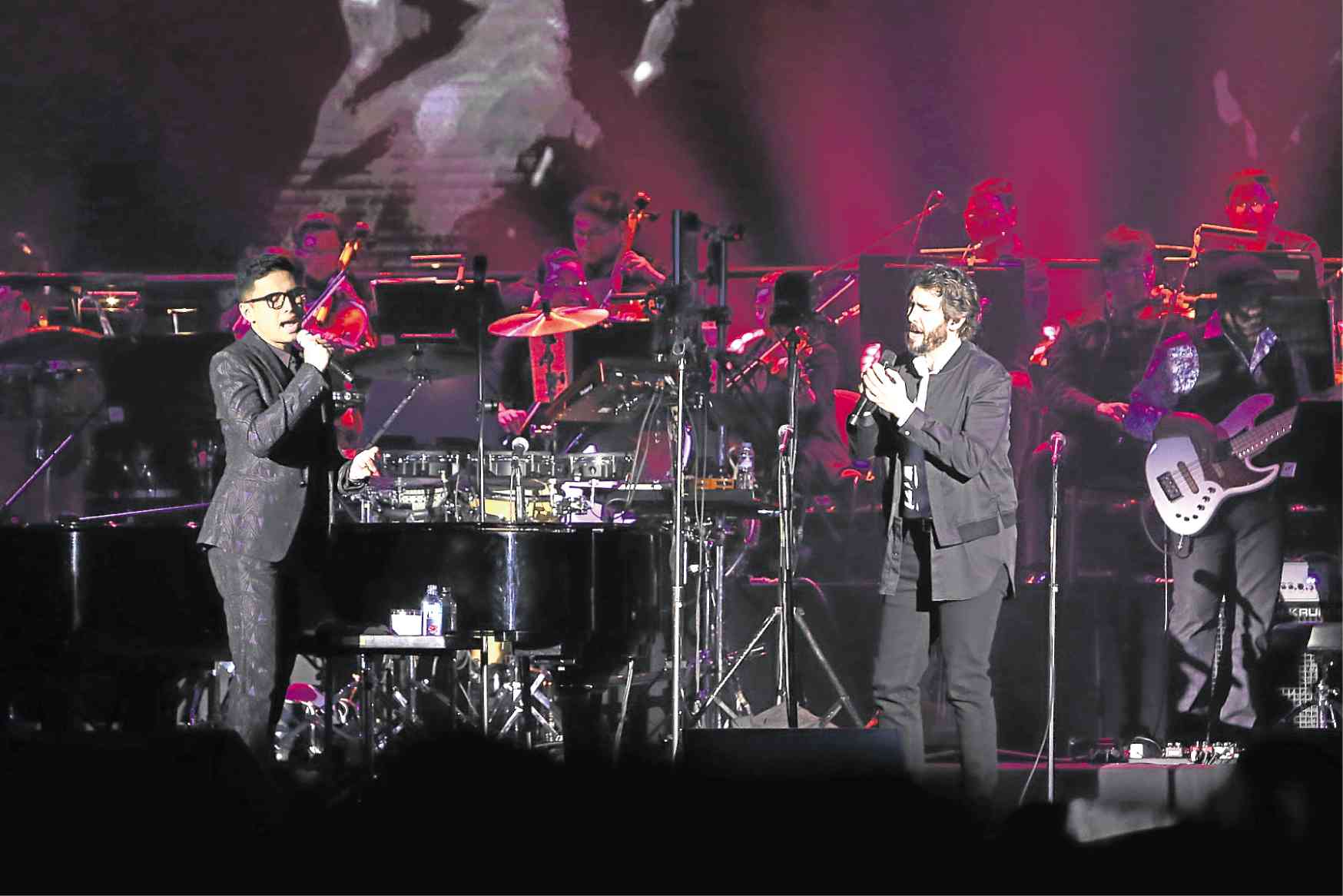 “Honestly, I sang your songs in a competition,” Christian told Josh. “Your music defined me when I was starting. Without you, I wouldn’t be here now. It’s true.”

Soon after bursting onto the scene in the early 2000s, Josh became a poster boy of sorts for classical crossover or “popera” music: A dorky young singer with curly locks whose singing scratched opera’s pomp and reveled in the accessibility of pop.

Now, at 37, Josh has stayed pretty much the same—earnest in his performances and charmingly awkward in between.

What has changed, however, since his last visit to the country, is that he’s no longer just a medium for other people’s work.

After “Awake,” the album, he took on a more proactive role in the creation of his material, writing most of the tracks in his subsequent albums, “Illuminations,” “All That Echoes” and his latest, “Bridges.”

The power of music

Through his own compositions, he highlighted the power of music beyond entertainment.

Music inspires. The song “Granted,” Josh related, was inspired by his childhood, of being a shy schoolboy who was able to break out of his shell, gain confidence and chase his dreams because of music.

Music heals. The country-tinged “River” is a composition dedicated to those suffering from depression or anxiety—things exacerbated by living in an “Instagram-perfect world.”

“Those are silent killers. The thing about depression is that it makes you feel like there’s no way out that door; that nobody wants to hear you. But that couldn’t be farther from the truth,” he stressed. “If you suffer in silence or know someone who does, take those steps and extend them a hand. You will be surprised how many are willing to take it.”

Lastly, music unites. While he didn’t write the classic “Bridge Over Troubled Water,” it’s a song that resonates deeply with him—a song about the tapestry of human condition, about togetherness.

“Having been able to travel around the world and see different cultures and ways of life … I have never, in my lifetime, seen the world so divided as it is today—so much fear, so much anger, so much otherism,” he told the crowd toward the end of the concert, mounted by Ovation Productions.

“Having music as something that bring us together in one place—no matter your beliefs, politics or whatever’s telling you to be afraid of each other outside of these walls—that’s privilege.”