LOOK: Marian Rivera in dreamy, ‘over the moon’ baby shower

Marian Rivera is not yet done celebrating for the upcoming arrival of her baby boy, as she threw another baby shower last Sunday, Feb. 24.

The Kapuso Primetime Queen hosted the baby shower in the theme of “Over the Moon.” It took place at the Marquis Events Place at Bonifacio Global City, Taguig.

Event stylist Robert Blancaflor was in charge of decorating the place for the celebration, with white balloons and fresh Ecuadorian Gypsophilas flowers.

“Such a beautiful, artistic way to welcome a new addition to this loving family,” Blancaflor said.

When you are “Over the Moon” in excitement and anticipation over the arrival of a new baby, a baby shower in that very theme is a wonderful way to celebrate. We created dream-like vignettes with balloon installations and fresh flowers to take Marian and Ding Dong’s guests to another dimension, one filled with clouds and fantasy scenes. Our @18th.ph pieces brought elegance and sophistication to the setup, with our S-shape table styled to perfection and filled with fresh Ecuadorean Gypsophillas. Such a beautiful, artistic way to welcome a new addition to this loving family! #OhBabyDantes @teenabarretto #RobertBlancaflorGroup #EventStylingPH #CelebrityPH #AllFreshRBG @marianrivera

Rivera appeared to be really happy with how the party looked, saying it felt “really clean, heavenly, bright and light” and it was “[a]n experience that [I] would like to relive to my son one day through these memorable photos.”

I really like last night’s set up! From the smoke effect, to the balloons, to the flowers and table settings— saktong-sakto! It felt really clean, heavenly, bright and light. An experience that i would like to relive to my son one day through these memorable photos. 👶🏻🍼❤️ Concept by @teenabarretto Event styling: @robblancaflor Mirror tables, chairs, and dinnerware: @18th.ph Technicals: @forscink_socials Special effects: @dragonfireworks.official Venue: @marquiseventsplacebgc Photos by @cocoonstudioph #ohbabydantes #teenabarrettoevents #marquiseventsplacebgc

What is a party without cake? Rivera also had a colorful and delicious-looking three-tiered cake, fit for the celebration’s theme. 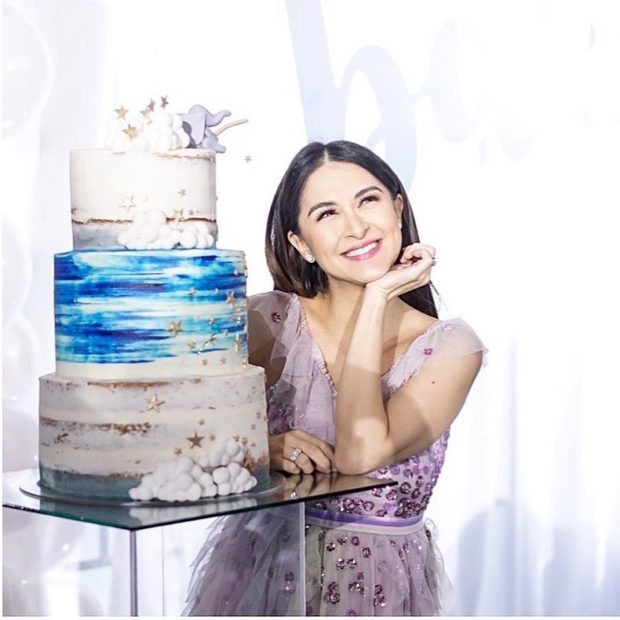 Her party was a star-studded event, with celebrity friends such as Ai-Ai delas Alas, Sheena Halili and Jennylyn Mercado in attendance. Bettinna Carlos served as the party’s host.

Baby shower of kambi — i miss you ❤️ #ohbabydantes

From hosting @dongdantes and @marianrivera 's wedding to Zia's babyshower and now to welcoming baby boy!! Always elated to be part of every milestone! Cheers to baby #2 and many many maaaany more beautiful ones to come! Congrats Compadre and Angeline!👶💙😁 #OhBabyDantes

Her husband Dingdong Dantes has earlier surprised Rivera with a baby shower last Feb. 16, at the Solaire Resort and Casino, Parañaque.

Rivera and Dantes first announced they were expecting another baby back in September. The two later revealed that they were having a baby boy, in a vlog last November 2018. JB