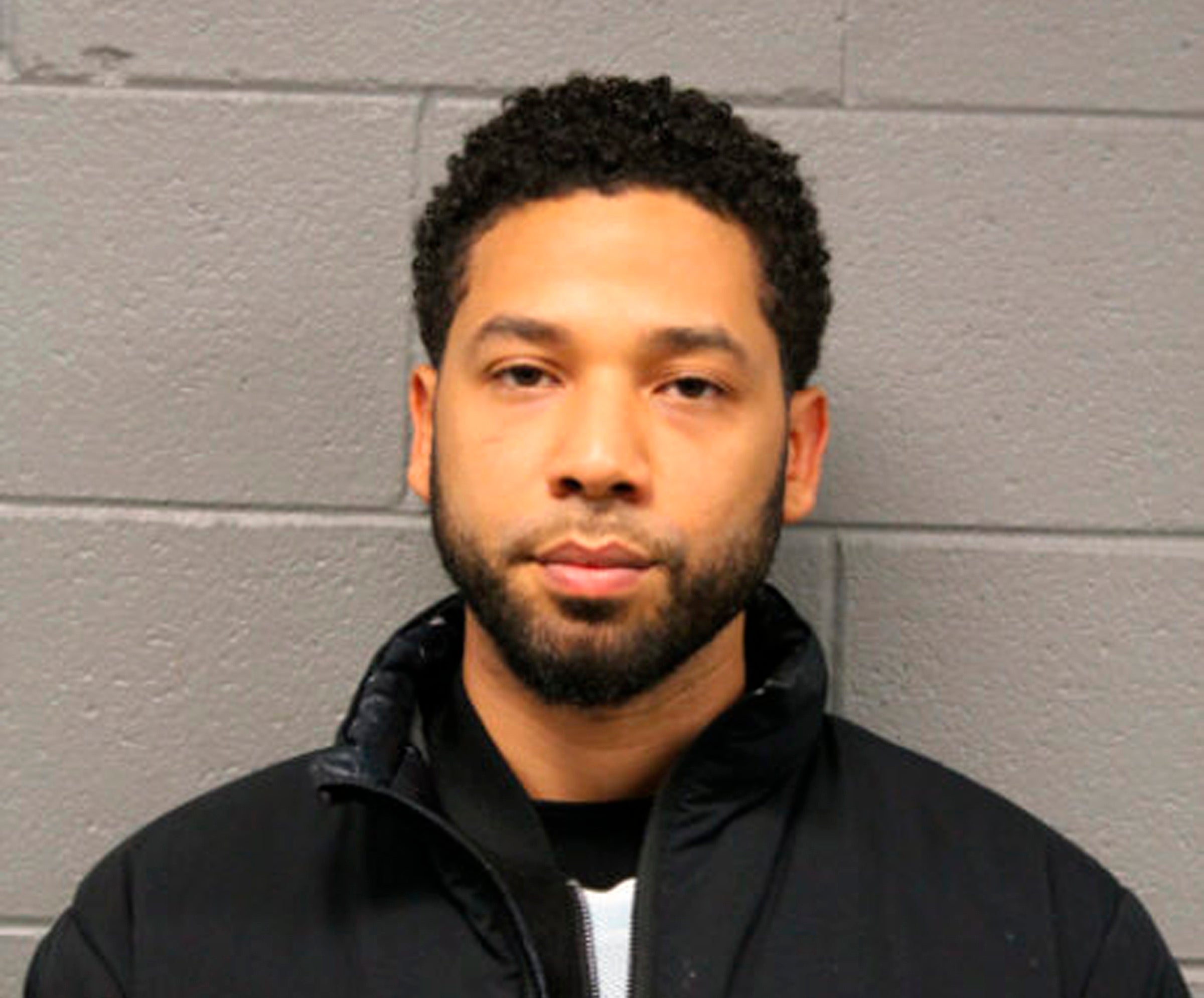 This Feb. 21, 2019 photo released by the Chicago Police Department shows Jussie Smollett. Police say the “Empire” actor turned himself in early Thursday to face a charge of making a false police report when he said he was attacked in downtown Chicago by two men who hurled racist and anti-gay slurs and looped a rope around his neck. (Chicago Police Department via AP)

CHICAGO — As authorities laid out their case against “Empire” actor Jussie Smollett, the narrative that emerged Thursday sounded like that of a filmmaker who wrote, cast, directed and starred in a short movie.

Prosecutors said Smollett gave detailed instructions to the accomplices who helped him stage a racist, anti-gay attack on himself, including telling them specific slurs to yell, urging them to shout “MAGA country” and even pointing out a surveillance camera that he thought would record the beating.

“I believe Mr. Smollett wanted it on camera,” Police Supt. Johnson told reporters. “But unfortunately that particular camera wasn’t pointed in that direction.”

Police said Smollett planned the hoax because he was unhappy with his salary and wanted to promote his career. Before the attack, he also sent a letter that threatened him to the Chicago studio where “Empire” is shot, police said.

Smollett, who is black and gay, turned himself in on charges that he filed a false police report last month when he said he was attacked in downtown Chicago by two masked men who hurled derogatory remarks and looped a rope around his neck.

The actor “took advantage of the pain and anger of racism to promote his career,” police, Johnson said.

“This publicity stunt was a scar that Chicago didn’t earn and certainly didn’t deserve,” Johnson added.

The attack reverberated well beyond Chicago and swiftly took on political overtones, with liberals calling it a shocking example of Trump-era hate. Republicans seized on the criminal charges as proof that the Democrats had rushed to judgment and unfairly disparaged the president’s supporters as bigots.

“The presumption of innocence, a bedrock in the search for justice, was trampled upon at the expense of Mr. Smollett,” the statement read.

Prosecutors released a four-page document that outlined their case against Smollett, who plays a gay character on the show that follows a black family as they navigate the ups and downs of the recording industry.

For the alleged hoax, Smollett solicited the help of two muscular brothers. One of them was Abindola “Abel” Osundairo, a friend he worked out with and who worked on the show as a stand-in for another character. He also supplied Smollett with the drug ecstasy, prosecutors said.

“He probably knew he needed somebody with bulk,” Johnson said of Smollett’s decision to hire the pair.

A few days before Osundairo and his brother, Olabinjo “Ola” Osundairo, were scheduled to fly to Nigeria, Smollett sent him a text that prosecutors said set the scheme in motion.

“Might need your help on the low,” he wrote his friend, according to the document.

During a meeting with the brothers, Smollett told them he wanted the attack to happen January 28 near his apartment in the city’s Streeterville neighborhood, and that he wanted them to get his attention by calling out slurs, prosecutors said. He is accused of instructing them to put the rope around his neck, pour gasoline on him and yell the MAGA remark, an apparent reference to President Donald Trump’s slogan during the 2016 campaign.

Smollett then gave one of the brothers $100 to buy the rope, ski masks, gloves and red baseball caps that resemble those worn by Trump supporters, according to prosecutors. He drove them to the spot where he wanted the attack to take place, taking time to show them the camera that he said would capture it.

He drove them home, wrote a check to one of the brothers for $3,500 and flew to New York, prosecutors said.

The time of the “attack” was pushed back to 2 a.m. January 29 because Smollett’s return flight was delayed. The brothers ordered an Uber ride to pick them up at their apartment and climbed into the vehicle toting their supplies, including bleach because there was a decision to use that instead of gasoline, according to prosecutors’ summary.

Police know much of this, they said, because Chicago has one of the world’s most extensive video surveillance systems. Investigators, in effect, pieced together the route the two men took by cab and foot to and from the scene, Johnson said.

The encounter lasted about 45 seconds. The brothers, Johnson said, “punched him a little bit,” but the scratches and bruises that Smollett had on his face were “most likely self-inflicted.”

When police arrived, he told them what happened and pointed out the nearby surveillance camera, prosecutors said at the court hearing.

Smollett also tried to mislead police about the suspects, telling them that the area around one attacker’s eyes was white skinned, even though the brothers are black, prosecutors said.

Johnson said Smollett used one of the most terrifying symbols of racial hatred — a noose — that is synonymous with lynchings.

“I’m offended by what happened and I’m also angry,” he said.

By the time Smollett appeared on “Good Morning America” on February 14, police already had a pretty good idea that he was lying, thanks to dozens of search warrants, subpoenas and extensive analysis of camera and phone records. They also knew the names of the brothers, and the fact that they had flown to Nigeria and were scheduled to return to Chicago on February 13.

The men were arrested and questioned for hours. At hour 47 — one hour before police had to either charge the men or release them — Johnson said the two confessed to what they had done. They were subsequently released without being charged.

Prosecutors charged Smollett late Wednesday with felony disorderly conduct — the charge that is used for filing a false police report. He turned himself in to police Thursday and was jailed until an afternoon court appearance.

Smollett’s attorneys asked that the actor be freed on his own recognizance, but Cook County Judge John Fitzgerald Lyke Jr. rejected that idea. Lyke, who is also black, said he was bothered by the allegations involving the noose.

“The most vile and despicable part of it, if it’s true, is the noose,” he said. “That symbol conjures up such evil in this country’s history.”

The judge set Smollett’s bond at $100,000, and the actor soon walked out of jail after posting the necessary $10,000. He declined to comment to reporters.

Smollett is earning more than $100,000 per episode, according to a person familiar with the situation. The person spoke on condition of anonymity because salary details were involved. The studio declined to comment on the actor’s salary.

As is customary with a successful TV series, regular cast members on “Empire” received a boost in pay as part of contract extensions that followed the drama’s renewal for a second season, the person said.

Smollett is counted among the series regulars.

The companies that make “Empire,” Fox Entertainment and 20th Century Fox Television, issued a statement Thursday saying that they were “evaluating the situation” and “considering our options.”

Smollett has been active in LBGTQ issues, and initial reports of the assault drew outrage and support for him on social media. Referring to a published account of the attack, Trump said last month that “it doesn’t get worse, as far as I’m concerned.”

On Thursday, he tweeted to Smollett: “What about MAGA and the tens of millions of people you insulted with your racist and dangerous comments!? #MAGA.” /kga