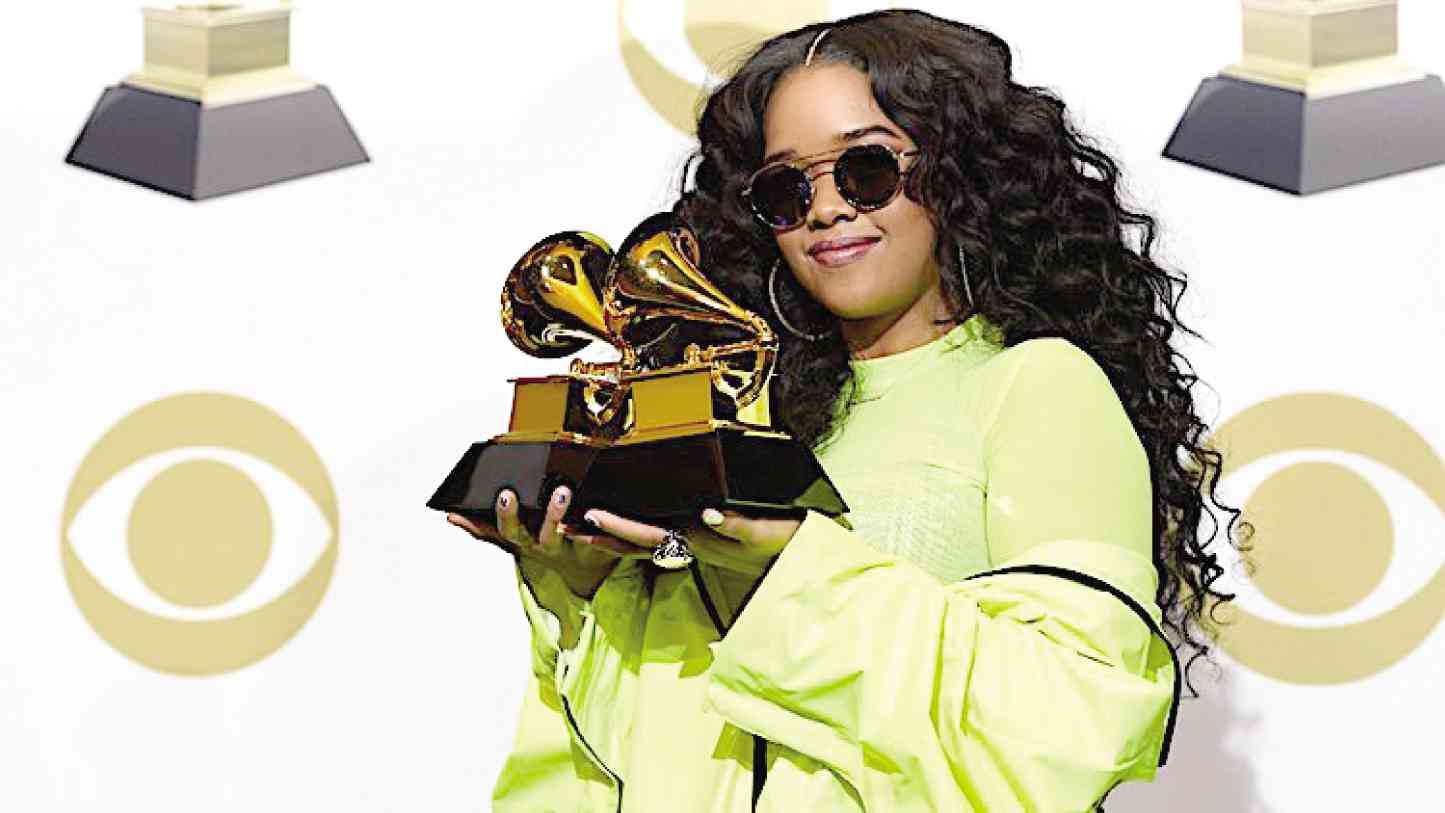 In 2016, R&B singer H.E.R. put up a vision board, on which she collated the things she wanted to achieve in the next few years—a Grammy nomination, 100 million streams, “things like that.”

In less than three years, she got exactly what she was hoping for—and more.

At the 61st Grammy Awards on Feb. 10, H.E.R. won two of the five categories she was nominated in: best R&B album for her self-titled EP and best R&B performance for “Best Part,” her duet with Daniel Caesar, which has been streamed more than 223 million times on Spotify alone.

In her postvictory backstage interview—a video of which was uploaded by the Grammys to its official YouTube page—H.E.R. said that the trophies were proof that she was “exactly where I’m supposed to be.”

“It means the world to me only because, it’s a confirmation. Sometimes, I have doubts. As an artist, you’re very sensitive about your art. And you feel like, ‘Am I doing the right thing? Am I making the right music?’” related H.E.R., who was born to a Filipino mother and an African-American father.

Now 21, she was first signed to a record label at 14, using her real name Gabi Wilson. In 2016, the singer-songwriter was relaunched as H.E.R. “I was playing music since I was 6 or 7. I felt that music was a given to me. But I didn’t expect to go this far. I just did it because I love it,” she said.

What made H.E.R.’s best R&B album win even more impressive was the fact that she has yet to release an actual album. The 21-track “H.E.R.,” which includes the hits “Focus,” “Losing” and “Every Kind of Way,” is simply a combination of her two previously released EPs.

“This is just an introduction to who I am,” H.E.R. said. “After I graduated from high school, I was like, let’s see what happens. I took the time to develop my artistry and my songs, and tried to figure out who I am and what my message is. And these projects are representations of that.”

All of the compositions on the EP are deeply personal to H.E.R., but more so “Focus,” which bares her vulnerability, and “Pigment,” which features spoken word—another passion of hers.

When does she plan to release her debut album? “Sometime soon. I’m in the process,” said H.E.R., who believes that her commitment to keeping a low profile has been beneficial to her as a musician so far. “I want to make it everything about the music; I want it to be at the forefront.”

On her Instagram page, she wrote that Feb. 10 was “the happiest day of my life.” She thanked her fans for coming to her shows, as well as her family, which “has been there since Day 1.”

In an interview with the Inquirer a week before the Grammys ceremony, H.E.R. said she was guided by the values she got from her Filipino mother, who’s “one of the kindest people I know.” “Giving, making an impact on people is something I definitely got from my mother,” she said.

Her musician father, on the other hand, was the one who introduced her to the music of Buddy Guy, Jimi Hendrix, Eric Clapton, B.B. King and Prince. “They were my inspirations,” H.E.R. said. “My father was also the one who bought me my first Fender guitar, and taught me the blues pentatonic scale.”

Now that H.E.R. has ticked off all the items on her vision board, it’s time to put up a new one—this time with more ambitious goals. “I’m in a space where it’s like, ‘Wow, what’s next?’” she said. “I have got to dream bigger.”