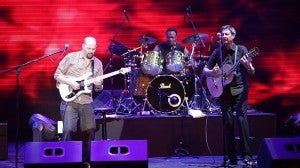 Greg Carmichael of contemporary smooth jazz band Acoustic Alchemy once said, “For a lot of people, instrumental jazz music is just sound that plays in the background.”

But on the ABS-CBN night of the 7th Philippine International Jazz and Arts Festival (Pijazzfest) held Friday at the Newport Performing Arts Theater of Resorts World Manila, Acoustic Alchemy and five other acts proved that the music was not merely air filler, but a multi-faceted art form that fires up the senses.

The rustic opener, “No Messin,’” conjured up images of long country drives, while the hard-edged “Urban Cowboy” pitted Carmichael’s acoustic guitar against Gilderdale’s electric axe in a ferocious sonic duel.

Other standout numbers were the reggae-flavored “Jamaica Heartbeat,” the Spanish guitar-inflected “Angel of the South,” and the catchy “Marrakesh,” which featured trippy synth riffs.

The band also delivered a soothing dose of swaying tunes, as well as a few tracks that could easily pass off as themes of ’80s-era TV series.

But what really got the crowd going were the band members’ solo spots—with the audience cheering and praising their improvisational skills. 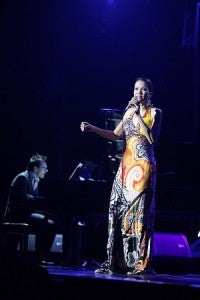 There was not much talk between numbers; the quintet preferred to take a no-nonsense approach in dishing out a guitar-driven set. And for one-and-a-half hours, Acoustic Alchemy drenched the atmosphere in bold, rousing harmonies and streams of syncopated rhythms that left the crowd asking for more, even after the curtains have closed.

Earlier, five opening acts delivered performances worthy of the spotlight and, at the same time, showed how jazz can take on many unique forms.

Renowned Israeli conductor-composer-pianist Yaron Gottfried for instance, utilized his musical genius to bridge classical and jazz music. On the piano, accompanied by a contrabass and drums, Gottfried  rendered a fascinating deconstruction of a Bach prelude, which he followed up with Modest Mussorgsky’s “Pictures at an Exhibition.”

Grammy-nominated cellist Dave Eggar and his band Deoro displayed versatility in a jazz fusion set that ranged from meditative tribal songs, to a rock-country number spiced up with a tap dancer.

Most enjoyable was Eggar’s take on “Carmen.” Through his jazz version of the Georges Bizet classic, Eggar took the crowd on a musical journey to Seville, and lightheartedly narrated the life of Carmen. And as the story neared its tragic resolution, the sensual sounds took a manic turn, with the flashy showman furiously bowing his cello, while the cymbals crashed louder and louder.

The show also featured Filipino-American musicians who have made waves in the global scene.

Tateng Katindig, son of legendary saxophonist Eddie K, is a sought-after jazz pianist in Los Angeles, and a regular attraction in US jazz clubs. Playing with Mar Dizon on drums and Roger Herrera on bass, Katindig tackled Herbie Hancock’s “United Blues”—his fingers deftly running across the keys, his feet stomping along the rhythm. 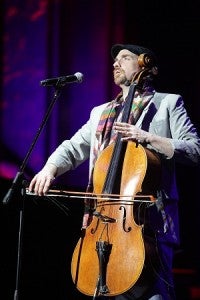 The youngest of the bunch was Abe Lagrimas, who made his debut performance at the Kennedy Center For the Performing Arts. After high school, he continued his studies and attended Berklee College of Music as a North American World Tour Scholarship recipient.

A multi-instrumentalist who also plays drums for top South Korean jazz group Prelude, Lagrimas stole the show with his musical technique. He wowed the crowd with a whimsical version of Michael Jackson’s “Human Nature” on the ukulele and a lullaby-like piece on the vibraphone.

He capped it with a showcase of his prowess on the skins.

The night’s lone vocalist, Charmaine Clamor, sang a series of tunes that blended jazz with the sounds and sensibilities of OPM—a musical genre that she calls “Jazzipino.”

By altering “My Funny Valentine” to “My Funny Brown Pinay,” Clamor sang of Filipina empowerment. “Brown is beautiful!” quipped the Los Angeles-based singer.

From the incessant requests for encores and the overwhelming reception that the crowd gave all six acts that night, it’s safe to say that jazz is, but definitely, much more than just background music.