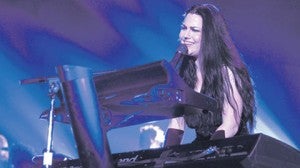 Nothing beats watching an honest-to-goodness rock concert. The latest gig that floored us for its awe-inspiring components was that of Evanescence, held recently at the Smart Araneta Coliseum.

The show was actually a twin-bill, with British band Bush playing a 10-song set that burned with hot musicianship.

Bush frontman Gavin Rossdale channeled his grunge roots through a no-frills, take-no-prisoners stance, howling out with passion on songs like “All My Life” and “Sound of Winter” (both from the band’s 2011 album “Sea of Memories”), “Greedy Fly” and “Everything Zen.”

A pleasant surprise came when Rossdale sneaked in some lines from Talking Heads’ “Once in a Lifetime,” revealing a fondness for New Wave music.

“I’m on fire,” he growled on “The Afterlife” (another track from “Sea of Memories”), triggering screams from women in the audience. Moments into the song, Rossdale jumped off the stage and walked briskly around the Big Dome, further stoking the fans’ excitement.

We went bonkers over a blistering cover of The Beatles’ “Come Together.” It had been ages since we last shouted out a song’s lyrics.

We’re glad to note that Rossdale has not lost touch of his artistic gifts, even after Bush split up not too long ago and he formed another band, Institute. The way he looked, sang, played guitar and danced like a young man made it difficult for us to believe that he’s 46. Then again, Mick Jagger is 68 (!), which just confirms our hunch that rock ’n’ roll keeps these guys hale and hearty.

It took a while before Evanescence went onstage, but the minute the band cranked it up, it seemed like the heavens growled with non-stop thunder.

It was hard to decipher the lyrics she was spouting in the succeeding numbers, but the sound was enough to bring smiles to many a star-struck, hard rock fanatic.

It was like hearing the soundtrack of the Apocalypse—except that this wasn’t a horrific scene of doom, but rather a cathartic expression of fears that ends in joy. 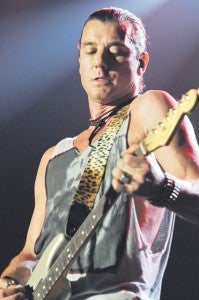 Mind-boggling was the way Lee belted out the high notes without letup, even as she conspicuously took a few sips of water after a few songs.

We thought things would cool down when Lee started playing on a baby grand and singing slowly, only to give way to another round of aural assault from the band.

Later on we realized we were listening to a wonderfully crafted sound that melded classical and heavy metal—seemingly disparate genres but whose complex passages and tempo changes virtually share a common ground.

In a fitting climax, the band capped its spellbinding performance with the hits “Bring Me To Life” and “My Immortal,” sending out a clear: Life sucks, but love makes it worthwhile.

Read Next
Jazz definitely not just background music
EDITORS' PICK
65% of Filipinos say Duterte’s health should be made public – SWS
Would the military allow me to stay this long if I’m inutile? – Duterte
DSWD chief admits ‘slow start’ in distribution of aid in ‘NCR Plus’
Pre-order the new vivo Y20s [G] to get a free TWS earphone
In good spirits: SMDC helps farmers and residents through Kadiwa Market
Smart three-peats as country’s fastest mobile network – Ookla
MOST READ
Vico Sotto frets getting photos of ‘butt vaccination’ from Pasig dwellers
Metro Manila to have shortened curfew hours from 8 p.m. to 5 a.m. under MECQ
San Miguel Corp. continues to invest heavily in the Philippines’ future
COVID-hit Roque slams ‘un-Christian’ query on how fast he secured hospital bed
Follow @Inq_Lifestyle on Twitter
Don't miss out on the latest news and information.