10 days before show time, a revolt over the Oscars | Inquirer Entertainment

10 days before show time, a full-on revolt over the Oscars 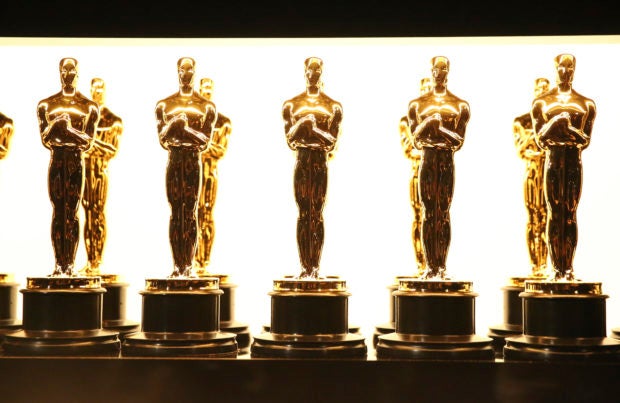 In this Feb. 26, 2017 file photo, Oscar statuettes appear backstage at the Oscars in Los Angeles. Responding to widespread backlash to the fact that four Oscars will be presented during commercial breaks at the 91st Academy Awards, the film academy has issued a statement reiterating that all Academy Award winners will still be included in the broadcast on Feb. 24, just not all live. (Photo by Matt Sayles/Invision/AP, File)

Would anyone — anyone at all — like to thank the academy?

This is normally the time of year when Oscar hopefuls are readying acceptance speeches that almost always begin with a few words of gratitude for the Academy of Motion Pictures Arts and Sciences. But that sentiment has been hard to come by in the torturous and troubled lead-up to the 91st Academy Awards.

After a litany of public-relations disasters, backtracks and missteps, the latest dust-up surrounds the film academy’s plans to remove four categories from the live portion of Feb. 24’s broadcast, including cinematography and editing, arguably the two most foundational components of moviemaking. The academy, desperate to reverse sliding ratings, says a shortened show must go on.

On Wednesday evening, dozens of Hollywood heavyweights — including Martin Scorsese, Spike Lee, Brad Pitt, cinematographer Roger Deakins and director Damien Chazelle — issued an open-letter to the academy’s leadership blasting the decision to not air the four awards, which also include live-action short and hairstyling and makeup, live on the ABC telecast.

“Relegating these essential cinematic crafts to lesser status in this 91st Academy Awards ceremony is nothing less than an insult to those of us who have devoted our lives and passions to our chosen profession,” the group wrote. “When the recognition of those responsible for the creation of outstanding cinema is being diminished by the very institution whose purpose it is to protect it, then we are no longer upholding the spirit of the Academy’s promise to celebrate film as a collaborative art form.”

The academy responded with a letter of its own, blaming “inaccurate reporting and social media posts” for “a chain of misinformation.” Signed by academy president John Bailey, a cinematographer, and other officers from the academy’s board of governors, the letter sought to assure members that the four winning speeches will be included in the broadcast (just not live, or with a walk to the stage) and that in future years, four to six different categories will be similarly truncated.

After years of #OscarSoWhite backlash, one infamous envelope mix-up and the reckoning that followed the expulsion of Harvey Weinstein from the academy, this year’s Academy Awards drama has been self-inflicted. In response to last year’s all-time low of 26.5 million viewers, the Oscars — the grandest and most glamorous award show ever created — are shrinking. And nobody likes it.

“People in general have a hard time with change. Change is sometimes hard to swallow. And I think the way that the news came out, it came out in the wrong way,” says Mary Zophres, one of the 54 members of the board of governors and a costume designer nominated this year for “The Ballad of Buster Scruggs.” ”But there is a need to make sure that the ratings are competitive.”

The academy’s headaches began after it last summer trotted out the induction of a “popular film Oscar.” The plan sparked such outrage (Rob Lowe pronounced the film industry dead, “survived by sequels, tent-poles and vertical integration”) that the new award was scuttled within a month.

Then Kevin Hart announced, himself, that he was hosting this year’s awards. When many took issue with his old homophobic tweets, the comedian initially “chose to pass on the apology,” inflaming the backlash. Within hours, he withdrew as host and, finally supplied an apology to the LGBTQ community. The Oscars are now host-less for only the fifth time in its 91-year history. The most recent, in 1989, resulted in an infamous duet between Snow White and Rob Lowe.

Other plans to tweak tradition also backfired. After first planning to limit the best song nominee performances, the academy confirmed that all songs will indeed be performed. “They made the right decision to include all the songs,” said Diane Warren, a nominee for the “RBG” song “I’ll Fight.” ”It wouldn’t be fair to just have two songs. That’s basically saying those other songs don’t matter.”

Some have blamed ABC, which owns the Oscar broadcast rights for the next decade, for pressuring the academy into some of these measures. ABC declined to comment.

Still, the negative response from prominent academy members was more than the academy’s leadership was expecting. Alfonso Cuaron, who’s nominated for four Oscars including best cinematography, has been among the most vocal critics, declaring: “No one single film has ever existed without CINEMAtography and editing.” Guillermo del Toro, whose “The Shape of Water” won best picture and best director at last year’s ceremony, said cinematography and editing “are cinema itself.”

“I don’t like it. I don’t think that’s a cool deal. I’m an artist so I believe we’ve all worked really hard, we’ve nurtured our gifts and we should all be able to celebrate them with the world,” says Regina King, a nominee for best supporting actress. “It just doesn’t seem like 15 minutes is gonna make that big of a difference.”

But the academy is insistent on getting the normally four hour-plus telecast down to three hours. Ratings for all award shows have declined in recent years, but it remains to be seen whether a shorter show will have any effect on larger viewing habit transformations.

What is clear is that the challenges of producing a big-tent, for-everybody broadcast are growing as mass audiences continue to fracture. For an institution like the academy, which has year-round involvement in things like film preservation and a much-delayed $400 million Los Angeles museum, the Oscar broadcast is the primary revenue generator.

“They make about six or seven million dollars a year off of the Academy Awards on television which pays for the academy,” says Michael Douglas, a two-time Oscar winner. “How do you put together an entertaining show versus (honor the winners)? So, I understand as far as a television viewing audience show, they don’t do a very good job.”

“I just saw the Grammys — best opening I’ve seen in a long time,” Douglas added. “Theirs is a three-and-a-half hour show that only has nine awards, you know? Because it’s all musical productions.”

But like the Oscars, Hollywood is getting smaller. This year, the 83-year-old 20th Century Fox, one of the “Big Six” major studios, will become part of the Walt Disney Co. More change is afoot. Netflix could this year win its first best picture Academy Award thanks to Cuaron’s “Roma.”

The irony is that all the attention on the host-less, controversial Oscar broadcast has meant no one is talking about the movies. And this year’s nominees, including the year’s No. 1 domestic hit, “Black Panther,” are one of the most-watched groups in years — exactly what the academy craves.

But with less than two weeks to go, some worry that the dust won’t settle by show time.

“People need to calm down about it before the Oscars and we only have like 10 days,” says Zophres. “What worries me more is actual unrest in the building before, during or after. So they need to make sure that everybody is under control.” CC