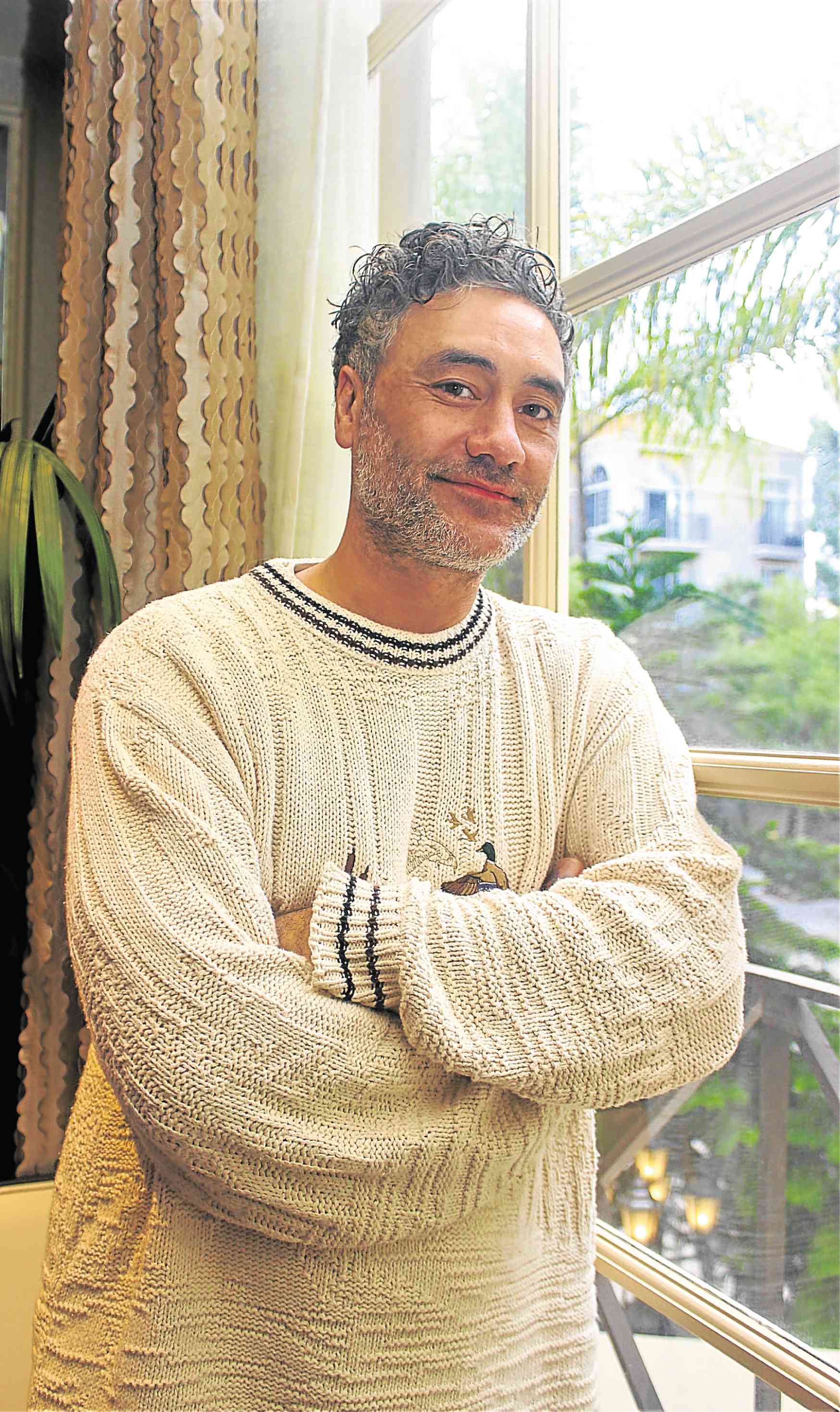 LOS ANGELES—After directing “Thor: Ragnarok,” which was a worldwide blockbuster hit, Taika Waititi next explores the “Star Wars” universe and returns to the world of vampires.

The multitalented New Zealander directs an episode of “The Mandalorian,” a live-action web TV series developed by George Lucas, and written and executive produced by Jon Favreau. Taika joins a pool of talents, including Bryce Dallas Howard, who directs the series set after the events in “Return of the Jedi,” but before “The Force Awakens.” The show will premiere on the new streaming service, Disney+.

When I asked Taika, who is also an actor and worked as a standup comedian, for an update on the series’ cast, he appeared stumped. “Pedro Pascal?” I asked. He grabbed my printout on the show and said, as he read while laughing, “That’s right, Pedro Pascal.  He’s great. Gina Carano. You don’t want to piss her off. Nick Nolte is in it? Wow. Werner Herzog is in it. I’m in it.”

Taika’s other TV project is FX’s adaptation of the 2014 comedy movie, “What We Do in the Shadows,” which he cowrote, codirected and costarred in with Jemaine Clement. Taika and Jemaine, buddies and fellow performers since college (HBO’s “Flight of the Conchords” is among their credits), shot the mockumentary about vampires who live together in Wellington, New Zealand.

Taika, honored as New Zealander of the Year in 2017, is busy with other projects. He directs and stars as Adolf Hitler in the dramedy “Jojo Rabbit” and has a “studio film” in the works that he was coy about. Perhaps another superhero movie?

What’s the latest on “The Mandalorian”? I just finished shooting “The Mandalorian,” a “Star Wars” TV show that’s going to be in Disney’s streaming service when it comes out. I’m helping direct it. It was a dream come true for me to be around and immersed in that “Star Wars” universe, and to just be next to a Stormtrooper.

How is “The Mandalorian” connected to the “Star Wars” story? It’s set after the end of “Return of the Jedi.” It’s the fall of the empire as we know it, and it’s before the rise of the new order.  That’s the little time period that “The Mandalorian” is in.

As you may know, Boba Fett is the bounty hunter from “The Empire Strikes Back” and “Return of the Jedi.” It’s not a race, but a creed of this collection of people who is made up of bounty hunters, mercenaries and fighters. And this is about one of these guys; the Mandalorian is a lone gunfighter.

At the fall of the empire, a lot of them were cast out and dispersed. They found themselves going into hiding and being guns for hire. The way I see it—I’m not sure if this is how Jon saw it—I felt that it was a bit like “Yojimbo” or ronin, a kind of Western, like lone gunfighters wandering from town to town, like that TV show, “Kung Fu.”

What does “Star Wars” mean to you? The first one I saw was “Star Wars: Episode IV,” but the one that meant the most to me was “The Empire Strikes Back.” I know that George Lucas did a lot of research into parent/child relationships and what it is to lose a parent or child. It’s one of the most spiritual films, and the ideas behind it are great. To create something that magical, with so many crazy creatures and spaceships, is amazing.

And for it to also have heart, be a great adventure and mean something … the idea of force and letting go of the ego, is all in those films. The idea of the force being in everything—there’s a lot of spiritual stuff in the films.

And what would it be like if you got a whole bunch of vampires together, put them in a flat, and they had to share and pay rent and buy their food. That’s where the movie came from and the TV version of that.

You and Jemaine played the lead characters in the movie. But in the TV version, Harvey Guillen’s Guillermo is the central character. Yeah, Guillermo is the one who leads us through the world. He takes the documentary crew around the house and gives them full access to the vampires’ world.

We needed a character who isn’t a murderer, is nice and is a grounding presence in the show.

Will you appear in the show? It’s all set in the same universe, so our characters are still in New Zealand, in the same house. They keep in touch, so they may make an appearance. My character fell in love.

It was way back in 2005 when you and Jemaine came up with the short film, “What We Do in the Shadows—Interview With Some Vampires,” that inspired the feature film in 2014. That’s a long time to be doing the same stupid idea. Yeah, we decided after the film came out that we wanted to keep doing things like this and thought about a film that would follow the werewolf, Rhys Darby, and Stu Rutherford and that crew.

But just the nature of how busy Jermaine and I have been in the last few years has made it very hard to get together and write a new movie. Just before I got signed to direct “Thor,” Scott Rudin got in touch with me. He had seen the film and wanted to see if I wanted to do a TV show.

I got “Thor” and I said to Jemaine, “It’s all yours.” I abandoned him, so he pretty much did all the writing and created this show.

It must be cool to see both you and Jemaine rise since you made that short film. I think about it with fondness. To have a best friend like Jemaine—I have known him for 22 years. We both went to the same university. We came from very similar backgrounds in New Zealand. It’s nice when it’s with someone you like.

Will you make a movie about werewolves in a movie or a TV show like this? Both. We should have the movie and the TV show (laughs). We would do it in New Zealand. Like “We’re Wolves”?

How did you find the actors to play the core vampires in the show? Jemaine had Matt Berry in mind for Laszlo right from the beginning. Then, we just did the usual casting call and got Natasia (Demetriou) and Kayvan (Novak). Just to have a show where they’re all British. We wanted them to have this European feel because all vampires in America are originally from Europe.

What other projects do you have? I am currently editing a new film called “Jojo Rabbit.” It’s a dramedy set in World War II. That will be out later this year, with Fox Searchlight. There’s another studio film that I’m not allowed to talk about (laughs).