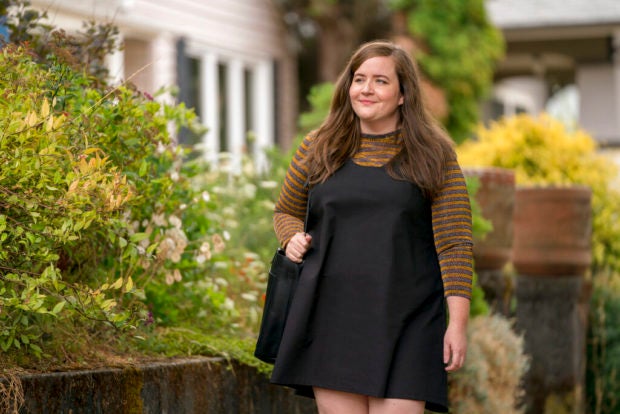 This image released by Hulu shows Aidy Bryant in a scene from the Hulu series, “Shrill.” The six-part comedy is based on Lindy West’s memoir, “Shrill: Notes from a Loud Women.” Image: Allyson Riggs/Hulu via AP

PASADENA, California — “Saturday Night Live” star Aidy Bryant says she was drawn to the Hulu series “Shrill” because of the chance to play a woman who is about more than her weight.

The six-part comedy debuting March 15 is based on Lindy West’s memoir, “Shrill: Notes from a Loud Woman,” which Bryant said struck a chord with her.

She identified with the book’s portrayal of a world that is “telling you you’re wrong for existing the way you do, even if you don’t feel that way,” Bryant told a TV critics’ meeting Monday. “You feel like, ‘I have a lot to offer the world and why do I have to do it in a size-two package?'”

But the series, which Bryant co-wrote, isn’t what she called a “fat festival” that’s obsessed with weight.

“Our show isn’t really about being fat and it’s also really not about dieting and it’s really not about her body,” she said of her character, Annie. Ultimately, she said, it’s what any TV show is about: a character trying to achieve her goals and the family and friends who surround her.

That circle includes a difficult boss (played by John Cameron Mitchell, co-creator of the stage musical and film “Hedwig and the Angry Inch”) and her close buddy (English comedy actress Lolly Adefope).

Abortion also figures in the show, as it does in West’s memoir.