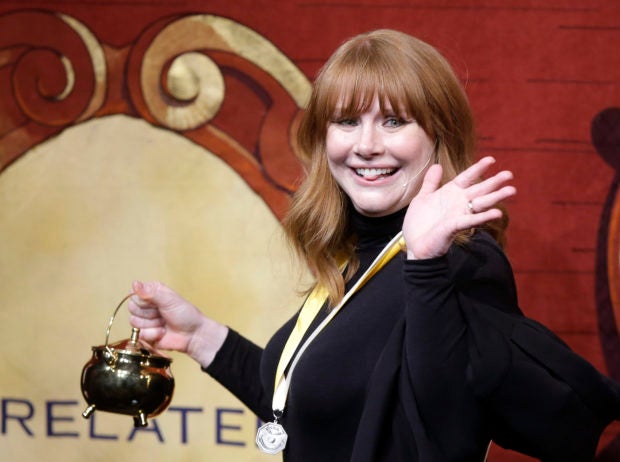 In keeping with the quirky traditions of the nation’s oldest collegiate theatrical organization, the 37-year old “Jurassic World” star was paraded through Harvard Square surrounded by extravagantly costumed performers then roasted by the young cast and handed a golden pudding pot.

“For some of the smartest people on the planet, you’re totally bananas,” Howard said on stage. “This is a blast. I’ll never forget this as long as I live. And please, accept my children to Harvard.”

Afterward, she told reporters she was grateful to be a part of the historic performance. “It’s about time,” Howard said.

The troupe announced last year it would end its policy of casting men only, which female students have protested in recent years by signing up and taking part in auditions anyway.

“One of great things about Harvard is experiencing tradition, but what’s also great is how these traditions are changing,” said Elle Shaheen, a 19-year old sophomore from Portsmouth, New Hampshire, who took part in last year’s audition protests and was cast this year. She played an evil prince Thursday.

Ashley LaLonde, a college junior who played a satirical version of a Disney princess in Thursday’s performance, said she was thankful for the opportunity, but also sad that so many generations of women missed out.

“This is the most professional opportunity available to Harvard students,” said the 21-year-old New Yorker, who hopes to pursue a career in theater. “It’s a real Broadway schedule. We get to spend time with celebrities. We have industry professionals who will come see these shows.”

Annabel O’Hagan, a 21-year-old senior from Richmond, Virginia, said the troupe is better for opening acting roles to women.

“It’s such a talented pool of women. I’m looking forward to fighting back at the stereotype that women can’t be funny,” she said prior to taking the stage as a flightless, sassy parrot.

To be sure, women have long been active behind-the-scenes at Hasty Pudding, including writing the shows, working on the technical crew and serving on the executive board.

Four of the board’s six members are currently women and the company is majority women, said organization spokesman Isaac Grafstein.

Of the roughly 200 people who auditioned for the current production, about 70 percent were women, he said. The troupe ultimately cast six men and six women.

During Howard’s roast, the cast gently mocked her for past roles in the Terminator and Twilight franchises.

They knocked her for her likeness to Jessica Chastain and other red-haired contemporaries in Hollywood. And they referenced her famous father, Academy Award-winning director Ron Howard.

Howard, for her part, said she hopes to focus more on directing rather than acting as her career evolves, not unlike her father. And she joked that her father has said the “Dallas” part of her name refers to the Texas city where she was conceived.

Howard also said she didn’t consider herself accomplished enough for Thursday’s honor, given how many other women are “really taking a stand and being courageous.”

“This inspires me to do more and contribute and give back,” she said. “Hopefully I will be worthy of this hilarious award.” CC