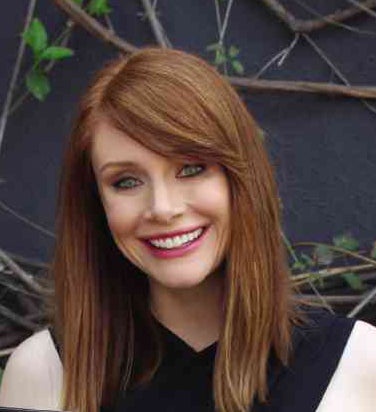 HOWARD. Her career just got hotter with the release of “Jurassic World.” photo by Ruben V. Nepales

LOS ANGELES—For somebody whose job is doing laundry, Bryce Dallas Howard is leading a very visible and high profile life. The actress said in a recent interview that her daughter Beatrice, 3, once told her that that’s what she thought her mom did for a living. Bryce’s “laundrywoman” career just got hotter with the release of “Jurassic World,” which now holds the highest worldwide opening-weekend record ever.

Bryce is the female lead opposite Chris Pratt in the movie which revisits Isla Nublar. Playing Claire, who oversees the park, Jurassic World, and its tourist-drawing dinosaurs, Bryce now has a movie franchise to her name.

The daughter of child actor-turned-Oscar-winning director Ron Howard and actress Cheryl Howard bagged her first major film role in M. Night Shyamalan’s thriller, “The Village.” The 34-year-old’s other credits include two “Twilight” movies (as Victoria), the acclaimed “The Help” and “Spider-Man 3.”

Bryce is married to actor Seth Gabel, with whom she has two kids, Theo, 8, and Beatrice. Excerpts from our chat with Bryce at the Universal Studios’ backlot commissary:

Talk about how much fun you must have had with Chris Pratt in making “Jurassic World.”

There was already humor in the film, but Chris brought a lot of levity to his character. He threw spontaneous dance parties. It’s great to work with someone who doesn’t take himself seriously in so many ways and yet is a true professional and just an unbelievably decent human being. It was a good experience.

Also, we both brought our families with us. I was there with my kids, and he was there with Anna (Faris) and Jack (son). That’s always so beautiful, as well—just to experience doing a film like this with our children around.

How did you meet your husband, Seth Gabel?

I remember every moment of that first date. In fact, I still own the sweater that I wore on that first date. He had just given himself a haircut. I’m happy to say that I have since “reformed” him.

In what ways have you “reformed” him?

I said, “Why don’t you go to a professional for haircuts? Let’s make this happen.” Then, in terms of the clothes, maybe they “disappeared.” He actually has great taste, but we all have to find our way.

How do you juggle your time for family and making movies?

Before this (“Jurassic World”), the last film that I did was “The Help.” That was four years ago. I got pregnant after “The Help.”

I got this film when my daughter was 1, but we didn’t shoot for another year. I have a funny story. I was working for short stints of time directing in Los Angeles. Now, the kids always come with me when I’m working, which is such a blessing. I don’t think I’d be able to survive otherwise.

I just filmed “Pete’s Dragon” in New Zealand. One day, I was leaving to go to work and my daughter was really upset. She didn’t want me to go. I explained to her that this was my job and that it’s very similar to her “job,” which is to go to school; that it is a necessity, and it’s how we pay for things, and it’s how I contribute.

What made her think that your job was doing the laundry?

Do you think you’re ready to direct a big movie?

It would probably be wrong-headed for me to say yes and no. It’s when you read a script—it’s all about what your instincts are in that moment for that story. Then, you reach out to collaborators, assemble a team, and it’s off to the races! So much of it has to do with the people behind the movie, and whether or not they believe you’re the right person for it.