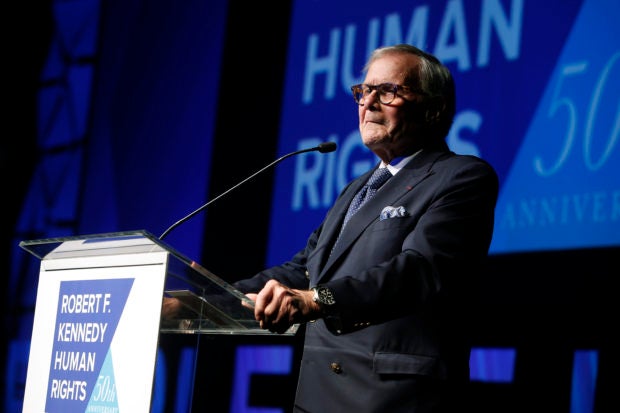 In this Dec. 12, 2018, file photo, journalist Tom Brokaw speaks during the Robert F. Kennedy Human Rights Ripple of Hope Awards ceremony in New York. Brokaw says he feels terrible that he offended some Hispanics with his comments on “Meet the Press” Sunday, Jan. 27, 2019, that Hispanics should work harder at assimilation. Image: AP/Jason DeCrow

NBC’s Tom Brokaw says he feels terrible that his comments on “Meet the Press” Sunday that Hispanics should work harder at assimilation “offended some members of that proud culture.”

The former “NBC Nightly News” anchor tweeted in response to a social media backlash to what he had said earlier in the day during a discussion of the proposed border wall.

On the show, Brokaw said that many Republicans fear the rise of a new constituency in American politics “who will come here and all be Democrats.”

“Also, I hear, when I push people a little harder, (people who say) ‘well, I don’t know whether I want brown grandbabies,'” he said. “I mean, that’s also a part of it. It’s the intermarriage that is going on and the cultures that are conflicting with each other.”

The 78-year-old journalist said he’s been saying for a long time that Hispanics need to work harder at assimilation.

“They ought not to be just codified in their communities but make sure that all their kids are learning to speak English, and that they feel comfortable in the communities,” he said. “And that’s going to take outreach on both sides, frankly.”

Brokaw received some immediate pushback from another panelist on the political talk show, Yamiche Alcindor of PBS. “I grew up in Miami, where people speak Spanish, but their kids speak English,” she said. “And the idea that we think Americans can only speak English, as if Spanish and other languages wasn’t always a part of America, is, in some ways, troubling.”

The web site Latino Rebels and its founder, Julio Ricardo Varela, pointed out online that a 2015 Pew Research Center survey found that nearly two-thirds of Latinos in the United States were born in the U.S. Hispanics make up 18 percent of the nation’s population.

The National Association of Hispanic Journalists also tweeted that it voiced its concerns about Brokaw’s “inaccurate commentary” to NBC.

Pew also found, in a 2016 survey of young Latino adults, that 41 percent say that English is their dominant language, 40 percent say they are bilingual and 19 percent speak Spanish primarily.

Brokaw’s comments are both xenophobic and factually incorrect, Varela said.

“We as a community are creating the new America right before your very eyes, Mr. Brokaw,” the Latino Rebels web site said. “Sorry if it doesn’t fit your perceptions of what America should be like. That future is bilingual, bicultural, at times in English, other times in Spanish. Our community is defining this future. Not you.”

NBC News had no comment Sunday on Brokaw, who has served in something of an emeritus role at the network since stepping down as lead anchor in 2004.

On Twitter, Brokaw said that he’s worked hard to knock down false stereotypes and pointed out that all sides need to work harder at finding common ground. He said he believes in “dialogue not division.” CC