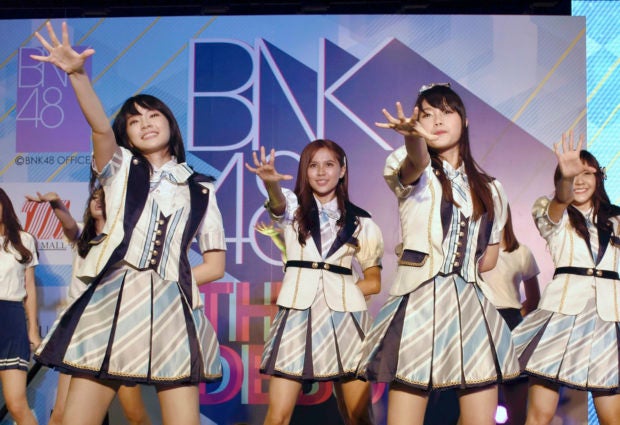 In this June 2, 2017, file photo, Thai pop band BNK 48 performs for the first time in a large commercial facility in Bangkok, Thailand. The popular Thai music act BNK 48 has set off a scandal after one of its members wore a shirt showing the swastika flag of Nazi Germany during a performance. Image: The Yomiuri Shimbun via AP Images

A popular Thai music act has apologized after one of its members wore a shirt showing the swastika flag of Nazi Germany during a performance.

The incident involving the girl group BNK48 occurred just two days ahead of International Holocaust Remembrance Day, marked Sunday with somber ceremonies in other parts of the world to remember the 6 million Jews and others killed in Adolf Hitler’s death camps.

Israel’s embassy in Thailand posted a statement on Twitter expressing “shock and dismay over the Nazi outfit worn by the singer.”

“Presenting Nazi symbols by the band’s singer, hurt the feelings of millions around the world, whose relatives were murdered by the Nazis,” it said.

The performer, 19-year-old Pichayapa ‘Namsai’ Natha, blamed her own ignorance for her actions as she delivered a tearful apology and asked for forgiveness. In the video apology made on the stage where the group usually performs, she dropped to her knees as she finished her brief statement and was comforted by fellow band members. Her apology was also posted on her Instagram account.

Management of the group, noted more for its marketing prowess than its musical abilities, also apologized that they had “inadvertently caused dismay and distress to people affected” by the historical crime against humanity.

Incidents involving insensitive use of Nazi symbols occur from time to time in Thailand, where there is little awareness of the Holocaust and an inclination to use them as design elements or comic props.

Past scandals have involved bars, restaurants, motels and clothing using swastikas and images of Hitler for decorative purposes. But on several occasions students at schools and colleges have mimicked Nazi regalia and rituals, including the ‘Heil, Hitler’ salute, in skits, artworks and ceremonies.

Thais are not alone among the peoples of Asia with little knowledge or sensitivity about the Holocaust. In what may be a mark of disinterest in history among the younger generation, several other youth-oriented music groups have been involved in similar scandals.

Late last year, management for the South Korean hit K-pop boy band BTS apologized for one of its members wearing a T-shirt depicting the explosion of an atomic bomb and another a hat with a Nazi emblem in a magazine photo book. Band members previously flew flags with what appeared to be the Nazi swastika during a concert.

In 2016, the producer for a Japanese all-girl “idol” group like BNK48 joined Sony Music in apologizing after the popular act performed in outfits resembling Nazi-era German military uniforms.

Keyakizaka46, a group of about 20 mostly teenage girls who sing and dance in synch, appeared at a concert in black knee-length dresses that look like military overcoats, and black capes and officer caps with a Nazi-like eagle emblem. Sony Music is the group’s label. CC

Doctor fired for threatening to give Jews ‘wrong meds’