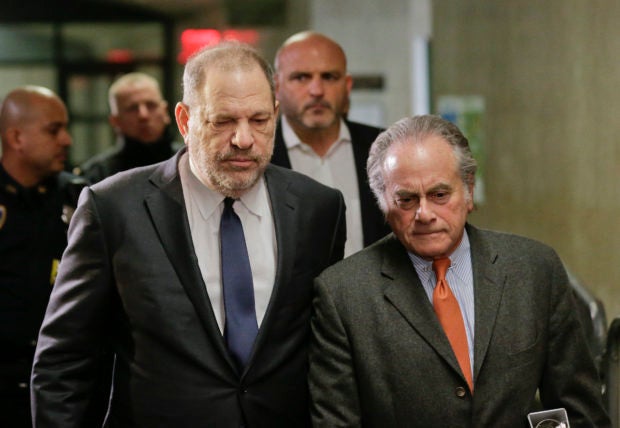 NEW YORK (AP) — Harvey Weinstein is recasting his legal team a month after losing a hard-fought bid to get his sexual assault case thrown out.

Weinstein and high-profile defense attorney Benjamin Brafman said in a statement Thursday that they “have agreed to part ways” and that new lawyers would be introduced next week.

The disgraced movie mogul’s trial is tentatively scheduled for May 6.

He is charged with raping an unidentified female acquaintance in 2013 and performing a forcible sex act on a different woman in 2006. A conviction could put him in prison for the rest of his life.

Thursday’s announcement came after days of speculation about Weinstein and Brafman’s future together.

“Both parties have agreed to part ways amicably and Mr. Brafman has agreed to cooperate fully with new counsel for Mr. Weinstein so as to ensure an orderly transition,” the statement said.

A judge must still approve the move.

Brafman, whose other celebrity clients have included Sean Combs and Jay-Z, has been by Weinstein’s side since he was arrested and paraded out of a Manhattan police station last spring.

The 70-year-old Brafman, a tactical and pugnacious litigator, appeared to embrace his role as the “Pulp Fiction” producer’s chief attack dog.

After Weinstein turned himself in on May 25, Brafman came out swinging, telling reporters: “Mr. Weinstein did not invent the casting couch in Hollywood” and that “bad behavior is not on trial in this case.”

He then scored a victory in the courtroom, getting part of the case dropped in October after evidence surfaced that a police detective had coached a witness.

Last month, however, he failed to convince a judge to dismiss the rest of the charges.

Weinstein has played a leading role in shaping his own defense, commuting from his Connecticut home to work with Brafman at his Manhattan office as a de facto paralegal.

The magazine reported that Weinstein was running Brafman’s strategy past other lawyers and advisers.

In the days before a Dec. 20 hearing on their failed bid to dismiss the case, Weinstein was peppering Brafman with emails and voicemails and showing up at his office after dark to work on strategy, the magazine reported.

Last week, in a statement responding to a Daily Beast article that he was looking for new lawyers, Weinstein said he was “looking to augment the team, not replace anyone.”

“Harvey is the type of guy who gets a second opinion on his tuna salad,” Brafman told Esquire.

In 2001, Brafman won an acquittal for hip-hop star Sean Combs after he was accused of toting an illegal handgun into a crowded Manhattan nightclub. In 2011, the lawyer helped former International Monetary Fund director Dominique Strauss-Kahn beat an attempted rape charge. The District Attorney’s office ultimately dropped the charges, saying there were inconsistencies in the accuser’s story.

Brafman used some of that playbook in Weinstein’s case.

He also piled onto police and prosecutors, seizing on the detective’s alleged misconduct and accusing Manhattan District Attorney Cyrus Vance Jr. of bowing to public pressure in the wake of the #MeToo movement.

Explaining his role in the Weinstein case, Brafman told The Associated Press last June: “I’m trying my best to save him in somewhat of an impossible situation he finds himself in.” CC