Adele sings songs in the key of love | Inquirer Entertainment

Adele sings songs in the key of love 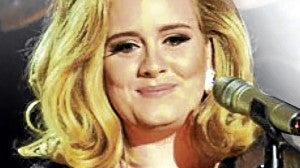 GETTING your heart broken is never pleasant. But, Adele doesn’t just cry over lost love—she channels her heartbreak into searingly intimate tunes that drip with honest introspection and lived-in pathos, making the 23-year-old the music biz’s most acclaimed new singing sensation.

Take “21,” her trailblazing second studio album: Initially, the British songstress didn’t want to perpetuate the romantic tragedian image “inspired” by her lovelorn ballads (“Chasing Pavements,” “Best For Last” and the deliciously idiosyncratic “Right As Rain”) in her No. 4-charting 2008 debut album, “19.” She wanted a lighter and more upbeat sound for her sophomore offering.

But, life sometimes has an off-kilter way of steering people in the right direction. In Adele’s case, it paved the way for her career-defining smash hits: After she played “Take It All” (the first song she recorded for “21”) to her then boyfriend, something went awfully wrong: Its lyrics (“Did I let you down?/ How can you walk away from all my tears?/ It’s gonna be an empty road without me…”)  unexpectedly stirred up a hornet’s nest that led to a bitter argument between the couple—and their eventual separation!

That fateful incident had Adele rushing to the studio, bursting with vengeful inspiration—and thus was “Rolling In The Deep” born: “There’s a fire burning in my heart/ Reaching a fever pitch, and it’s bringing me out the dark/ Finally, I can see you crystal clear/ Go ahead and sell me out, and I’ll lay your ship bare/ Think of me in the depths of your despair.”

In the stirringly woeful “Turning Tables,” she discloses how their relationship has come undone after the dispute: “Close enough to start a war/ All that I have is on the floor/ Next time I’ll be braver/ I’ll be my own savior.” Then, she owns up to her mistakes and asks her former lover to remember her at her best (“Don’t You Remember?”).

With her rich, sassy and full-bodied contralto fueling sleekly understated arrangements, the songstress soulfully captures the nuances of her heady emotional journey—by telling it like it is: In “Rumor Has It,” she lashes out at “friends” who have been spreading hurtful gossip.

In her moving cover of The Cure’s “Lovesong,” a burst of inspiration and renewed vigor is revealed in its shrewdly looping thematic conceit—in which Adele sings about new beginnings: “Whenever I’m alone with you/ You make me feel like I am (home/ whole/ young/ fun/ clean) again.” Then, as she embarks on a new love (“One and Only”), doubts haunt her again: “I don’t know why I’m scared, I’ve been here before.”

The “aftershocks” of the singer’s turbulent love life have found an artistic platform in her music—and, she’s successfully parlayed her romantic woes into pop-music gold: After her six-trophy sweep at this year’s Grammys (she won in all the categories in which she was nominated), she breaches another milestone this week—on the Billboard 200, where “21” marks its 21st (nonconsecutive) week at the top! It’s now the longest running No. 1 album in the SoundScan era, surpassing the 20-week run of Whitney Houston’s “The Bodyguard” in 1992.

Has closure come more easily with Adele’s success? Not necessarily—as “Someone Like You,” the repertoire’s final track, discloses in bittersweet detail: “I heard that you’re married now/ Guess she gave you things I didn’t/ Why are you so shy?/ It isn’t like you to hide from the light/ I hate to turn up uninvited/ But, I couldn’t stay away, I couldn’t fight it/ I had hoped you’d see my face and be reminded/ That for me, it isn’t over!”