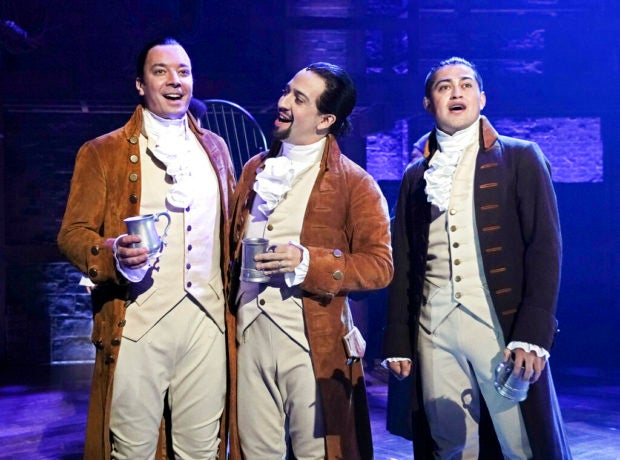 This image released by NBC shows Jimmy Fallon, host of “The Tonight Show Starring Jimmy Fallon,” left, with Lin-Manuel Miranda, center, and a member of the cast from the musical “Hamilton,” at the Luis A. Ferré Performing Arts Center in San Juan, Puerto Rico. Fallon will join the cast in a performance of “The Story of Tonight” from the Tony-winning musical which will air on Fallon’s show on Tuesday, Jan. 15. Image: Andrew Lipovsky/NBC via AP

“It’s a real celebration of Puerto Rico,” Fallon told The Associated Press of Tuesday’s episode of the NBC late-night show. “It’s not a pity party, it’s a party party.”

The show aims to boost tourism and let viewers know about other ways to help in the rebuilding, Fallon said. In return, the host promised, they’ll get a “full-on variety show.”

The inspiration to take New York-based “Tonight” to the island came from Miranda, who is of Puerto Rican heritage and told Fallon last year of his plan to stage an island run of “Hamilton,” which opened Friday in San Juan.

Miranda, with a little one-time help from Fallon, performs “The Story of Tonight” number from his Broadway hit on Tuesday’s broadcast. Miranda is raising relief money in the U.S. territory for artists and cultural groups that were devastated by 2017’s Hurricane Maria.

A music video with Fallon, Bad Bunny and “Tonight” house band The Roots was filmed in San Juan’s historic district and includes marching bands and dancers, the host said.

The show aims to highlight Puerto Rico’s culture as well as what it still faces after the disaster, including restoration costs estimated by the government at more than $130 billion.

Fallon said he’s been asked by some people why he and “Tonight” took on the complicated, costly episode when he’s not from Puerto Rico. He has a ready answer.

“But I’m American, and we’ve got to step up, we’ve got to help each other,” he said. “That’s the message that Lin and Jose are sending through their charities and what they’re doing.”

The pleased reaction from Puerto Ricans to the show’s presence was overwhelming, he told the AP on Monday: “I said ‘gracias’ so much, my Spanish got much better.”

“We’re always changing, always doing something different and always growing. And I think it’s good, as my mom would say, to get out of the house” and, for Fallon, hit the road to meet the show’s viewers.

While other late-night competitors such as CBS’ Stephen Colbert have made today’s contentious politics their bread-and-butter and enjoyed ratings boosts, “Tonight” has kept to its course as a mainstream show that reflects Fallon’s sunny demeanor. A lively hour with the potential to do good is in his wheelhouse.

During his brief island downtime, Fallon visited one struggling area still facing big challenges, including school closures. It’s not part of the episode, but viewers are given information on how they can donate to charities aiding in the island’s recovery.

Fallon, taking on the role of Puerto Rico’s tourism advocate, also strongly suggests taking an island vacation.
“You can have fun and that would mean just as much as giving. It’s a win-win,” he said. MKH

Read Next
R. Kelly accuser says he threatened to reveal her sex life
EDITORS' PICK
‘Not yet the end’: Lawyer says Marcos Jr’s DQ cases to take lengthy process
The best of bayside and city living at SMDC’s Sail Residences
Acer starts the year off strong with the Aspire Vero National Geographic Edition
Over 3 Million worth of prizes to be won at Smart Padala’s SENDali Manalo Promo!
Critical scenario: 3 Comelec vacancies just 3 months before elections
PH logs 37,070 more COVID-19 cases; over 33K others recover
MOST READ
Duterte asks: ‘Is COVID-19 airborne?’ Duque blames spread on ‘token compliance’ with rules
Morissette Amon recovering after confinement for diverticulitis, tests positive for COVID-19
‘Not yet the end’: Lawyer says Marcos Jr’s DQ cases to traverse lengthy process
Marcos camp ‘extends hand of unity’ after COC cancellation bid is thrown out
Don't miss out on the latest news and information.