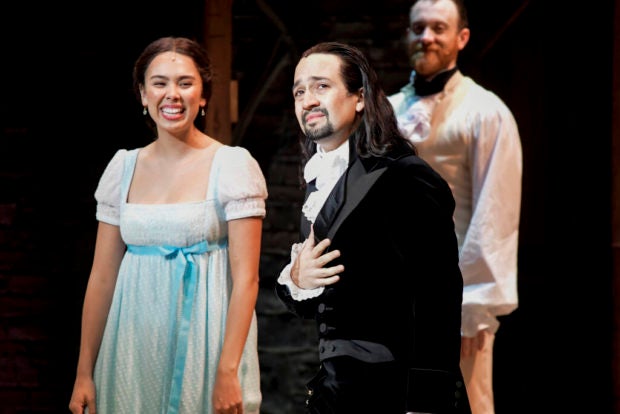 Lin-Manuel Miranda, composer and creator of the award-winning Broadway musical, Hamilton, receives a standing ovation with tears at the ending of the play’s premiere held at the Santurce Fine Arts Center, in San Juan, Puerto Rico, Friday Jan. 11, 2019. The musical is set to run for two weeks and will raise money for local arts programs. Image: AP Photo/Carlos Giusti

SAN JUAN, Puerto Rico — Lin-Manuel Miranda reprised his lead role in the hit musical “Hamilton” on Friday night to start a two-week run in Puerto Rico expected to raise thousands of dollars for artists and cultural groups struggling in the wake of Hurricane Maria.

The audience giggled, hooted, clapped and tapped their feet throughout the performance as Miranda took the stage for the first time since his last appearance in the Broadway version in July 2016, when he played the role of U.S. founding father Alexander Hamilton.

“I have never felt anything like that,” he said of the crowd’s energy, adding that singing the song “Hurricane” was a challenge. “It was very hard to sing that here in Puerto Rico because you know better than I what it is to survive a hurricane. I feel like I’m going back to Maria a little bit every time I sing it.”

After the two-hour show, Miranda spoke with reporters, who peppered him with questions about how the White House was exploring diverting money for border wall construction from a range of accounts, including using some of the $13.9 billion allocated to the Army Corps of Engineers after last year’s deadly hurricanes and floods.

“I think that’s absolutely monstrous,” Miranda said as he apologized that he didn’t have further comment. “It’s the first time I’m hearing that. I’ve been a little busy.”

Among the attendees was Ron Chernow, the Pulitzer Prize winner whose biography of Alexander Hamilton inspired the musical. 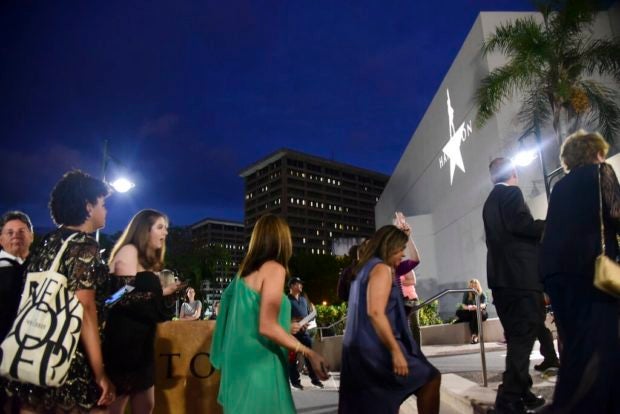 People line up in the entrance plaza of the Santurce Fine Arts Center moments before the premiere of the award-winning Broadway musical, Hamilton, starring its creator, New York native of Puerto Rican descent Lin-Manuel Miranda, in San Juan, Puerto Rico, Friday Jan. 11, 2019. The musical is set to run for two weeks and will raise money for local arts programs. Image: AP Photo/Carlos Giusti

He told The Associated Press that it was the most extraordinary Miranda performance he has seen.

“There was an extra passion and pain and sadness and beauty that he brought to his character,” Chernow said. “This was no ordinary performance tonight.”

The crowd gave Miranda a standing ovation before the show even started, and during the curtain call he wiped away tears and wrapped himself in a large Puerto Rican flag as he briefly addressed the crowd in Spanish and English.

During the show’s intermission, accountant Zoraida Alvira sat absorbed as she read the three-page synopsis since she struggles a bit with English. It was the first time she had seen a musical and was transfixed.

“Here in Puerto Rico we are not too exposed to theater, let alone musicals,” she said as she praised the performance. “I didn’t move, and I’m a fidgety person.”

Alvira, like several other Puerto Ricans who attended opening night, snapped up her ticket thanks to a lottery launched by “Hamilton” organizers who are selling 275 tickets for every performance at $10 each.

Among those expected to attend the show in upcoming days are several federal lawmakers visiting the U.S. territory for the weekend to learn more about reconstruction efforts following Hurricane Maria, which caused more than $100 billion in damage when it hit on Sept. 20, 2017.

Even people who didn’t have tickets showed up at the venue.

“This is a very important moment for Puerto Rico right now,” said Vivian Rodriguez, a student who lives in Puerto Rico but is from New York. She noted that Friday is Hamilton’s birthday, and she said Puerto Rico has suffered from what she described as its “colonial” status.

“Hamilton” was initially going to be staged at the University of Puerto Rico from Jan. 8 to 27, but producers announced in December that it was moving to the Centro de Bellas Artes following the threat of protests by university employees upset over enrollment changes at the island’s largest public university.

The change forced some people on the U.S. mainland to forego their Hamilton tickets because they were unable or could not afford to change their airline tickets to accommodate the show’s new dates. Others were upset when they did not hear back from the agency responsible for reassigning new dates for previously purchased tickets. 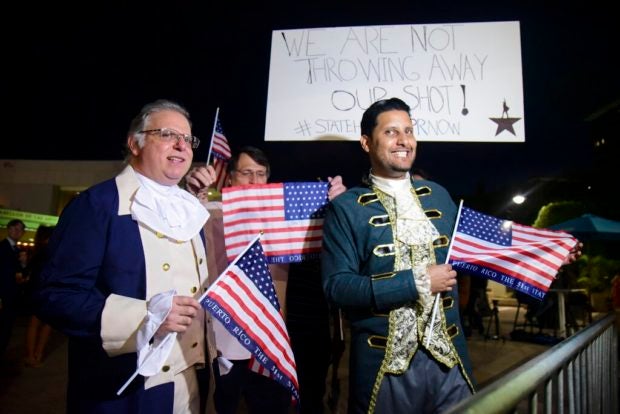 “It has been such a nightmare for me,” said Myla Ruiz, who lives in the northern coastal town of Toa Baja and had gotten tickets for the original opening night.

Her husband is now unable to go because he will be on a work trip, and then she struggled to get a response from the agency selling the tickets. She is now reluctantly attending the show’s last night.

“I’m originally from New York, so I’m a huge fan of Broadway,” she said. “This to me is huge. There’s nothing like Broadway here. When they said this was coming, it’s all I’ve been talking about.”

The show also drew the attention of Jimmy Fallon, whose “Tonight Show” will air its Jan. 15 episode from Puerto Rico with Miranda and the new touring cast.

Miranda, composer and creator of “Hamilton,” won a Tony Award and Pulitzer Prize for the musical. MKH