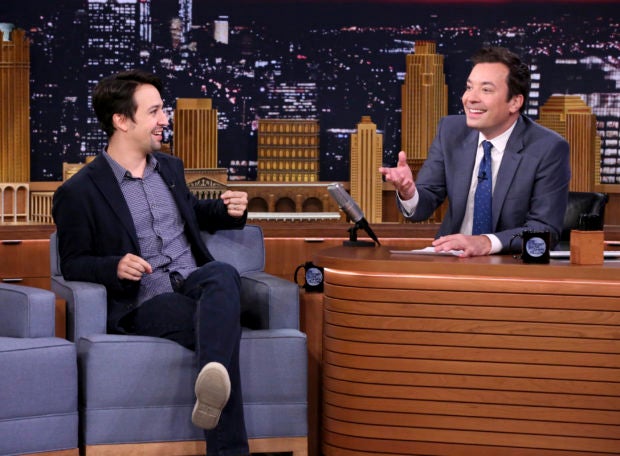 This Oct. 4, 2016 image released by NBC shows Lin-Manuel Miranda during an interview with host Jimmy Fallon on “The Tonight Show Starring Jimmy Fallon”, in New York. Fallon’s “Tonight Show” broadcast from Puerto Rico on Jan. 15, will showcase artists with ties to the U.S. territory. Besides previously announced Miranda, Fallon will be joined on the show by Jose Feliciano, Bad Bunny and Ozuna. Image: NCBU Photo Bank/Andrew Lipovsky via AP

Besides previously announced guest Lin-Manuel Miranda, Fallon said Thursday he will be joined on the Tuesday, Jan. 15, show by Jose Feliciano, Bad Bunny and Ozuna.

The three musicians are natives of Puerto Rico.

The show aims to highlight Puerto Rico’s culture as well as what it still faces after the disaster, including restoration estimated by the government at more than $130 billion.

“A tremendous amount of work has gone into rebuilding these vibrant, beautiful communities, and there is still so much more that needs to be done — and we want to continue to help,” Fallon said.

The New York-born Miranda, who’s performing in his award-winning Broadway musical “Hamilton” starting Friday in San Juan, is of Puerto Rican heritage and regularly visited the territory as a youngster.

In a statement, Miranda said he appreciated that Fallon was “breaking with the traditional late-night mold to celebrate the beauty and culture of Puerto Rico” and help promote tourism.

“My family, along with ‘Hamilton’, are dedicated to continuing to aid in Puerto Rico’s strive for prosperity and we are thankful to be able to call Jimmy and the ‘Tonight Show’ team friends and partners in this mission,” Miranda said.

He and the new “Hamilton” touring cast will perform the musical’s “The Story of Tonight”.

Bad Bunny said viewers will see the island is still recovering but has retained its spirit, adding, “we are happy, we are dancing, playing music, enjoying our amazing food because ‘Estamos Bien'” — or “We’re Fine”, the title of his hit single.

He is set to perform his song “MIA”, while Feliciano and Ozuna will join on the popular tune “En Mi Viejo San Juan” (“In My Old San Juan”).

Andres will discuss the continuing Puerto Rico efforts of World Central Kitchen, the nonprofit he founded that’s working to revive the island’s food economy with grants and training for small farms.

The episode also will include Fallon’s tour of Puerto Rico to highlight what it has to offer, including its “breathtaking beauty” and exciting activities, NBC said. CC

Jimmy Fallon finds out he had chance with Nicole Kidman

Read Next
Aretha Franklin biopic moves ahead with director and writer
EDITORS' PICK
EuroMillions Superdraw: A lottery draw unlike any other is coming to the Philippines
‘Justice will be done,’ Duterte assures as he vowed probe on Jolo incident to bare ‘truth’
Water remains our saving grace right now
Smart releases Hyun Bin’s second TVC
Current dominant strain of COVID-19 more infectious than original—study
DOLE: Return of OFWs’ remains from Saudi to be ‘delayed,’ deadline moved to ‘early next week’
MOST READ
Locsin warns of ‘severest response’ if China’s army drills in SCS ‘spill over’ to PH domain
BREAKING: Duterte signs anti-terror bill into law
Duterte tells military: No other president looked at you the way I did
INQ animated bar graph: How severe is COVID-19 in Southeast Asia
Don't miss out on the latest news and information.