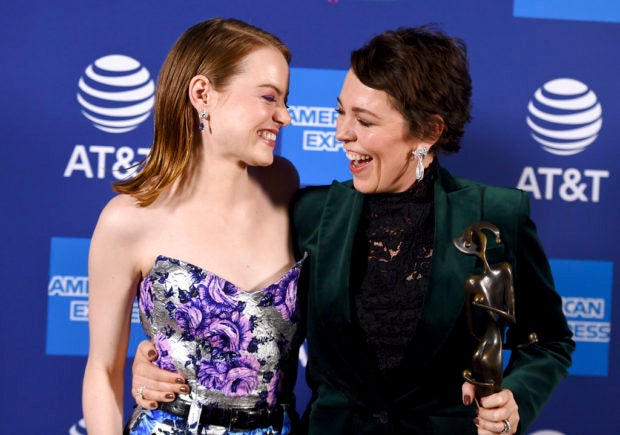 The Palm Springs International Film Festival gala was a familiar setting for Cooper, who received director of the year honors on Thursday. He had presented the same trophy to his “Silver Linings Playbook” director David O. Russell six years ago, and filmed key “A Star is Born” scenes in the area.

First-time director Cooper choked up while thanking co-star Sam Elliott for his “blind faith,” saying, “It’s just a testament that if you believe in something so strong and you’re willing to work tirelessly, you can get great artists like Sam Elliott.”

“Can You Ever Forgive Me?” star Melissa McCarthy and “The Favourite” star Colman both held back tears when talking about their husbands on stage.

Lee, winner of a career achievement award, recounted his early ambitions after being introduced by his “BlackKklansman” stars John David Washington and Adam Driver.

“Growing up in public school in Brooklyn, I would sit in the back of the class,” he said. “I would practice my autograph. Didn’t take any notes. Just practice my autograph. I don’t know why. But I knew one day I would be signing autographs. So this whole thing, as a filmmaker. I think that I didn’t choose film. Film chose me.”

“If what Mary Poppins does for people is come in and infuse a sense of wonder and hope and joy, well then … you are our Manny Poppins, always and forever,” she said.

Colman made one of the night’s few nods to real-world politics. She called Queen Anne, her character in “The Favourite,” ”someone in whom resides all the madness, frustration, confusion and instability of a powerful person unfit for their job. I don’t know if you know of anyone like that.”

“Green Book,” a race-focused story set in the 1950s and inspired by a true story, was given the Vanguard Award at the event. On the red carpet, star Viggo Mortensen pushed back against what he called “extremely unfair” recent media reports questioning the historical accuracy of the film.

Honorees at the black-tie optional gala dinner will be seeing plenty more of each other. All the individual award winners are also nominees at the Golden Globe Awards, to be held Sunday in Beverly Hills. MKH

What to watch out for at this year’s Golden Globes