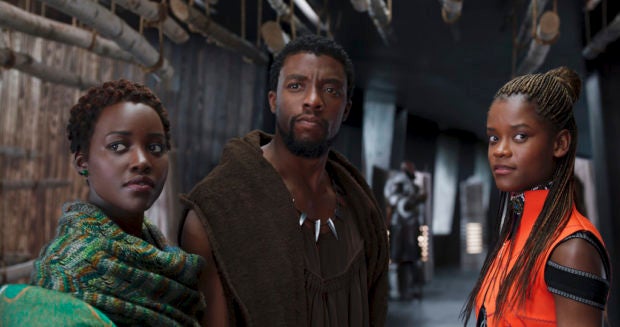 FILE – This file image released by Disney shows Lupita Nyong’o, from left, Chadwick Boseman and Letitia Wright in a scene from “Black Panther.” The producers behind hits “Black Panther,” “Crazy Rich Asians,” “A Star Is Born” and “Bohemian Rhapsody” are among the 10 nominees for the top prize at the Producers Guild Awards announced Friday, Jan. 4, 2019. Image: Disney via AP, File

LOS ANGELES — The producers behind hits “Black Panther,” ”Crazy Rich Asians,” ”A Star Is Born” and “Bohemian Rhapsody” are among the 10 nominees for the top prize at the Producers Guild Awards.

The Producers Guild of America announced its selections Friday for it 30th installment, which also included “BlacKkKlansman,” ”The Favourite,” ”Green Book, “A Quiet Place,” ”Roma” and “Vice.”

Notably absent from the nominees were “First Man” and “If Beale Street Could Talk.”

The winner of the PGA award has often gone on to win the best picture prize at the Oscars as happened last year with “The Shape of Water.” It diverged, however, in the two previous years.

Animated nominees included “Spider-Man: Into the Spider-Verse,” and “Incredibles 2.”

Winners will be unveiled at a ceremony in Beverly Hills on Jan. 19. MKH