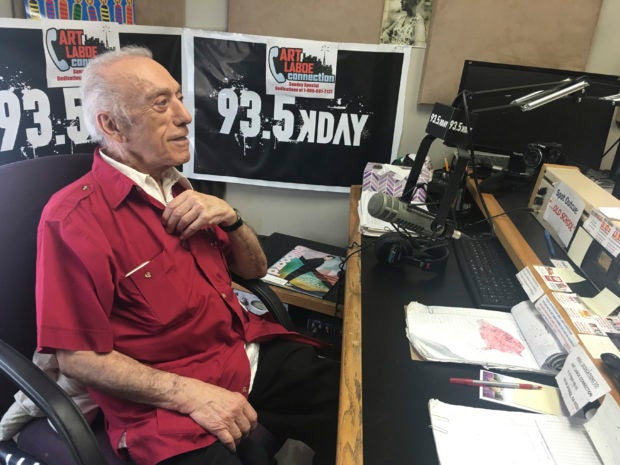 In this Oct. 9, 2018 photo, DJ Art Laboe sits in his Palm Springs, Calif., studio and talks about his 75 years in the radio business. Laboe remains a popular DJ among generations of Mexican American in California, Arizona and New Mexico and has a devoted following among those who every Sunday on his syndicated radio show give dedications to loved ones serving time in prison. Image: AP/Russell Contreras

“And now it’s time for you to call up for those goodnight dedications,” Laboe announces.

“Hello?” a young girl says. “I want to dedicate this to my dad that’s in Lancaster (prison) and I miss tonight … I just want to say, Dad, I love you no matter where you go…” She dissolves into tears.

The 93-year-old DJ based in Palm Springs, California, credits one group of listeners for keeping him on the air after 75 years: family members who want to send messages to loved ones in prison.

Every Sunday on his syndicated show “The Art Laboe Connection Show”, his baritone voice calls on family members to speak directly to inmates in California, Arizona or Nevada. Sometimes, Laboe reads parts of letters written by inmates.

It’s a role Laboe says he feels honored to play.

“I don’t judge,” Laboe said in an interview with The Associated Press at his Palm Springs studio. “I like people.”

He often tells a story about a woman who came by the studio so her toddler could tell her father, who was serving time for a violent crime, “Daddy, I love you.”

“It was the first time he had heard his baby’s voice,” Laboe said. “And this tough, hard-nosed guy burst into tears.”

Born Arthur Egnoian in Salt Lake City to an Armenian-American family, Laboe grew up during the Great Depression in a Mormon household run by a single mom. His sister sent him his first radio when he was 8 years old. The voices and stories that came from it enveloped him.

“And I haven’t let go since,” Laboe said.

He moved to California, attended Stanford University and served in the U.S. Navy during World War II. Eventually, he landed a job as a radio announcer at KSAN in San Francisco and adopted the name Art Laboe after a boss suggested he take the last name of a secretary to sound more American.

But it was when Laboe worked as a DJ for KXLA in Los Angeles where he gained fame. Laboe was one of the first DJs to play R&B and rock ‘n’ roll in California and is credited by scholars for helping integrate dance halls among Latinos, blacks, Asian Americans and whites who were drawn to his multicultural musical line up.

Over the decades, Laboe maintained a fan base, especially among Mexican-Americans who followed him from station to station. He started getting calls from inmates’ family members in the 1990s on his syndicated oldies show. Current and former gang members were some of his most loyal fans.

“Here is someone who gave a voice to the most humble of us all through music,” said Lalo Alcaraz, a syndicated cartoonist and television writer who grew up listening to Laboe in San Diego. “He brought us together. That’s why we sought him out.”

Over the years, the syndicated show on Sunday has aired in California, Nevada, Arizona and New Mexico.

“Without Art Laboe, I’m So Lonely I Could Cry,” wrote essayist Adam Vine. Laboe later returned to the Los Angeles airwaves on another station.

“I see these really tough looking guys in the crowd. I mean, they look scary,” Nogales said. “Then Art comes out and they just melt. They love him.” CC