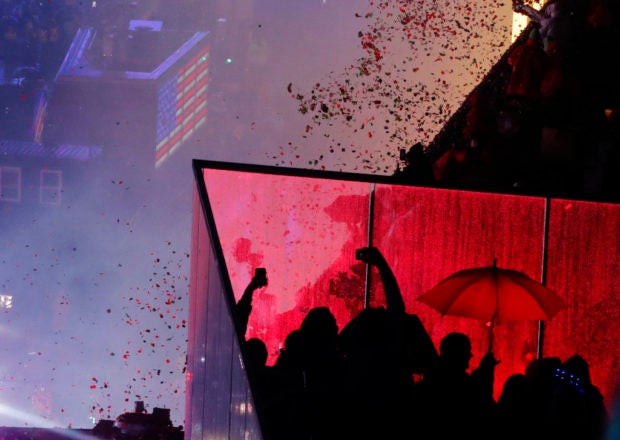 Confetti dropped over the crowd as the clock strikes midnight during the New Year’s celebration in Times Square as seen from the Marriott Marquis in New York, Tuesday, Jan. 1, 2019. Image: AP Photo/Frank Franklin II

NEW YORK (AP) — Broadway producers had plenty of reasons to pop the bubbly as 2018 wound down, with many shows recording their most profitable weeks despite some eye-popping ticket prices.

Eight shows last week earned more than $2 million for the week ending Dec. 30, led by “Hamilton”, ”The Lion King” and “Wicked”, according to the Broadway League, a national trade association for the industry. “Hamilton” crossed the $4 million mark for the week, with an average ticket costing $375.39.

The year ended with the best attended and the highest grossing week on record. Grosses soared to $57.8 million for the week, attracting 378,910 patrons. By way of comparison, the year 2017 ended with grosses at $35.8 million and 244,973 patrons.

New weekly highs were reached by shows including “Mean Girls”, which earned $1.9 million over eight shows, and “The Ferryman”, which pulled in just over $1 million over eight performances. Even the musical “Chicago” got into the act at the mature age of 22, earning $1.2 million.

There was dueling hype for two play properties: The two-part “Harry Potter and the Cursed Child” set a new Broadway record for weekly ticket sales for a play, reporting a gross of over $2.5 million for eight shows. But not far away, “To Kill a Mockingbird” brought in $1.7 million over eight shows, making it the highest single-week grossing American play in Broadway history.

“King Kong” may have been dismissed by critics but the monster ape musical got to boast that Sunday’s matinee grossed $243,090 — the best-selling single performance in the history of the Broadway Theatre.

Those who boasted surpassing the $2 million mark included all three Disney offerings: “Aladdin” broke the New Amsterdam Theatre record by attracting $2.6 million on nine performances, “Frozen” set a new record at the St. James Theatre with $2.3 million over eight shows, and “The Lion King” shattered the Minskoff Theatre record with $3.7 million over nine shows.

Some shows worked very hard for their records. The magic show “The Illusionists — Magic of the Holidays” set a new all-time weekly box office record at the Marquis Theatre of $2.9 million but had to do it with 16 performances.

The time around Christmas and New Year’s is usually Broadway’s boom time, but this holiday season was particularly flush, pushed by premium pricing, relatively warm weather and several shows going from eight performances a week to nine.

Not every show was downing Champagne. The reunion of “American Idol” alums Ruben Studdard and Clay Aiken for a Christmas concert attracted a mere $163,429 over nine shows, just 11 percent of its potential gross. The theater was 27 percent full for the week. KM