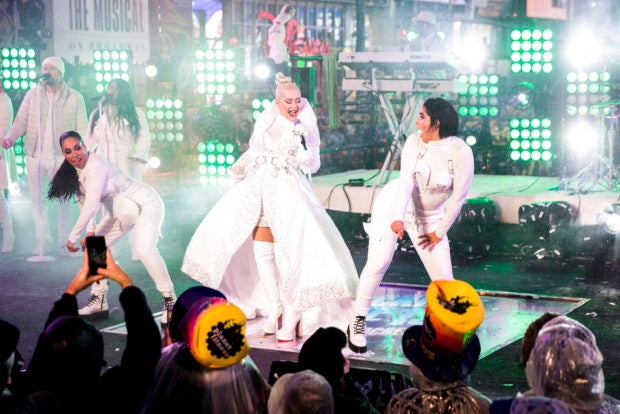 NEW YORK (AP) — Television ratings for New Year’s Eve celebrations took a tumble this year — and you can probably partly blame the weather.

Contrary to what the soggy celebrants in New York’s Times Square might think, it is because of good weather. Last year’s ABC’s “New Year’s Rockin’ Eve” had its biggest audience since at least 1991 with much of the country locked in a deep freeze and potential partygoers wanting to stay home and keep warm.

Nielsen did not immediately have viewership numbers for late-night coverage when the ball dropped at midnight to signify the arrival of 2019. But in a preliminary sampling of the nation’s largest television markets showed similar declines to earlier in the evening. ABC’s late-night coverage was down 27 percent from the previous year, while Fox was down 22 percent, Nielsen said.

Sports dominated an otherwise quiet week in television, with ESPN’s prime-time ratings topping all of the broadcast networks. The college football playoff semifinals were the most popular programs, led by the 18.5 million people who watched Alabama beat Oklahoma.

ESPN’s audience topped all of the broadcast and cable networks, with a 5.73 primetime average. The other top cable networks were Hallmark with 1.95 million, USA with 1.28 million, Fox News Channel with 1.24 million and HGTV with 1.18 million.

ABC’s “World News Tonight” topped the evening newscasts with an average of 8.8 million viewers. NBC’s “Nightly News” had 8 million and the “CBS Evening News” had 6 million.

For the week of Dec. 24-30, the top 10 shows, their networks and viewerships are as follows:

LOOK: Sunshine Cruz, Macky Mathay reaffirm love for each other this New Year