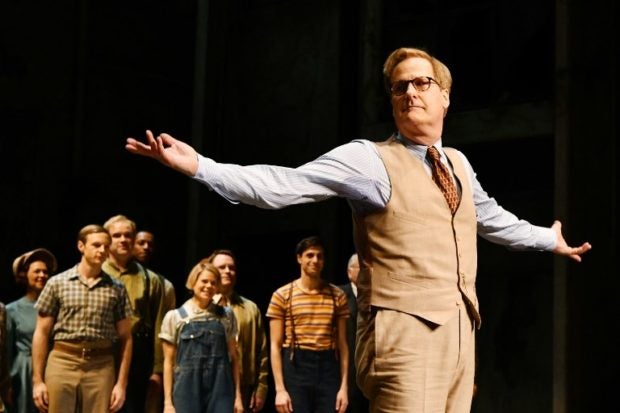 Jeff Daniels takes a bow during the curtain call after the opening night performance of “To Kill A Mocking Bird” at the Shubert Theatre on Dec. 13, 2018 in New York City. Image: Slaven Vlasic/Getty Images for “To Kill A Mockingbird”/AFP

It’s a story of racial injustice that is seared into the United States psyche and required reading for millions of American students.

Now, Harper Lee’s seminal novel “To Kill a Mockingbird” is a Broadway smash hit, after a modern facelift from playwright Aaron Sorkin that has made the literary classic newly relevant in Trump’s America.

“Mockingbird” is a sacred text in the U.S. — a winner of the Pulitzer Prize in 1961 and the inspiration for an Oscar-winning movie.

So why make an international bestseller into a play, and how do you make it fresh?

The answer seems to be to hire Sorkin — the creative mind behind hit television show “The West Wing” and an Oscar winner himself for writing the screenplay for “The Social Network” about the creation of Facebook.

Sorkin has kept the action in the Jim Crow era of racial segregation, but adapted it for a 2018 audience, in an America still confronted by its “original sin” of slavery and with liberals thirsty for hope under Donald Trump’s administration.

In an essay for New York magazine, Sorkin called the task “a suicide mission.”

If the rave reviews since Thursday night’s Broadway premiere are to be believed, Sorkin — who had not written for the stage in more than a decade — has a fresh hit on his hands.

The 1,400-seat Shubert Theatre is already sold out for months into a run expected to end in September 2019, and the buzz surrounding “Mockingbird” is electric.

The play — directed by the award-winning Bartlett Sher — stars Jeff Daniels as Atticus Finch, the widowed small-town lawyer who defends a black man wrongly accused of rape in 1930s Alabama.

“Cases like this happen every day in this country — people are wrongfully accused, particularly if they are of color,” says actor Gbenga Akinnagbe, who is making his Broadway debut as Tom Robinson, the laborer falsely accused of rape by the white daughter of a racist father.

“If my portrayal of Tom can get people to… empathize more with human beings who have been cast aside, I think I would have done something important,” Akinnagbe told AFP.

Sorkin insists that no event in the play doesn’t happen in the book, but the only two significant black characters — the wrongly accused Robinson and maid Calpurnia — have been expanded into more rounded characters.

“It’s the kind of thing that would have gone unnoticed in 1960, but in 2018, using black characters only as atmosphere is as noticeable as it is wrong,” he explained in the New York magazine essay.

It is Finch — not his daughter Scout, who narrates the book — who is the central protagonist and given a flaw necessary for dramaturgical purposes.

“He believes in the fundamental goodness in everyone, even homicidal white supremacists,” Sorkin writes. “This set of beliefs would be challenged.”

While the trial doesn’t begin until chapter 16 in the novel, it comes on stage minutes after the curtain rises.

The children Scout, Jem and Dill are played by adults, as the roles were deemed too complicated for child actors.

The events of the play resonate in the challenges of today’s America.

Recent years have been marked by street protests against police killings of unarmed black men. Hate crimes are up. Trump’s administration has been accused of discrimination. Racial violence has returned to the headlines.

Then there is the #MeToo reckoning with sexual harassment, which the play turns on its head by examining the case of a woman who wrongly accuses a man.

The reclusive Lee gave her approval to Sorkin to write the play shortly before her death in 2016, but her estate sued the production, complaining that the characters had been altered and arguing that the play had departed from the “spirit” of the novel.

A settlement was ultimately reached — with Sorkin agreeing to soften Finch’s language, deny him a celebratory whiskey and delete a reference to a rifle in the closet — in exchange for leaving the expanded black roles intact.

Sorkin also opted to bypass “Go Set A Watchman” — Lee’s controversial early draft of “Mockingbird” that was published in 2015 — in writing the play.

“It’s not an homage or an exercise in nostalgia,” he wrote in New York magazine. “It’s a new play.”

Frederick Weller — who plays Bob Ewell, the racist father of the accuser — was effusive about working with Sorkin.

“His words are magic — it’s like having jewels in your mouth,” Weller told AFP, summing up his role as “the most despicable character I’ve ever played.”

“The play ultimately is very hopeful and it will alleviate some of the cynicism and the frustration that can set in,” he said. MKH