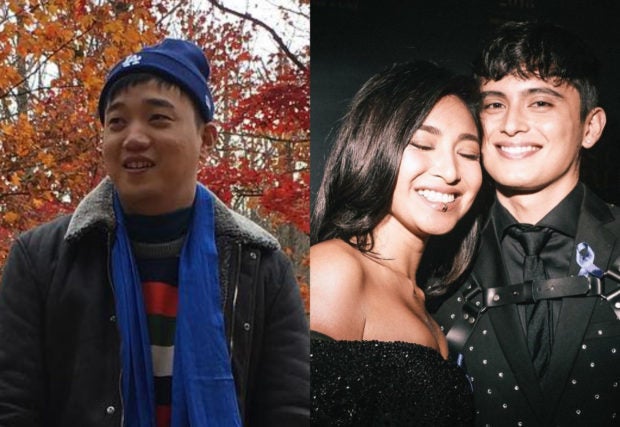 This 2019, Korean comedian and TV personality Ryan Bang predicts that actor and singer James Reid will finally go down on one knee to propose to his girlfriend Nadine Lustre.

Bang went unfiltered in his New Year predictions for Kapamilya celebrities on “Tonight with Boy Abunda” last Monday, Dec. 31. From Anne Curtis giving birth to a bouncing baby boy, to what will happen to Vice Ganda and PBA player Calvin Abueva, the Bang shared his 2019 forecast with enthusiasm.

Bang’s first set of predictions involve a couple of pictures that will go viral. For ex-lovers Carlo Aquino and Angelica Panganiban, for example, Bang said a photo of the two bathing together at a sauna in Finland will circulate social media.

He also claimed that another photograph will make its rounds on social media, one showing Reid’s wedding proposal to Lustre.

(James Reid goes down on one knee to propose to Nadine at a mountain in Australia. This is just a prediction, right?)

Bang said Sandara Park will be buying a condominium unit in Manila. As for an issue that the boy group Hashtags will face this year, it will involve two of its members fighting over a female celebrity.

Apparently, 2019 is also the time for celebrities to have babies, according to Bang. He said Vhong Navarro’s “wife” will give birth to a baby girl at St. Luke’s Hospital. It was not made clear whether the said wife is Navarro’s long-time girlfriend, screenwriter Tanya Winona Bautista.

(I can see Anne at St. Luke’s as well. She is holding her baby boy.)

(Next year, celebrities and basketball players will hear rumors that Calvin is the one chasing Vice. But as for Vice, it will be like he does not want it anymore.)

Bang also said Vice will change his hair color this 2019. He said he can see that Vice’s hair will be longer this year.

(So that I can get at least one prediction correct. These are just predictions.)  Kate Matriano/JB