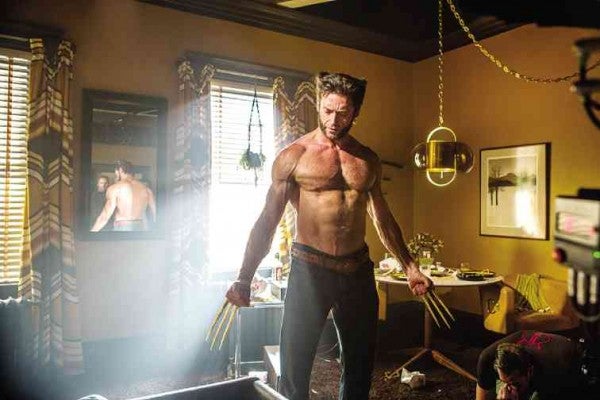 Hugh Jackman, in this undated photo taken during the filming of “X-Men: Days of Future Past,” was incredibly fit but he claims another costar stays longer in the gym. Image: INQUIRER.net FILE PHOTO

Merging various fictional realms can be a dream come true for superhero fans. Which is why when a Google search revealed that Hugh Jackman’s filmography includes the upcoming “Avengers: Endgame”, fans were beyond ecstatic.

Typing “famous Hugh Jackman movies” on Google search has been yielding that the actor is part of the fourth “Avengers” movie, as per the tip received by entertainment website FandomWire on Dec. 27. Jackman played the role of superhero Wolverine for 17 years, ending his almost two-decade portrayal with the 2017 film “Logan”.

Disney, which acquired Marvel Entertainment, and Jackman have yet to confirm or deny the actor’s appearance in the film which is slated for release on April 26, 2019.

Fans immediately tried the said phrase in their searches and discovered for themselves that the upcoming film was indeed in the list of Jackman’s movies. They immediately took to Twitter to share their search results.

Some fans wish for Jackman to play his iconic role should he really appear in the 2019 film. However, Disney has yet to complete its acquisition of 21st Century Fox, which owns the “X-Men” characters, the report said.

Meanwhile, other fans believed that his appearance in the “Avengers” movie is a hoax. They found out that Jackman’s films were transferred to the television section of his Wikipedia page.

The now-deleted entry for “Avengers: Endgame” showed Jackman will play another superhero, Deadpool. Because of this, some fans concluded that his upcoming appearance is nothing but a rumor caused by someone tampering with the actor’s Wikipedia page.

All of Hugh Jackman's film roles have been moved to "Television" on his Wikipedia page. Which leads me to believe that someone's fucking with his Wiki to get Marvel fans to lose their minds.

Jackman previously denied rumors of his as return as Wolverine in the “Avengers” franchise in 2017. His change of heart came months after saying he will resume the role if he could team up with the “Earth’s mightiest superheroes.” Kate Matriano/JB

Hugh Jackman to resume Wolverine role if added to the Avengers