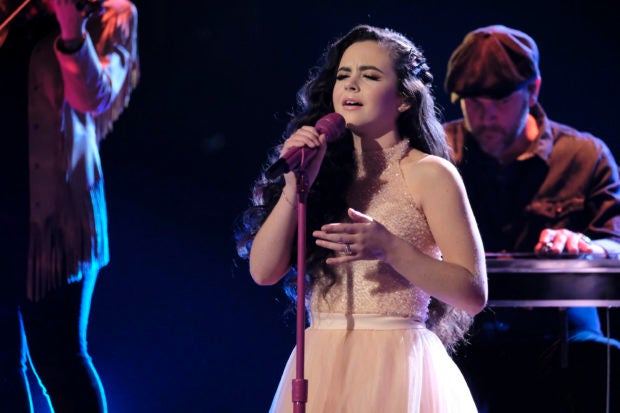 This Monday, Dec. 17, 2018 photo provided by NBC shows “The Voice” finalist, Chevel Shepherd, for season 15 in Universal City, Calif. Shepherd, who is 16, was declared the winner of “The Voice” on Tuesday after weeks of competition. Image: NBC/Trae Patton via AP

LOS ANGELES (AP) — The 16-year-old charmer who conquered “The Voice” with her old-school country touch helped boost NBC to a weekly ratings win.

Football once again proved its ratings dominance, with broadcast and cable games and pre- or post-game shows claiming six of the week’s top 10 spots, according to Nielsen figures released Thursday.

The top-ranked game — and program overall — was NBC’s Sunday night NFL showcase, in which the Seattle Seahawks clinched a spot in the NFC playoffs with a 38-31 win over the Kansas City Chiefs.

NBC won the week in prime time, averaging 6.7 million. CBS, aided by “60 Minutes” and top 20 reruns of stalwart series including “NCIS” and “The Big Bang Theory”, followed with 6.4 million.

Prime-time TV viewing typically drops during the holidays for broadcast networks, but Fox was particularly hard hit as it marked its first week this fall without Thursday Night Football. For the week of Dec. 10, when the network’s L.A. Chargers-Kansas City telecast ranked second among all programs, the network averaged 5.1 million total viewers.

ESPN was the week’s most popular cable network, averaging 2.8 million people in prime time. Holiday-spirited Hallmark had 2 million, MSNBC had 1.9 million, Fox News Channel had 1.87 million and CNN had 1.1 million.

ABC’s “World News Tonight” topped the evening newscasts with an average of 8.7 million viewers. NBC’s “Nightly News” was second with 8.4 million and the “CBS Evening News” had 6.2 million.

Filipino-American singer blows ‘The Voice’ judges away during blind auditions

Arnel Pineda doesn’t believe he’s ‘voice’ of Journey, prefers to be ‘messenger’ than ‘a legacy’

Repatriation of Filipinos in cruise ship sought after quarantine period