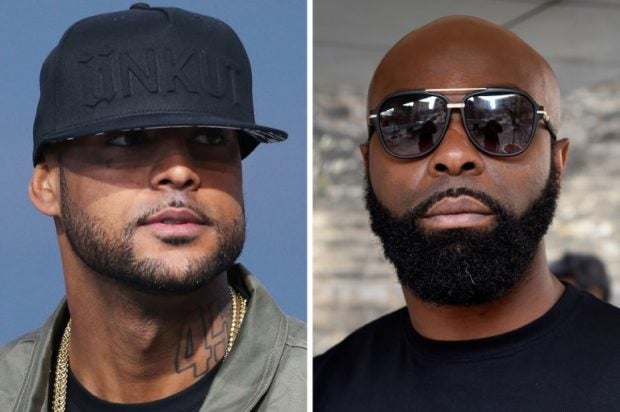 Two feuding French rappers have sparked hilarity on social media by vowing to settle their differences in the ring with a no-rules cage fight.

Bitter rivals Booba and Kaaris ended up behind bars in August after a running battle between their entourages shut down part of a Paris airport. Yet a month in solitary confinement, heavy fines and the threat of 18 more months behind bars has done nothing to cool their animosity.

After an exchange of blood-curdling Christmas greetings on social media, the pair say they will “bury the hatchet” in a no-rules cage fight in the New Year. Hostilities flared again between the rivals on Christmas Day, when traditionally goodwill is supposed to reign between all men.

Kaaris, 38, was first to break the truce by challenging his rival to “come and get me. You know where to find me”.

Booba, known as the “Duke of Boulogne”, rose immediately to the bait, posting a video of himself on Instagram stripped to the waist to reveal his muscled and tattooed torso: “I am waiting for the day, for the hour, brother. No referee, just an octagon (cage of the type used in ultra-violent MMA, mixed martial arts, bouts).

“I will (expletive) beat you to death, you son of a bitch,” he declared.

‘No referee. No rules’

With Ivory Coast-born Kaaris previously saying that he was going to drink his rival’s blood, Booba — aka Elie Yaffa — attempted to lay down the ground rules for the rumble. “I am ready to take it to a Thai or normal boxing contest over 10 rounds,” he wrote.

“I am sure it would be a cakewalk to fill Bercy,” he added, referring to the Paris stadium which is often used for rock concerts.

Kaaris accepted the challenge, insisting on the MMA octagon “without referee or rules” and demanded they fight this weekend. “I will break your bones,” he snarled before Booba countered with a photo of himself stripped and ready in the ring with his posse alongside French football’s bad boy star, Karim Benzema.

“I accept (your challenge),” he added, “Now we are all waiting for the time and date… I’m still frustrated from you running away at Orly,” he jabbed, referring to the ruck between their crews in the duty-free shop of the airport in August.

The scrap between the singers, who were both on their way to concerts in Barcelona, went viral after bystanders filmed the fight on their phones. The exchange of insults set social media alight, with mocking memes comparing the grudge match to the big money boxing match between boxing legend Floyd Mayweather and Irish MMA star Conor McGregor in 2017, that the American won.

It further heated up Wednesday with Kaaris claiming that Booba — who is in Florida — wanted to put off the showdown until April.

“Get the plane and come and fight me in private without the cops and your bodyguards on December 30. In April we can do it in an arena and in June in the French national stadium and that way I can hammer you three times,” he boasted on Instagram.

The two rappers have waged a feud over social media for years. Airport bosses said the August brawl “endangered the lives of others” and lodged a public order complaint against the singers after the ruckus forced officials to temporarily shut down the departures hall.

Prosecutors later said that Booba, 42, had kicked Kaaris after his rival has squared up to him, before their entourages piled in. Both were fined and given 18-month suspended prison sentences in October, which Kaaris is appealing. KM