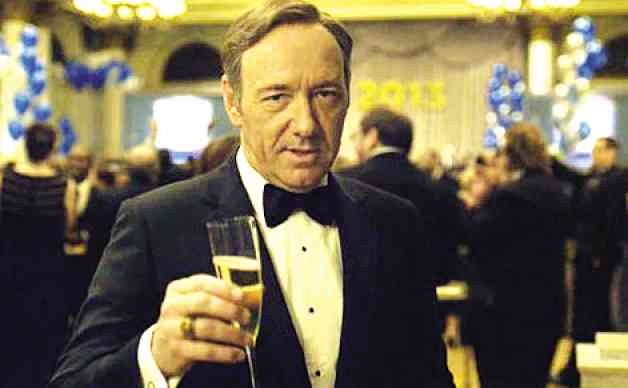 Kevin Spacey in “House of Cards”

NEW YORK, United States – A young man who accused Kevin Spacey of sexually assaulting him at a seaside restaurant near Boston in 2016 filmed part of the incident, according to court filings obtained by AFP.

The 59-year-old star of the “House of Cards” series, who has won two Oscars, is due to be formally charged on January 7 on the island of Nantucket with “indecent assault and battery on a person over 14 years of age.”

If found guilty, Spacey could face up to five years in jail.

The young man, identified as William Little and aged 18 at the time of the alleged assault in July 2016, told police he had sent messages, including a video, to his girlfriend via the Snapchat app from the “Club Car” restaurant in Nantucket, where he was working as a bus boy for the summer, according to the court filing.

He had remained in the bar after his shift had finished to see Spacey, of whom he was a fan.

After meeting the actor and telling him he was 23 years old — the legal drinking age is 21 in Massachusetts — he started drinking first beer and then whiskey with Spacey.

Spacey then allegedly invited him back to his place, along with some other friends. The young man declined, suspecting the actor was trying to seduce him. But he stayed in the bar in the hopes of getting a picture with Spacey.

“Will only lingered around because he wanted a picture with Spacey, something for Instagram,” the filing said. “Spacey had told him, if you come back with me, I will take a picture with you.”

That was when Spacey began sexually molesting the young man, the filed charges said.

“Will tried to shift away with his body and move Spacey’s hands away with his hands but Spacey kept reaching down his pants,” it said.

“Will said his girlfriend did not believe him so that’s when he Snapchatted the video,” it said.

He then left the bar on the advice of a woman who reportedly saw “he was in distress.” He returned to work the next day and informed the owner of the bar of the incident, the court documents said.

The filing said that police had retrieved the footage and shown it to the young man, who confirmed it showed him and Spacey.

Spacey, who was forced out of public life by accusations of sexual misconduct in 2017, has not yet commented on the latest charges.

But this week he posted a video online of himself speaking about allegations of sexual abuse in the character of Frank Underwood, the scheming politician he played in House of Cards before the show dropped him.

Spacey’s lawyer did not respond immediately to an AFP request for comment.

Spacey was considered one of the finest actors of his generation but his career nosedived following allegations of sexual misconduct by more than a dozen men in the United States and Britain.

The first public report of alleged abuse by him came from actor Anthony Rapp, who claimed that Spacey sexually abused him when Rapp was 14, in 1986. /cbb

Read Next
Lindsay Lohan’s stepmom accused of trying to commandeer bus
EDITORS' PICK
WHO: Indoor airborne spread of coronavirus possible
Water remains our saving grace right now
Motostrada expands by handing over ‘Trident’ and adding new ‘Horseman’ to its growing business
No arrests to be made on 1st day of allowed pillion riding for couples — HPG
House panel set to meet for possible decision on ABS-CBN franchise bid
Digital hunt for Hyun Bin: 5 challenges for Smartees
MOST READ
‘I will always speak up for you’: Server on defending Fil-Am family from racist rant
‘Nouveau’: Agot Isidro hits Jinkee Pacquaio’s show of luxury Hermes, Louis Vuitton bikes
Bela Padilla on being tagged a Diehard Duterte Supporter: ‘Nope, not at all’
Solon withdraws support for ABS-CBN franchise renewal
Don't miss out on the latest news and information.