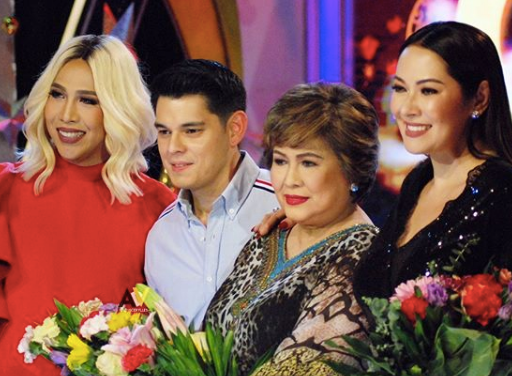 Ruffa Gutierrez and Annabelle Rama may have had a handful of public squabbles in the past, especially whenever Ruffa’s romantic life is concerned, but their appreciation and love remain for each other.

The unfiltered Rama did not hold back when she shared on “Gandang Gabi Vice” last Dec. 23 that when it comes to her children, Ruffa is the one who always gets an earful from her.

(You know, until now, I won’t mention my age anymore, but until now she still meddles with my love life. It’s crazy.)

There is a reason, however, why Rama does such, maintaining that she only wants to ensure that her daughter would be okay after she is gone.

(Of course, I just want your life to be in order even when I’m gone. I’m just telling the truth, Ruffa, I’m too worried about what will happen to your life when I’m gone, right?)

Meanwhile, at one point during the interview, brother Richard shared to Vice Ganda that Ruffa spoiled them a lot while growing up.

(Of course at that time, while you were all still young, Ruffa was already earning.)

Rama also agreed with Richard, saying how Ruffa helped their family a lot in the past. She remembered, for one, how many blessings came their way after Ruffa’s stint in Miss World 1993, where she placed 2nd runner-up.

(Actually, Ruffa helped our family a lot. She was so famous back then. After Miss World, we really received so many blessings from above. All of us had a taste of the good life because of her.)

(We spent the New Year in Florida, our entire family, and she paid for all of it.)

The Gutierrez trio guested on GGV recently in line with “Fantastica”, Richard’s film with Vice Ganda. Apart from Richard, the likes of Jaclyn Jose, Dingdong Dantes, Maymay Entrata, Edward Barber, Loisa Andalio and Ronnie Alonte, among others, are also with them in the project. “Fantastica” is part of the 44th Metro Manila Film Festival’s lineup and will show in theaters from Dec. 25 to Jan. 7, 2019. JB