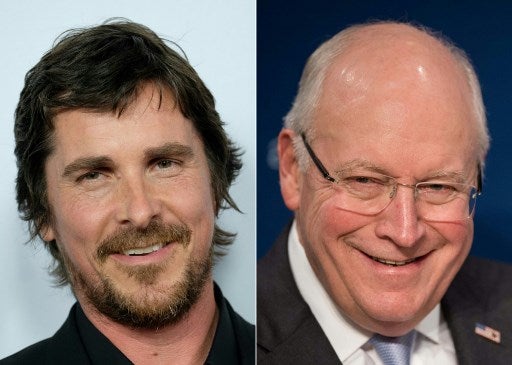 It was almost by accident that director Adam McKay decided to do “Vice” — a biopic about Dick Cheney, the cunning neo-con politician who was George W. Bush’s powerful vice president, that is already earning major awards buzz.

McKay was sick with the flu, picked up a book about Cheney and could not put it down.

“I kept being astounded by how much this guy really changed the course of America,” McKay said at the recent premiere of his movie, which hits United States theaters on Christmas Day.

“Vice” has already scooped up six Golden Globe nominations, leading the competition, and could see Christian Bale, who is unrecognizable under layers of makeup and an extra 40 pounds (about 18 kilos), take home a second Oscar.

Film critics say the Welsh actor — who took home his first Oscar in 2011 for “The Fighter” — crushed it.

Bale “embraces Cheney with sincerity,” said Rolling Stone magazine, while Variety hails his portrayal of Cheney as being on “a virtuoso level of observation and exactitude.”

“Christian Bale nails the Dick Cheney persona — dry, pointed, deceptively dull, invisibly passive-aggressive, a blank with a hint of a growl — and does it with a playful bravura that could hardly be more perfect,” said Variety.

Bale calls Cheney, who is widely seen as Bush’s eminence grise from 2001 to 2009, “a very strong character — he was incredibly consequential, and he understood brilliantly in a way, like perhaps nobody else, how to work the machinery of government.”

Cheney— who also served as defense secretary from 1989 to 1993 under George H.W. Bush during the first Gulf War — faced tough scrutiny. He was criticized not only for his neo-con policy views, but for his inaccurate claims that Iraq under Saddam Hussein had weapons of mass destruction and his defense of the use of “enhanced interrogation techniques” — now widely seen as torture.

Cheney was also suspected of conflicts of interest: as Bush’s running mate in 2000, he was also CEO of Halliburton, the world’s second-largest oilfield services company. It made a fortune from the second Gulf War in 2003.

“Vice” looks at a variety of chapters of Cheney’s life, from his back and forth between White House duty and business dealings and his past as a rowdy, hard-drinking young man in Wyoming who would eventually get kicked out of Yale.

He owes his health to wife Lynne, played by Amy Adams in a performance that has also earned critical praise. Sam Rockwell (George W. Bush) and Steve Carell (Donald Rumsfeld) round out the cast.

While critics are nearly united on Bale’s performance, opinions on the film as a whole are more divided.  Many critics hailed the work of McKay but others said his depiction of Cheney was superficial.

The movie, said Time magazine, turns Cheney into “a cartoon villain.” Variety complained that McKay never addressed the basic question of who Cheney is and how he was able to amass so much power.

“The audience, in trying to suss out his motivation, let alone (gulp!) his inner life, is forced to fall back on abstractions like ‘greed’ and ‘power’,” Variety wrote.

McKay insisted that from the outset, his idea was to “humanize these people — let’s go deep into them, let’s understand them.”

Another thing that might unsettle some viewers are the tricks the movie employs: flashback after flashback, off-screen narration, surreal appearances in the middle of the movie and Cheney himself even breaking the fourth wall to address filmgoers.

Bale says McKay’s unorthodox techniques are vital. “You actually kind of need it because it can be so sad and traumatic, what you are watching,” said Bale.

Carell said one of the strong points of the movie is relevant to today’s politics.

“When people see the film, they’ll obviously make connections between then and now, and that’s the nature of history in general: you can connect the dots (with) things that are happening currently,” Carell said, without mentioning Donald Trump. KM

Read Next
Queen guitarist Brian May releases tribute to NASA spacecraft
EDITORS' PICK
Water remains our saving grace right now
The biggest lottery jackpot in the world is $158 million, and even someone from the Philippines could win it
Smart 5G goes live
COVID-19 cases in PH overshoot 122,000 mark
51% of Filipinos think it’s dangerous to publish anything critical about Duterte admin — SWS
PhilHealth mess: Whose heads will roll? Roque says he can’t wait to name names
MOST READ
Captain astonished that his ship delivered Beirut explosive
‘Vexed’: Guanzon raps Topacio over Alzheimer’s remark
Locsin to China: Don’t overinterpret
COVID-19 cases in PH overshoot 122,000 mark
Don't miss out on the latest news and information.