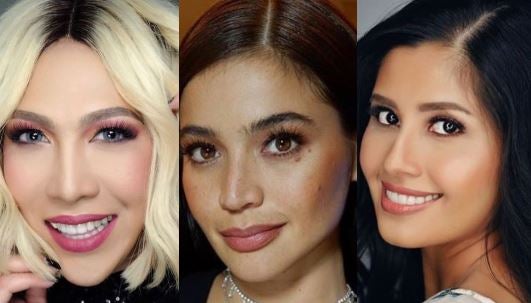 Some celebrities have also tried their hand at Gray’s walk, such as Kapamilya stars Anne Curtis and Vice Ganda, as well as Miss Universe 2011 third runner-up Shamcey Supsup who is known for her signature “tsunami” walk.

Curtis and Vice Ganda attempted to do Gray’s lava walk and slo-mo turn on “It’s Showtime” last Dec. 17, much to the delight of their co-hosts and audience.

(It’s a given that she is so beautiful. But I think what made her win was her pure heart and her answer in the competition, it’s so beautiful.)

(And her walk, her walk was unique.)

(You know, I and Anne tried to achieve that walk, but we just can’t.)

Curtis then walked down the stage to imitate Gray’s lava walk as their co-hosts watched on. Vice Ganda followed suit, where he tried to do the slo-mo turn that Gray effortlessly demonstrated.

Curtis said, “Eto lang ‘yun, she came prepared and she was destined to win.”

(This is all there is to it: she came prepared and was destined to win.)

Supsup, too, tried her hand at Gray’s lava walk and slo-mo turn, which she shared to her fans last Dec. 17 on Instagram.

“Trying my best to do the lava walk in support of our queen @catriona_gray,” Supsup wrote. “All the best Pilipinas!!!”

Trying my best to do the lava walk in support of our queen @catriona_gray All the best Pilipinas!!! #missuniverse2018

Many Filipino beauty queens in the past have come up with their own signature walks. Back in 2010, Miss Universe 2010 fourth runner-up Venus Raj emerged with her “pilapil” walk, inspired by her balancing act of crossing the rice paddies in Camarines Sur when she was a young girl.