Roger Ailes film puts focus on Fox after he left 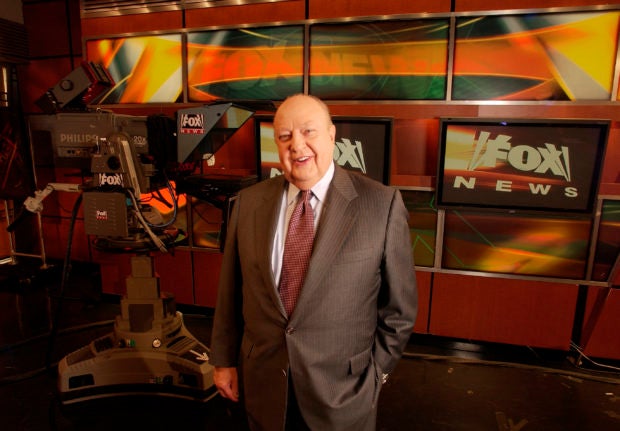 In this Sept. 29, 2006 file photo, Fox News CEO Roger Ailes poses at Fox News in New York. A new documentary, “Divide and Conquer: The Story of Roger Ailes”, directed by Alexis Bloom, deconstructs the rise and fall of the late head of Fox News Channel. The film opens in theaters on Dec. 6, as well as VOD, Apple iTunes, and Amazon streaming services. Image: AP/Jim Cooper

NEW YORK (AP) — More than two years after a sexual misconduct scandal forced Roger Ailes out at Fox News Channel, and a year after his death, his ghost walks the halls of the network he built and ran for two decades.

Friday’s theatrical release of the documentary, “Divide and Conquer: The Story of Roger Ailes”, puts his life story in the public eye again. Two other Ailes projects, a feature film from director Jay Roach and a Showtime miniseries, are also in the works.

At a key moment in Alexis Bloom’s documentary, former Fox and current CNN anchor Alisyn Camerota notes that Ailes “casts such a long shadow that his vision can actually go on without him.”

To a large extent, it has. Fox is a thriving business, and more often than not is the most-watched network in cable television, despite turning over two-thirds of its prime-time lineup. Tucker Carlson and Laura Ingraham replaced Bill O’Reilly and Megyn Kelly with no momentum lost.

“He always said ‘do not lose the audience,'” Bloom said. “He was obsessed with the audience and watched the ratings in 15-minute increments. Fox has not lost the audience. They’ve done very well, and Roger would have been delighted.”

With Ailes, who was in charge was never a question. He decided who was on the air and what was talked about, even what people wore on set. An executive culture grew of people who carried out his orders. While he didn’t discourage creativity or big personalities, “you had to exist within the framework that Roger laid out,” Joe Muto, a former Fox producer who lost his job for spilling insider secrets online, said in an interview.

When Ailes was ousted in July 2016, accused by anchor Gretchen Carlson of forcing her out when he spurned her sexual advances, his successor did not come from the outside. Suzanne Scott, who was appointed chief executive officer of Fox News in May, and Jay Wallace, who is president and executive editor, were both on Ailes’ team.

“They’re making decisions according to Roger’s edicts,” Bloom said. “Roger was very explicit about what was acceptable and what wasn’t, and what he wanted and what he didn’t. It’s something like the 10 Commandments of Roger and to a certain extent, I think they faithfully re-enact that.”

Fox did not making its executives available to speak to The Associated Press, and says Bloom had no access to the network other than former employees.

Scott has not given an interview since ascending to CEO. But Fox points to important culture changes not always evident to outsiders since she took over. The run of sexual misconduct cases has stopped. Besides being the first woman to run a cable news channel, Scott has appointed women as general counsel, chief financial officer, advertising sales president and to a handful of programming leadership positions.

Fox also notes its investment in the newsroom under Scott, including its beefing up its digital resources, and increased communication between the leadership and its employees.

Among the few times Scott’s name has appeared in stories is when she reportedly told producers they needed to take more control over what appeared on their shows, following a stream of embarrassing episodes.

A contributor was suspended for telling a black colleague he was out of his “cotton-picking mind.” Ingraham took heat for mocking a school shooting survivor and likening facilities where immigrant children were separated from their families to summer camp. Fox apologized after a former general called former prisoner of war John McCain “songbird John.” The network showed a photo of NFL players kneeling in prayer and said they were protesting. A guest compared Hillary Clinton to herpes.

Fox’s biggest star, Sean Hannity, appeared alongside colleague Jeanine Pirro onstage at a pre-election rally held by President Donald Trump, pointing to a group of reporters — including one from Fox — and calling them “fake news” (He later said he wasn’t including Fox in the bunch).

While Fox publicly disapproved of Hannity’s rally appearance, there were no other apparent consequences. A decade ago, when it was revealed the Tea Party wanted to use Hannity’s scheduled appearance at one of its rallies to raise money, Ailes ordered him home.

“Roger didn’t like it when somebody got too big for their britches,” Camerota said in an interview.

Fox’s increased emphasis on opinion was apparent when Ailes left. Yet it seems like a distant memory that Hannity had a liberal co-host in his show’s early days. Camerota said she’d frequently argue with Ailes that it made better television to present different points of view.

“I think what he found out is the audience really liked having the conservative viewpoint,” she said. “They liked having some of their own feelings being reinforced and at that point, you can dispense with both sides.”

Fox isn’t alone; MSNBC is a financial success with anchors critical of Trump. Yet the extent to which Fox News has aligned itself with Trump has dug deeply into its reputation. Ailes’ former top deputy, Bill Shine, is now the White House communications director. It was embarrassing for Fox last week when it was revealed that producers on “Fox & Friends” had worked together with an aide to former Trump environmental chief Scott Pruitt to craft a favorable interview segment.

Respected journalists like Chris Wallace, Bret Baeir and John Roberts still work for Fox, and daytime host Shepard Smith makes it a point to counter theories that get traction elsewhere on the network, yet to some, the always delicate balance between news and opinion has tipped.

“You can argue that it was always there and it was implicit,” said Jane Hall, a communications professor at American University. “Now it’s a lot more explicit.”

(Fox, for its part, insists that while its prime-time hosts may lean conservative, it’s not reflective of the entire network).

Many see the Fox that Ailes built as creating the atmosphere for Trump’s success. Trump’s once-weekly call-ins to “Fox & Friends” helped him make the transition from celebrity to political figure. As president, Trump will give an interview to Fox far more than other news outlets.

Ailes was gone from Fox before Trump took office. Bloom said she could see where things may not always have gone smoothly between Ailes and Trump, given the egos involved.

“Roger would have personally been quite annoyed by Trump and would have had a tussle with him publicly,” she said. “He certainly wouldn’t have steered the ship left. Trump wasn’t his first choice, but he would have been onboard. I wonder if he would have been able to maintain a tiny bit more of a fig leaf in terms of news credibility.”

What Bloom hopes for the most is that “Divide and Conquer” gives people outside of the media bubble a sense of where their favorite network came from.

“We lived in his world,” she said. “The America that we’re in is a world that in some profound way Roger had created and we weren’t acknowledging it.” CC

CNN looks for a substitute when news can’t deliver

A CBS network shaped by Moonves is challenged without him

Read Next
Kendrick Lamar, Cooper and Lady Gaga earn Golden Globe nods
EDITORS' PICK
Timeless Elegance in the Philippines’ Most Distinguished Home Kitchens
SM continues to send relief assistance to remote towns in Batangas
Group slams Duterte: Terminate VFA because of sovereignty issues, not because of Bato
Singapore confirms first case of novel coronavirus
Bato on ending VFA with US: ‘I don’t deserve this bargain but it’s not all about me’
Beyond water service: Maynilad builds massive infrastructure projects to clean up Metro Manila waterways
MOST READ
Duterte threatens to scrap VFA if US doesn’t rectify Bato’s visa cancellation
Part of Aurora Boulevard in Cubao closed from Jan. 25 – Feb. 1
Lacson on Duterte’s threat to end VFA over Bato’s canceled visa: Where is the connection?
Corruption worsens: PH falls 14 notches to 113th spot in global index 2019
Don't miss out on the latest news and information.