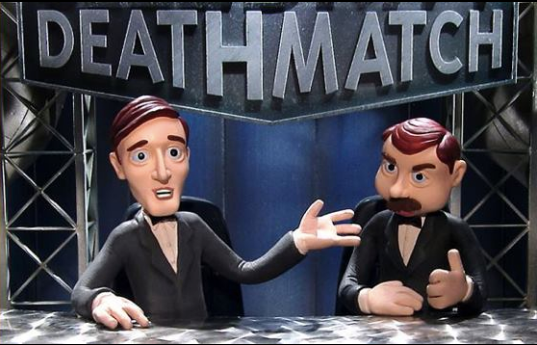 Remember when your favorite celebrities — in clay form — used to battle it out to death on “Celebrity Deathmatch”? MTV announced it will be revived.

The popular claymation series will soon make its way back on television, with rapper Ice Cube to star and serve as executive producer, reports Variety on Wednesday, Dec. 5.

Aside from the rapper, series creator Eric Fogel will return as executive producer. Jeff Kwatinetz and Ben Hurwitz of production company Cube Vision will also be producers for the upcoming show.

“We’re excited to grow our partnership with Ice Cube and Cube Vision to reimagine this fan favorite,” MTV president Chris McCarthy said. “’Deathmatch’ was the meme before memes, remains a hot topic on social media and will be a smart, funny way to tackle the over-the-top rhetoric of today’s pop culture where it belongs – in the wrestling ring.”

“Happy to once again be working with Viacom and MTV on a fan favorite like ‘Celebrity Deathmatch’ and to continue our success together,” Ice Cube said in the report.

“Celebrity Death Match” originally aired on MTV from 1998 to 2002, where it featured parodies of various celebrities engaging in no-holds-barred fights to their claymation death. MTV2 then had a relaunch of the show from 2006 to 2007, airing two seasons.

Meanwhile, the planned revival of the show is projected to be a weekly series. Katrina Hallare/JB

TV shows we ‘hate’ to watch