TV shows we ‘hate’ to watch 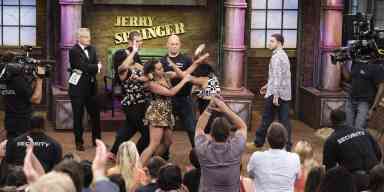 Competition for viewers’ attention on TV has become so intense that some producers have come up with shows that “force” us to watch them due to their “shock” value or quotient.

A “pioneering” example is “The Jerry Springer Show,” which looked for the sleaziest people engaged in the most bizarre activities and relationships—like the guy who got married to his favorite horse (maybe he liked being nagged?)!

Fighting and feuding couples were invited to the TV studio, where they were primed to get into all-out scream and slugfests, as viewers gawked, slack-jawed.

It was all nastily reprehensible, but people kept viewing, transfixed, like they were watching a horrible car crash happening in front of their eyes, in “delicious” slow motion.

Another old show that made for compelling viewing was “Jersey Shore,” with its “reality” cast of down-and-outs, who shocked viewers with their loud and livid behavior, and their “truck driver” vocabulary of excremental expletives!

Interestingly, its loudest and lewdest “star,” Snooki, later managed to rehabilitate her TV image, and with the help of amazingly gifted stylists, moved up in the TV world and became a wealthy entrepreneur.

Of more current vintage is “Keeping Up with the Kardashians,” which is viewed even by people who profess to scorn and dismissively diss its resident clan of “beautiful but boring” reality TV stars.

They too have become awesomely wealthy, famous and influential, each with millions of followers on social media.

“Rich Kids of Beverly Hills” is also calibrated to turn viewers off—even as they keep watching, for fear of missing any of the rich and bitchy youths’ latest excesses.

The indolent and pampered billionaires’ scions fly all over the world spending their folks’ millions like money was going out of style, and shock viewers even more with their self-absorbed and insensitive comments and pronouncements.

“The Real Housewives” set in different enclaves of the rich and bitchy all over the United States, has become a “hated” but addictive viewing habit because its middle-aged denizens have a penchant for getting into big cat fights that scorch up the TV screen.

Despite their wealth, jewels, palatial homes and million-dollar wardrobes, their behavior is crass, ugly and can even turn violent—so, a “shockingly” good time is had by all!

The most shocking brawl we saw on “Real Housewives” involved a wealthy matron with an artificial leg—which, in the heat of battle, she pulled off—
and used as a weapon!

Viewers also look down on shows like “The Bachelor,” which invites ambitious and avaricious women to compete for the “love” of a handsome and wealthy man.

It’s embarrassing to see them practically throwing themselves at him just to get his attention. Some of their “dates” are too hot for TV, but are teasingly played out (up to a point), just the same!