Celebs go all out to deck their Christmas trees | Inquirer Entertainment 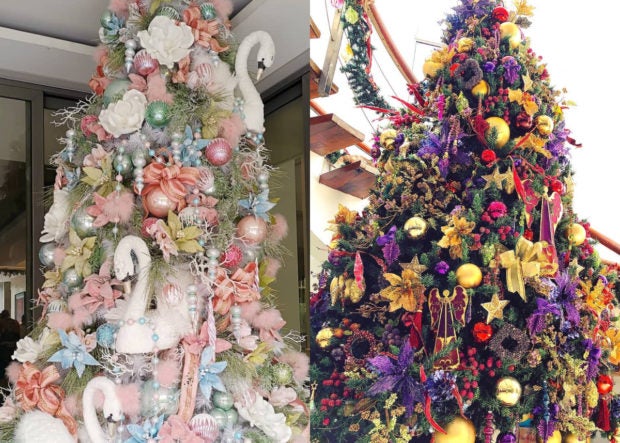 December has just begun and already, the feeling of Christmas drawing near is as evident as ever. Celebrities went out of their way, channeling their creative selves in the process, to decorate their Christmas trees.

For “Eat Bulaga” host Ruby Rodriguez, combining her love for the Yuletide season and superheroes make for the best holiday celebration, as seen on her Instagram on Nov. 24. She spruced up her Christmas tree with masks of Marvel Comics’ team of Avengers — Hulk, Spider-Man and Iron Man — alongside the usual green, red and gold Christmas baubles.

Comedienne and actress Pokwang opted to keep her Christmas tree traditional, as per a Nov. 25 post. Playing with the traditional red, green, white and gold colors associated with the season, Pokwang’s tree was decked with glittery white balls mimicking that of a snowball, miniature snowmen, as well as Santa Claus trinkets, artificial poinsettias, tree ribbon and star.

In a separate post, her daughter Malia appeared to have been scared out of her wits after being introduced to a miniature Santa Claus standing beside the Christmas tree.

A flowery Christmas is what singer Regine Velasquez probably has in mind for this year’s celebration. On Nov. 15, the singer opted to create her art piece with the traditional gold, green and silver ornaments.

The addition of blooms and pine cones made her tree stand out. In true Western Christmas fashion, she set a toy train under the tree.

Actress Maritoni Fernandez definitely shone like gold in her family photo with children Lexi and Liam, as seen via Instagram on Nov. 26. Deciding on a single color to decorate her tree, she played with different shades of gold for her trimmings.

For the wife of Sen. Manny Pacquiao, nothing beats a Christmas tree decked as fashionable as she is to mark the occasion. On Nov. 25, Jinkee strayed from tradition when she chose pastel colors over the usual vibrant hues that holiday ornaments are known for.

A playful mix of yellow, green, blue and pink decorations spruced up what could have been a plain Christmas tree. The highlight of her décor? White swans popping out from the branches, perfectly complementing the pastel theme of the tree.

Jinkee’s glamorous pastel tree gets even better when lit up.

TV host Korina Sanchez started decorating her trees in early October. Her first Christmas tree reminds one of a candy cane, what with its playful mix of reds and greens. Even her dogs couldn’t resist the charming holiday reminder.

For her second tree, which is yet to be unveiled, Sanchez opted to combine teal, brown and silver colors.

Meanwhile, her third tree, which has not yet been fully decorated as per her Oct. 26 post, emanates the Yuletide spirit with its delightful Santa Claus trinkets.

For actress Ina Raymundo, nothing says Christmas more than her 13-year-old Christmas tree motif. Decorated in a tasteful mix of violets, reds and golds, the tree exudes royalty like no other.

“I haven’t changed the motif of our Christmas tree since 2005,” she wrote. It’s been 13 years and I’m still mesmerized by its beauty. The ornaments that are used on this tree were accumulated through the years and will be an heirloom for my kids.” JB