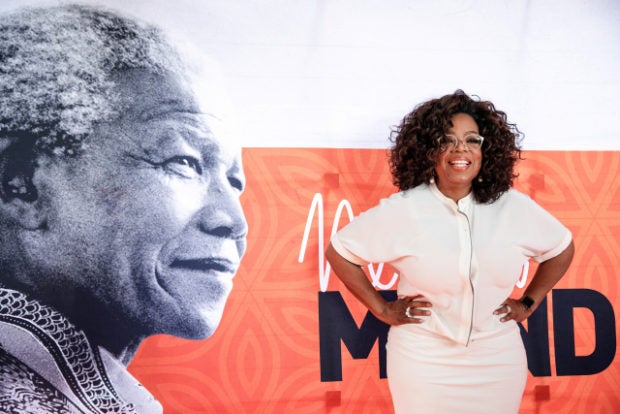 US TV personality Oprah Winfrey poses next to a banner depicting late former South African president Nelson Mandela at an event marking 100 years since his birth, at the University of Johannesburg, Soweto Campus, in Johannesburg on November 29, 2018. Image: AFP/Gianluigi Guercia

US television celebrity Oprah Winfrey on Thursday paid emotional tribute to Nelson Mandela as she prepared to host a star-studded concert in Johannesburg to cap celebrations marking 100 years since his birth.

The concert is the climax of a year of events celebrating the centennial of Mandela’s birth in 1918, and is part of a campaign to tackle poverty, child malnutrition and boost gender equality.

Winfrey hailed Mandela’s “goodness and integrity,” describing him as her “favorite mentor” as she spoke at a public debate at the Soweto campus of the University of Johannesburg.

“He was a man who could have sought revenge, but he was a man who sought reconciliation,” she said, adding he “knew that when one of us is wounded all of us are bleeding.”

Mandela was jailed under South Africa’s apartheid regime. After being released in 1990, he led the country’s transformation into a multi-racial democracy. He died on December 5, 2013 aged 95.

She said Mandela “could have actually crushed his opponents with his power but instead he chose to defeat them without ever” ever disarming them.

Former US president Barack Obama spoke in Johannesburg in July, delivering the flagship address of the “Mandela 100” celebrations, remembering the “wave of hope that washed through hearts all around the world” when Mandela was released from jail.

Tickets for the weekend concert were allocated to people who have taken part in the Global Citizen campaign.

The 64-year-old talk show queen spoke to hundreds of mainly women guests at an auditorium in Soweto, a township which was the hotbed of the struggle against apartheid.

“We all need to roll up our sleeves wherever you are whatever you can do and begin to build a new future,” she said in her speech.

“In doing that you align with Madiba vision — both compassionate and practical,” she said, referring to Mandela by his clan name.

Winfrey in 2007 founded a school in South Africa for girls from poor backgrounds to groom them into elite leaders.

Listening to the speech was Lumka Jwara, a 28-year old banker from the neighbouring township of Kagiso.

“She has done a lot for so many people, even indirectly, through her shows. Both she and Mandela are resilient, they have the ability to change other people’s lives,” said Jwara. CC

Read Next
Sharon Cuneta hints ‘Three Words to Forever’ may be last movie with Richard Gomez
EDITORS' PICK
WHO says fabric facemasks still work against virus variants
Is your company a growth champion? Stand up and be recognized!
UP president challenges AFP claim on Reds’ campus infiltration
Biden says Covid-19 expected to kill ‘well over 600,000’ in US
Acer Philippines welcomes you to its first flagship store
New Year, New Rediscoveries
MOST READ
Ate Vi’s message to those against ABS-CBN’s franchise renewal
Cop, 12 others killed in Maguindanao shootout
OVP spokesman tells Mocha Uson: Don’t drag us into your nonsense
UST students protest dismissal of Grade 12 student
Don't miss out on the latest news and information.