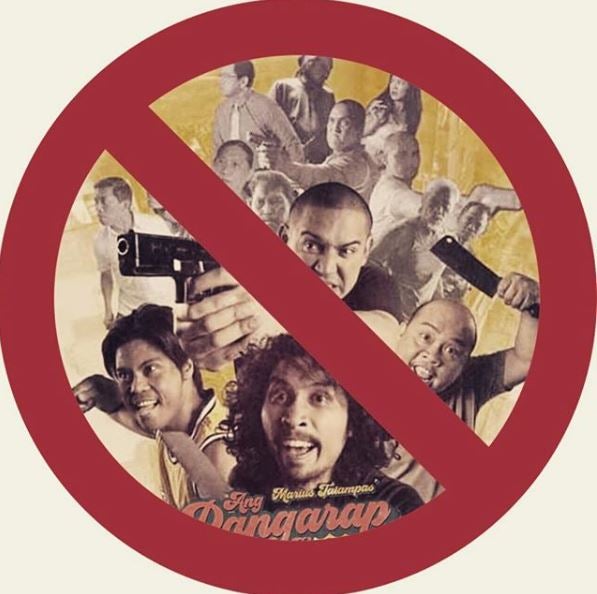 Actor Paolo Contis is certainly disappointed about his film “Ang Pangarap Kong Holdap” being unable to get any slots in the cinemas. For him, the film’s denial of a slot smells of blatant censorship, and in his exact words, the real holdup.

The comedy, written and directed by Marius Talampas, stars Pepe Herrera, Jelson Bay and Jerald Napoles along with Contis. It sees the three men as potential thieves out to orchestrate a heist to fulfill their dream of getting into the crime life.

According to Contis’ Instagram post on Nov. 25, it was lamentable that the film could not get any cinema slots, as they were told its title would send a negative message to viewers.

“Isang malungkot na araw (What a sad day)!” Contis wrote. “According to them, the movie is sending a bad connotation to the public because of its title (when our only intention is to entertain our audience and give a good laugh for less than 2 hours).”

Contis maintained that the movie’s purpose was to offer reprieve and make the audience laugh, saying, “This is our own way of making it light for the Filipino people.”

He pointed out that it was the cinemas who were the real hold-uppers and called on to his fans to support local films.

“We think what you’re doing is the REAL HOLDAP,” Contis said. “#SupportFilipinoFilms #SarilingAtin.”

Contis’ girlfriend LJ Reyes also came to his support as she took to her own Instagram account on the same day to share her sentiments regarding the issue.

As per Reyes, “Ang Pangarap Kong Holdap” was rated R-16 by the Movie and Television Review and Classification Board because the film has themes not apt for children below sixteen. However, being an artist and a viewer herself, she could not help but feel sad over the film’s fate.

She cited director Talampas’ ingenuity and “impeccable timing” as what makes the film such a good comedy. She also spoke highly of the cast’s natural chemistry with each other.

“This is the first time the four main cast worked together, but each brought a flavor of his own, injecting their own kind of humor and character,” Reyes said.

This is a sad day. The movie has been rated R-16 by the MTRCB, which means only 16 yrs old and above are allowed to watch the film. Kids below 16 yrs. old are not allowed because of some language and content. As a parent, I appreciate and respect this rating and would’ve rated this movie the same. However, as an artist and audience (who has already seen the complete edit of the film), I am deeply saddened. Why? 1. Marius Talampas’s witty comedy as a writer and impeccable comedic timing and visuals as a director make this film unique from it’s contemporary. 2. The chemistry of the cast was undeniably strong! This is the first time the four main cast worked together, but each brought a flavor of his own, injecting their own kind of humor and character. Supporting cast were also great as their characters. Hint: A hilarious comedic injection from Pen Medina was for me one of the funniest punch lines in the movie! Not one soul in the theater was quiet at that time! 3. I just think it’s so ironic that we support foreign films orchestrating grand heists or films that just follows male-character-driven adventures, but cannot support our own just because of the title. How often have we said “DON’T JUDGE THE BOOK BY ITS COVER!” but still we do every chance we get. It’s upsetting that we are limiting our fellow people, our artists, to create materials that the only intention was to make other people laugh, so they can lighten up somebody’s lonely day or maybe a group of friends just wanted to have some laugh or take a break from a stressful day. The MTRCB rating exists for a reason, and we support and respect that. We are happy to be given an opportunity to make young adults and older a chance to laugh and relax! What we are so unhappy about is that doors are being closed on us just because of the title used by the film to attract audience. It may not be an ideal situation because it’s a fictional story created to make the audience laugh. It may resemble reality, but it is not reality. Just like the foreign films we all love and support. Let’s not forget it’s a comedy film not a documentary. #SupportFilipinoFilms #SarilingAtin

She also found the lack of support for “Ang Pangarap Kong Holdap” ironic, considering that foreign films of the same nature get much support: “We support foreign films orchestrating grand heists or films that just follows male-character driven adventures, but cannot support our own just because of the title.”

After all, the film’s only intention, said Reyes, was to “make other people laugh, so they can lighten up somebody’s lonely day or maybe a group of friends just wanted to have some laugh or take a break from a stressful day.”

Moreover, she pointed out that the film, no matter how ludicrous it may be, is still fiction, a comedy, and “not a documentary.”

“It may not be an ideal situation because it’s a fictional story created to make the audience laugh,” Reyes explained. “It may resemble reality, but it is not reality.” JB

Having a baby brings luck to Paolo Contis