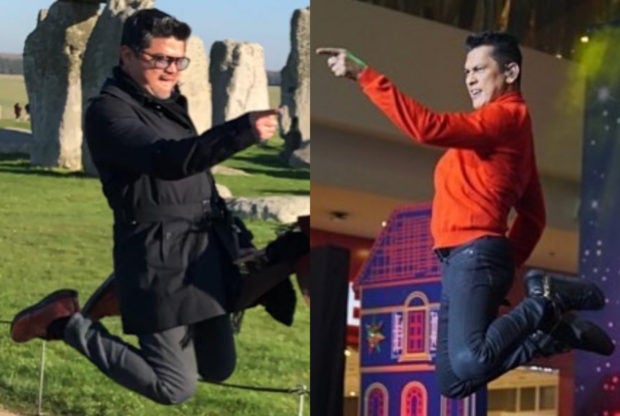 The jump shot has been a staple for TV personalities Julius Babao and Christine Bersola-Babao whenever they visit a foreign country. During their latest trip to the United Kingdom, Babao upped his jump shot game by imitating some of the moves singer Gary Valenciano is known for.

The couple performed their customary jump shot during their visit to the Stonehenge, a famous prehistoric monument, as seen in the photo he posted on Instagram last Monday, Nov. 19. While Julius “loves” his “bro” Martin Nievera, he chose to channel his “inner” Valenciano this time, whose signature moves include acing a high jump in his performances.

Christine, meanwhile, shared a collage of their jump shot photos in front of world-famous structures, such as the Eiffel Tower and Louvre Pyramid in France, the Hollywood sign in the United States, and the Sydney Opera House in Australia.

Aside from visiting the Neolithic monument, the couple also dropped by the Roman Baths which is a well-preserved Roman site once used for public bathing.

#TheRomanBaths #juliusandtintintravels #juliusandtintinbathengland @juliusbabao The Roman Baths complex is a site of historical interest in the English city of Bath. It is a well-preserved Roman site once used for public bathing. The Roman Baths themselves are below the modern street level. Wikipedia Did you know: The site includes the remains of the Temple of Aquae Sulis, the Roman baths fed by the sacred hot spring, and a well-presented museum of artifacts found at the site. sacred-destinations.com

Christine made sure she has a photo of herself to treasure in front of the U.K.’s iconic red telephone booths.

The lucky couple even had the chance to meet “Hamilton” star Jamael Westman after the show.

Meeting Mr. Hamilton himself, Jamael Westman after the show. @hamiltonmusical is truly a gem worth seeing! To be honest I wasn’t really a fan of American history but after watching the play I am intrigued and have an urge to learn more about the life of one of America’s founding fathers, Alexander Hamilton. The London hip-hop musical had a superb cast which includes our very own @gorachelleann & @christineallado ! These lovely ladies rocked the house! As a fellow Filipino it makes you proud to see them perform in this groundbreaking musical. Bravo Hamilton! #hamilton #juliusandtintinlondon2018 #juliusandtintin

Of course, any trip will not be complete without indulging in gastronomic fare. For Christine, their lunch at Covenant Garden was “lovely.”

The two also engaged in a competition during their lunch at Burger & Lobster. Christine asked her fans who among them made a better imitation of the face on their bibs.

To end their night on a high note yesterday, Julius took Christine out on a date at Berners Tavern, a glamorous restaurant under the direction of celebrated Michelin-starred chef Jason Atherton.

WATCH: Christine Bersola, Julius Babao give a tour of their ‘bird-inspired’ home

The entrepreneur in Christine Bersola-Babao