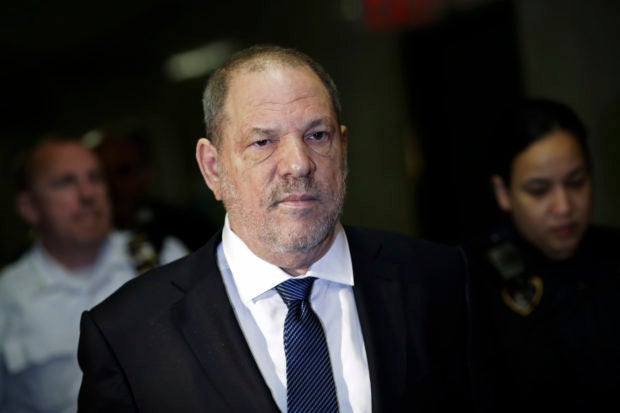 NEW YORK — New York prosecutors pushed back Monday against Harvey Weinstein’s latest attempt to have the criminal case against him dismissed, saying there is “ample evidence” to move forward with the sexual assault charges against the former Hollywood producer.

In new court filings, the Manhattan district attorney’s office played down the witness coaching allegations against the lead detective in the case, saying the indictment against Weinstein should stand despite prosecutors’ recent decision to dismiss one of the six counts.

“There is no possibility that this issue in any way impaired the integrity of the grand jury or prejudiced the defendant,” Assistant District Attorney Kevin Wilson wrote in the motion.

“In truth, the only reason the defendant wants a hearing is to provide a public circus that will further the public relations campaign the defendant has been waging from the outset of this case,” Wilson wrote.

Weinstein lawyer Benjamin Brafman countered in a statement that “it is they who created the circus with the DA and the NYPD calling each other liars.”

Monday’s back-and-forth came two weeks after Weinstein’s lawyers asked a judge to jettison the entire case, citing evidence that Detective Nicholas DiGaudio told a witness to keep quiet when she raised doubts about the veracity of a sexual assault allegation against Weinstein.

Prosecutors also have disclosed an allegation that the same officer urged another Weinstein accuser to delete material from her cellphones before handing them over to prosecutors. The material did not pertain to Weinstein, prosecutors said, and ultimately was not deleted.

Weinstein’s attorneys have described DiGaudio as “a serial obstructer” who was “singularly hell-bent on concealing the truth.” The officer’s conduct prompted the district attorney’s office to dismiss a count that alleged Weinstein forced Lucia Evans to perform oral sex in 2004 when she was a college student and fledgling actress.

Weinstein, 66, was originally charged with assaulting three women. He denies all allegations of nonconsensual sex.
In their attempt to have the case dismissed, Weinstein’s lawyers accused prosecutors of failing to show the grand jury evidence that they contend undermines the charges.

Wilson, the assistant district attorney, countered Monday that prosecutors have no obligation to present to the grand jury evidence favorable to a defendant.

“A review of the grand jury minutes will reveal that evidence was presented properly and with correct legal instructions,” Wilson wrote in the filing.

Brafman, the defense attorney, said he plans to file a reply to the prosecution’s motion after Thanksgiving. MKH