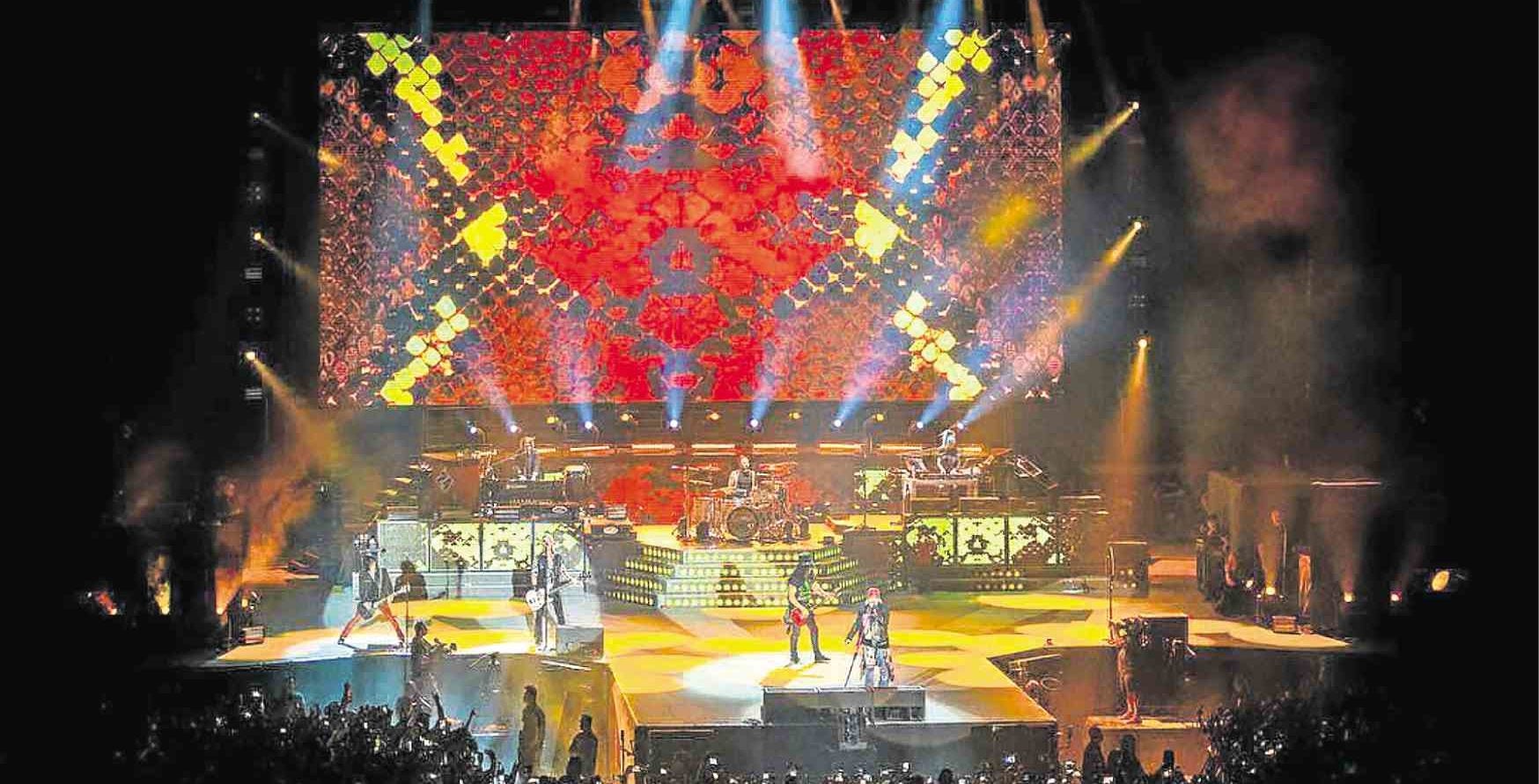 The musicians seemed to have established a rapport strong enough to serve a focused and frenetic three-hour set. —PHOTOS COURTESY OF MMI LIVE

Not in this lifetime,” the rock icon Axl Rose told a gaggle of paparazzi hounding and asking him one night in April 2012 about the prospect of sharing the stage once more with his former Guns N’ Roses bandmates.

Little did he know then—or did he?—that that dismissive response would end up being the title of the reunion concert tour fans all over the world had been yearning for.

All they needed was just a little patience.

In 2016, lead vocalist Axl, and the two other founding members, guitarist Slash (Saul Hudson) and bassist Duff McKagan, played together for the first time in more than two decades, setting aside their knotty, acrimonious past.

By the time the tour made its stop here in the country—at the cavernous Philippine Arena earlier this month—the three musicians seemed to have already established a rapport strong enough to serve a focused and frenetic three-hour set.

Sporting his signature red bandana, leather jacket and flannel shirt wrapped around the waist of his distressed jeans, Axl showed the Filipino audience that, at 56, he was still an unrelenting showman, attacking each of the night’s 28 songs with nary a dip in intensity and ferocity. In “Live and Let Die,”         he ran around, sweating bullets, then hoisted the microphone stand over his head while Slash did some serious shredding at the back.

The repertoire, which featured songs from the band’s expansive discography, was a balanced assortment of head-banging metal numbers, sweeping and anthemic, power ballads, and bluesy midtempo tunes: “It’s So Easy,” “Patience,” “This I Love,” “Welcome to the Jungle,” “Nightrain,” “Paradise City,” “Rocket Queen,” “Estranged,” “Coma” and “November Rain,” which had Axl playing the piano and the crowd waving their lighted phones.

The band also covered fan favorites like Soundgarden’s “Black Hole Sun,” Glen Campbell’s “Wichita Lineman” and Bob Dylan’s “Knockin’ on Heaven’s Door”—perhaps the night’s most interactive moment, with Axl and the fans taking turns singing their hearts out in the chorus. And before briefly taking over the singing duties for The Misfits’ “Attitude,” Duff—much to everyone’s amusement—quipped: “Manila, t*ngina!” 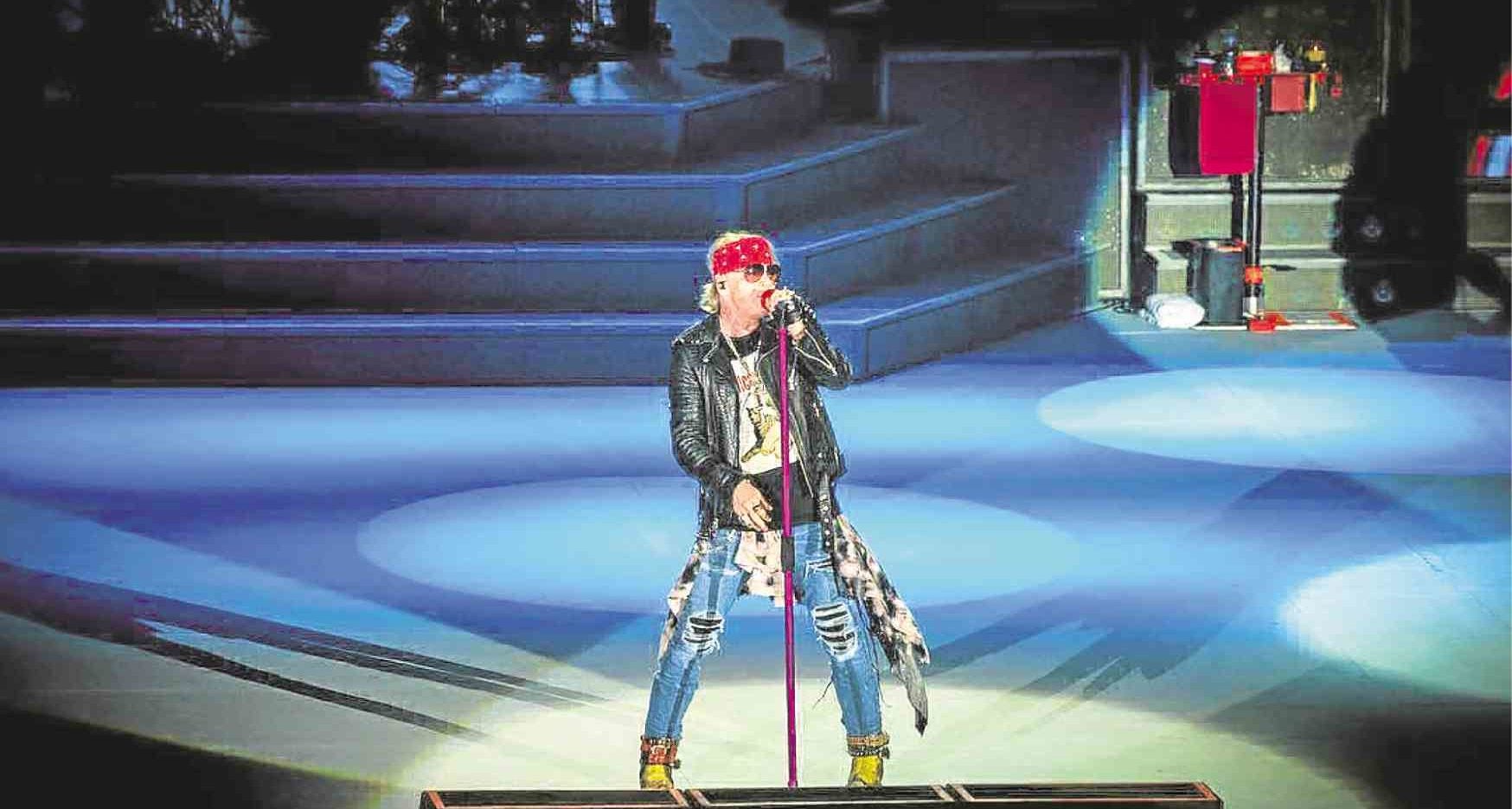 Axl proved that, at 56, he was still an unrelenting showman.

Axl’s voice was in a decent shape throughout, dispensing his piercing shrieks, albeit in a more strategic manner. When he wasn’t going all-out at the top of his throat, he used his craggy middle register to conserve his voice.

It was midway in the concert—mounted by MMI Live—that things started to heat up. In a showcase of musical virtuosity, agility and endurance, Slash launched into a drawn-out and sultry solo that started out rather leisurely, before racing into a showy stretch peppered with bursts of weeping riffs. 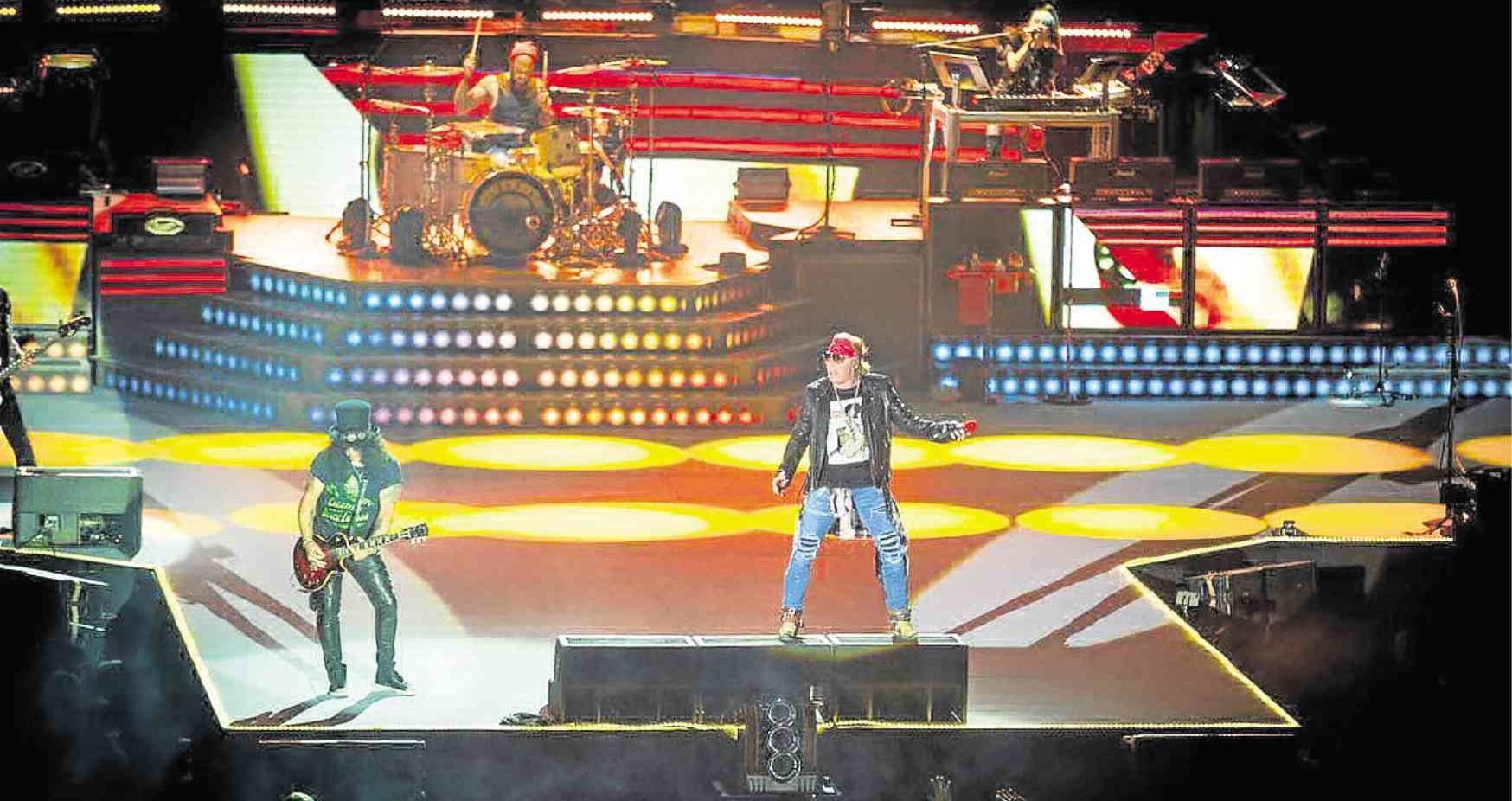 With his fingers snaking up and down his guitar’s throat, Slash segued into a haunting take on “The Godfather” theme “Speak Softly Love,” which ultimately morphed into that unmistakable guitar intro of “Sweet Child o’ Mine.”

And, as if on autopilot, those who were still in their seats jumped up and, from then on, never let up.