“I still have bills to pay,” said model-turned-actress Cora Waddell when the Inquirer asked whether she planned to quit show business now that she was infanticipating. “Just because you have a baby or choose love doesn’t mean you can’t work. That’s crazy!”

Cora said she had no intention of laying low at work, even though she was already five months pregnant. “I hear this a lot. But working moms should be treated the same way. The way society is now, I feel that we’re a lot more accepting of people being able to do many things at once,” she said during the recent media gathering for her project, Jose Javier Reyes’ “Recipe for Love.”

“They are inspiring to me. I hope I can inspire other women, too,” Cora pointed out.

Only in July, Cora married businessman Terence Lloyd, whose family is based in Australia. 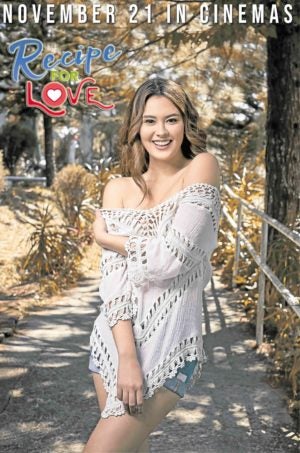 “My husband and I never dated. We were friends for eight years before we got married,” she said. “We were always flirting. I thought he wasn’t serious, that he was just like that with every girl; but he told me: ‘It’s always been you.’”

Cora added: “I’ve always had a crush on him. He’s a little bit of every guy I liked in my life. I guess you know you’re meant to be with this person when you find all your favorite flavors in one dish, so to speak.”

Asked how she found married life so far, Cora said: “It hasn’t been very long, but so far, so good. His patience, dedication and commitment, as well as the advice he’s giving me, I wouldn’t be able to get from anybody else.”

Not her finest moment

Cora was introduced as a housemate of the seventh season of “Pinoy Big Brother: Lucky 7.” She placed seventh. She admitted that her stint as a housemate was not her “finest moment.”

“I should have been more patient,” she explained. “Temper runs in the family. We’re hot-headed women. If Momma’s not happy, then nobody’s happy. I should have tried to assume the ate role, instead of fighting (with everyone). I was going through a lot of things then—I just came from a bad breakup.”

She said the best gift she received for joining “PBB” was “the friendship that I formed with my housemates. In the house, you’re always competing. When it’s finished, you then become just happy for everyone because we all survived. You love them because you got to know them and, at one point, you were like siblings.”

Asked for her advice to new housemates, Cora said: “Do your best. I’m remembered for a lot of my hard moments, but whenever I go back and watch the series, I get impressed [with myself] because I know I did my best. Never give up no matter how many times your housemates vote for your eviction.”

Cora said it’s always best to be “honest with yourself. If you’re angry or happy, if you’re having a hard time or feeling giddy, just be honest. Nobody wants to see a faker.”