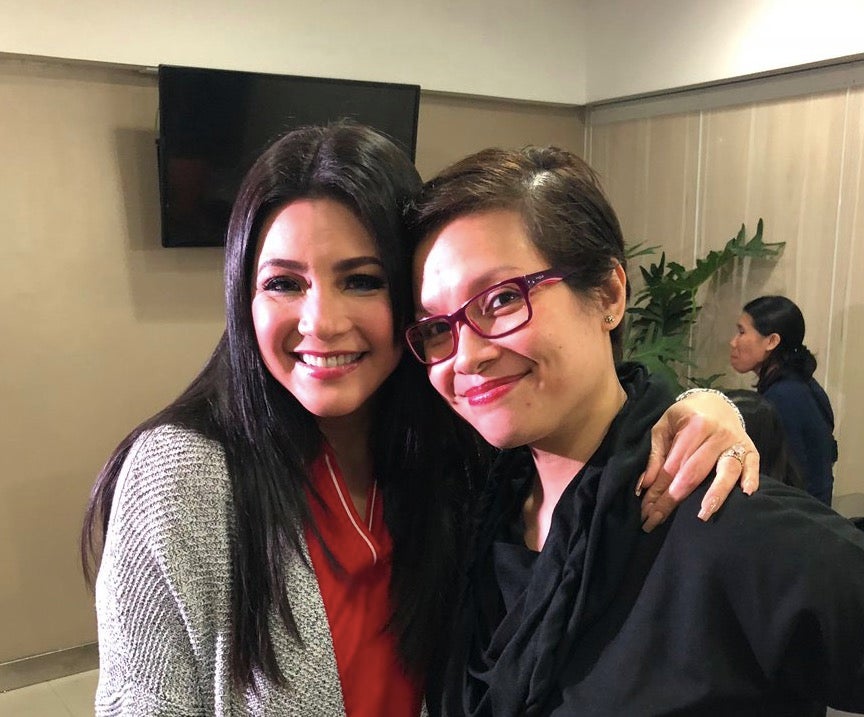 Lea Salonga and Regine Velasquez promised to one day do a concert together.

A photo of the two top singers in Philippine show biz was shared in a Nov. 16 tweet by MJ Felipe. He wrote, “First time in one frame – Regine Velasquez and Lea Salonga. They promise to work and do one concert.” 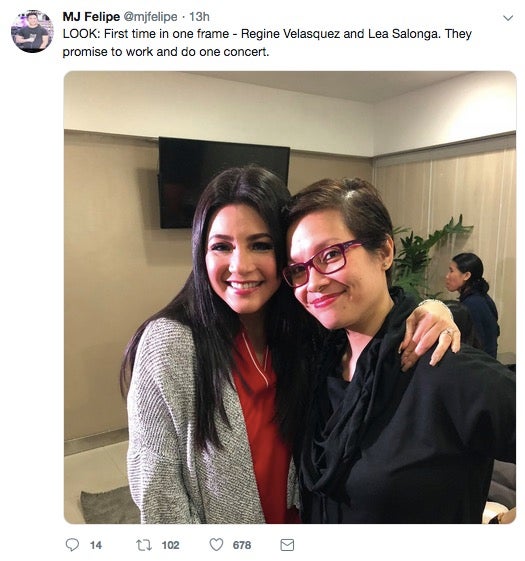 Salonga recently came back to the country to watch the 15th anniversary concert of Jed Madela, which was held at the Smart Araneta Coliseum on Friday, Nov. 16. The show also featured Velasquez, Madela’s idol and reason for being a singer, as they both sang a duet for “Somewhere over the Rainbow.”

Though the tweet did not mention where Velasquez and Salonga met, they possibly saw each other somewhere in the concert area.

Before that concert between Velasquez and Salonga happens, should it happen, Velasquez will spend time as a judge on the upcoming singing reality competition show “Idol Philippines.” She also has other shows lined up after she moved to the Kapamilya network.

Meanwhile, Salonga’s official website showed the Broadway star is booked for performances up until May. So if a concert with Asia’s Songbird does happen in 2019, it may fall on the second half of the year. For now, fans of the two singers can only hope and pray the concert happens sooner than later.  /ra

ADVERTISEMENT
Read Next
Regine Velasquez: In half of my career with GMA, I didn’t have a contract
EDITORS' PICK
INQUIRER.net at 23: We Are You
‘Quinta’ now over Mindoro strait; Signal No. 3 up northwest of province
Becoming you, INQUIRER.net grows a year older, wiser
Maine Mendoza, ‘Creative It Kids’ showcase vivo V20 series design and camera technology in live launch
vivo V20 series with superb features, stunning color options now available for pre-order
SMDC’s ‘Gold’ standard
MOST READ
Typhoon Quinta update: Signal No. 3 in parts of Batangas, Mindoro
‘Hindi ako duwag:’ Parlade denies hand in CPP-NPA ‘persona non grata’ posters in Manila
Rosario Domagoso, mother of Manila mayor, dies at 74
Class, work cancellations due to Typhoon Quinta
Follow @ABayleINQ on Twitter
Don't miss out on the latest news and information.