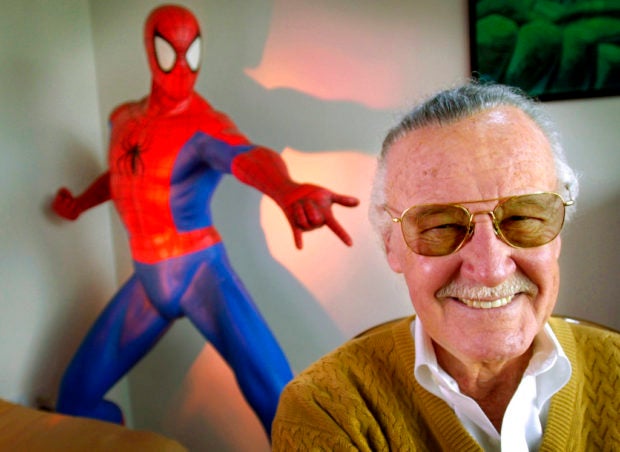 FILE – In this April 16, 2002, file photo, Stan Lee, 79, creator of comic-book franchises such as “Spider-Man,” “The Incredible Hulk” and “X-Men,” smiles during a photo session in his office in Santa Monica, Calif. Comic book genius Lee, the architect of the contemporary comic book, has died. He was 95. Image: AP Photo/Reed Saxon, File

Jimmy Kimmel remembered his idol, the late Marvel Comics legend Stan Lee, by sharing a drawing he made of him as a kid.

In the “Tonight with Jimmy Kimmel” host’s drawing of Lee, the comics icon can be seen wearing a superhero costume and holding a pencil as his weapon. Kimmel posted his remembrance of Lee on Tuesday, Nov. 13.

Kimmel also shared a story about his drawing: “At age 7, I drew this weird portrait of Stan Lee and asked my Mom to send it to him.” However, his mother was not able to send it.

Still, he said he was thankful Lee never received it then. Why? Because he was later able to personally give it to Lee, whom he called “the great one,” some 30 years later.

At age 7, I drew this weird portrait of Stan Lee and asked my Mom to send it to him. Thankfully she didn't because 30+ years later, I got to give it to the great one in person. Thanks for all the fun Stan #Excelsior pic.twitter.com/IpfYBSjWyf

Netizens had several reactions on the post, such as Washington Post columnist Holly Figueroa O’Reilly who said she laughed at Kimmel’s drawing until she cried, particularly for its unique depiction of the icon as having “giant boobs, dirty knees, tiny waist…”

As a mom of 5, this made me laugh until tears rolled down my face.

Then 7-year-old @jimmykimmel's drawing of Stan Lee has everything:

Meanwhile, FeliciaC  (@FeliciaC15) said she could not believe that the host was a good artist at 7 years old. She even disputed that he may have been 12 at the time he sketched the drawing.

Another, Mulan (@scrunch_ie), lauded Kimmel for having “mad skills” to draw his portrait of Lee.

those are some pretty mad skills for a 7-year-old

Lee died on Monday, Nov. 12, at the Cedars-Sinai Medical Center in Los Angeles, California, United States, at age 95. Tributes soon poured in from Marvel movies stars, such as Robert Downey Jr., Chris Evans and Mark Ruffalo, among others. JB