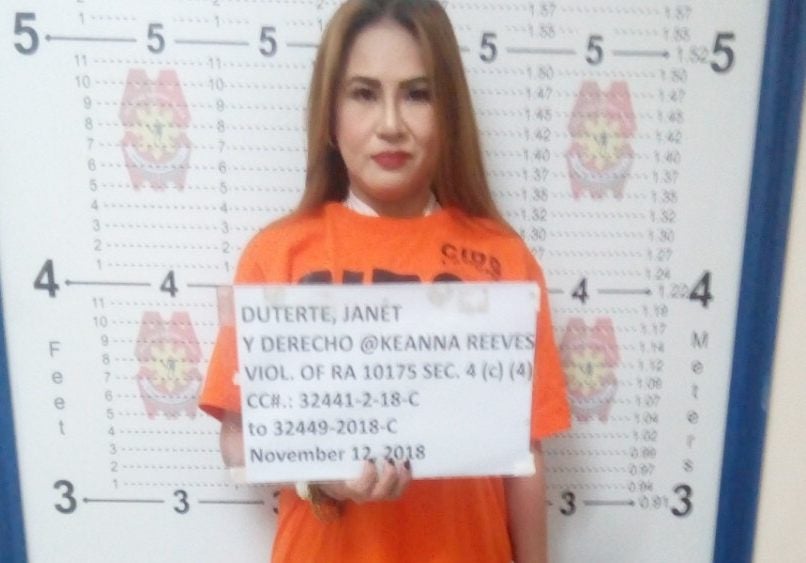 SAN PEDRO CITY–Entertainment celebrity Keanna Reeves on Tuesday posted a P90,000-bail for nine counts of cyber libel filed against her by a bar owner whom she had allegedly verbally attacked through Facebook live.

Reeves, or Janet Derecho Duterte in real life, is set to be released after spending the night at the Criminal Investigation and Detection Group (CIDG) office in Laguna.

The actress was arrested in Quezon City around noon on Monday.

Judge Maria Florencia Formes-Baculo of the regional trial court branch 34 in Calamba City issued the arrest warrant on November 7 based on the complaint filed by Nancy Dimaranan on July 14.

Chief Inspector Zyrus Serrano, chief of the CIDG-Laguna, said the case stemmed from Reeves’ “negative” remarks on Dimaranan,  the owner of a comedy bar in Biñan City, Laguna where the actress was invited to perform last July.

“According to the complaint, [Reeves] was paid her talent fee and P1,500 for taxi fare,” Serrano said in a phone interview, Tuesday, as Reeves, accompanied by friends and relatives processed her bail.

The police officer said the actress was apparently unhappy about taking a cab and expressed her displeasure at Dimaranan by going live on social media hours after her performance. /jpv