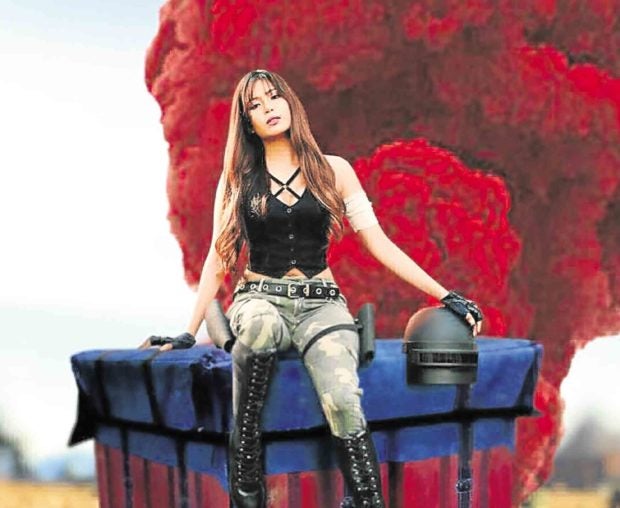 “If you’re really good at it, you can actually make money out of online gaming,” declared actress Myrtle Sarrosa, who recently joined an international gaming competition in Bangkok, Thailand, and placed ninth in the Showmatch category.

“It’s actually a big deal,” Myrtle, also a known cosplayer, said of her performance in the tilt. She is the first celebrity to become the country’s representative in an international e-sports and gaming competition.

Myrtle was one of four members of the PH squad, called Aether Dogz, which competed in the game called PUBG, or PlayerUnknown’s Battlegrounds in the “Omen by HP Challenger Series” tournament, held from Nov. 1 to 3. The team finished ninth.

Team Philippines ranked ninth out of 20 teams from 11 countries in the Asia-Pacific region. “We’re so happy and grateful. We did well against these teams with 80 players each,” she beamed. “In other countries, people invest in gamers, who are housed in one location and are paid just to play video games.”

“Imagine how tough it was to have played with professionals in Thailand when we’re just amateurs. It was amazing to find out that we ranked that high,” Myrtle stressed.

She said the first game she ever played was Pokemon for Gameboy.

“I then moved on to games on [the console] Playstation, and then later on PC (personal computer). Before, everything was just for fun. It was a way for me to de-stress. It actually became more interesting when I realized that I could gain recognition for it,” she explained.

Now, she has friends from show biz, like Arjo Atayde, Vin Abrenica and Nash Aguas, whom she said have started to show interest in online gaming, particularly PUBG.

“It’s a ‘Battle Royale’ kind of game where you need to strategize in order to survive,” she explained. “You either go solo, or be part of a duo or a squad. Then you compete against 100 players from different parts of the world,” explained Myrtle.

“This should really just be for enjoyment; but there are people who are really talented in gaming—they have a quick eye and are good at strategizing. If you’re one of them, I say you might as well make the most out of your passion,” said the cast member of Regal Entertainment’s romantic comedy flick “Recipe For Love.”

Read Next
1D reunion a ‘bleak’ prospect for Zayn
EDITORS' PICK
Every Filipino home can now be a smart home with realme TechLife
PLDT Home Prepaid WiFi customers now under the care of Smart
Nestlé Philippines’ ‘NESCAFÉ Plan’ bags Grand Anvil at PRSP 56th Anvil Awards
Wesley So officially a US citizen
‘Pilgrim of peace’ Pope Francis heads to war-scarred Iraq
WHO: Arrival of vaccines in PH ‘a powerful step’ towards economic recovery, normalcy
MOST READ
Kris Aquino dispels rumors on son Josh getting married, thanks Ogie Diaz for defending him
LTO’s P500-M deal for screws draws scrutiny
Wesley So officially a US citizen
Ginebra trades Slaughter to NorthPort for Standhardinger
Don't miss out on the latest news and information.